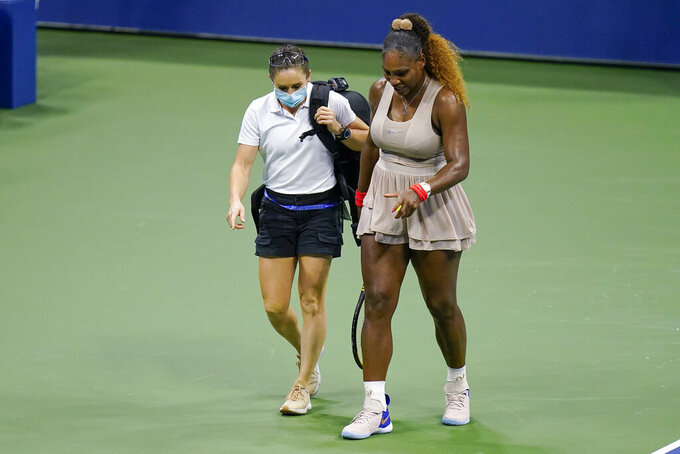 FILE - In this Sept. 10, 2020, file photo, Serena Williams walks to her bench with a trainer for a medical timeout during a semifinal match of the U.S. Open tennis championships, against Victoria Azarenka, of Belarus, in New York. (AP Photo/Seth Wenig, File)

Serena Williams won her first Grand Slam title at age 17 and now that she’s pushing 40, she’s still making it to the late stages of major tournaments.

Impressive as that might be, it’s not enough for her. She wants a 24th Grand Slam singles trophy.

“A semifinal is always great. Is it great for me? Absolutely not. That’s just how I feel. That’s how I always feel,” Williams said in Paris on Saturday, her 39th birthday and the day before the pandemic-postponed French Open begins.

Since setting an Open-era record with her 23rd major singles championship at the 2017 Australian Open while pregnant, Williams has reached four Grand Slam finals, losing each. She made it to the semifinals at the U.S. Open two weeks ago, when she stretched her left Achilles tendon and lost in three sets to Victoria Azarenka.

Only one player in tennis history has won more Grand Slam singles titles: Margaret Court, who collected 24 across the amateur and professional eras.

“I wouldn’t be playing if I didn’t think I could perform,” said Williams, who flew from New York to Paris to rehab her Achilles and train on clay courts at her coach’s academy. “I’m not at 100%, physically. But I don’t know any athlete that ever plays ... when they’re feeling perfect.”

“I honestly never thought I would be playing at my age. I mean, I don’t quite look 39,” Williams joked. “But, yeah, I don’t know when it’s going to stop for me. I just have fun. When I feel it’s over, it’s over. But I could have guaranteed and pretty much bet my life that I would not have been playing at 39. This is why I don’t bet.”

Here are other things to know about the 2020 French Open:

Novak Djokovic already would have been closely watched in Paris — he is, after all, ranked No. 1 and seeded No. 1 and won five of seven Grand Slam tournaments to raise his total to 17 major titles, closing the gap with Roger Federer (20) and Rafael Nadal (19).

Now Djokovic’s every emotion could be scrutinized at a tournament he won in 2016, because it his first Grand Slam appearance since getting disqualified at the U.S. Open this month for accidentally hitting a line judge with a ball hit in anger after dropping a game in the fourth round.

“That’s something that is obviously staying in my mind after what happened in New York. It’s going to stay there for a long time. Of course, I will make sure I don’t make the same mistake twice. It happened. Whatever happened, happened. I had to accept it and move on. Of course, it was a shock for me and a lot of people. But that’s life, that’s sport. These things can happen,” Djokovic said Saturday.

“But I don’t think that this will have any significant negative impact on how I feel on the tennis court.”

He noted his title last week at the Italian Open in his return to to action.

“I did not feel any kind of emotional disturbance or difficulty to actually be able to play or still express my emotions in whatever way,” Djokovic said. “Of course, I try to keep my negative reactions on the court as (few) as possible. But I guess it happens as well. I’m not going to be down on myself because of that.”

It seems quite clear that the coronavirus will hover over the French Open much like it did the U.S. Open, with test results as newsworthy as tennis results. After all, the COVID-19 outbreak is why the tournament was moved from May until now. More than a half-dozen players already were dropped from competition — qualifying or the main draw — either because they tested positive in Paris or came in contact with someone who did. One former member of the Top 10 and a past Grand Slam semifinalist, Fernando Verdasco, said he was kicked out of the French Open because of what he believes was a false positive. With the number of virus cases in France growing, daily spectators will be limited to 1,000, with 750 ticket-holders (who will be selected by lottery) and 250 people in VIP or sponsor seating. “It’s not the tournament I played in before,” eighth-seeded Frenchman Gael Monfils said. “It won’t be the same tournament I dreamed of.”

Brrrr. With a fall-time French Open replacing the usual spring-time setting, the forecast calls for near-daily rain — good thing there is finally a $55 million retractable roof on Court Philippe Chatrier — and temperatures in the low 60s Fahrenheit (around 16-18 Celsius) during Week 1. “A little bit weird,” 2018 champion Simona Halep said. “It is a little bit too cold, to be honest.” She and other players have noted that the chill can affect play, too, making balls zip through the air less quickly. On the other hand, this was 2016 French Open champion Garbiñe Muguruza’s take on the circumstances: “I don’t really care (about) the weather or the month. I’m just happy to be here competing.”