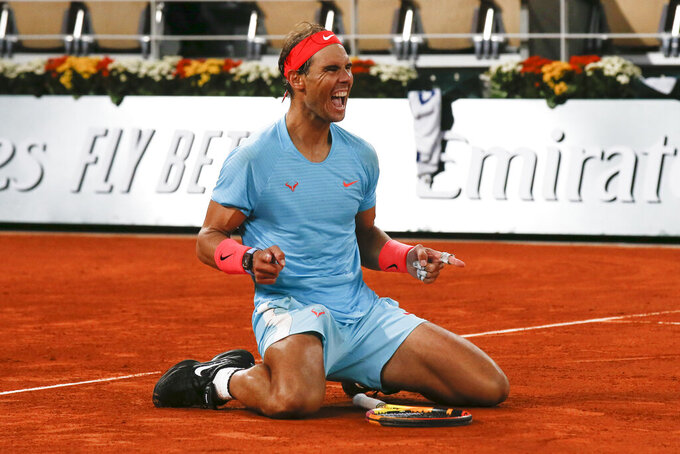 FILE - Spain's Rafael Nadal celebrates winning the final match of the French Open tennis tournament against Serbia's Novak Djokovic in three sets, 6-0, 6-2, 7-5, at the Roland Garros stadium in Paris, France, in this Sunday, Oct. 11, 2020, file photo. The AP has put together a quiz for you to test your knowledge before the clay-court major championship begins Sunday. (AP Photo/Michel Euler, File)

How well do you know the French Open, the Grand Slam tennis tournament that begins Sunday in Paris? Give this AP quiz a try:

1st Round: Among the many numbers associated with Rafael Nadal's success on red clay is this: He has won 53 of 54 matches for his career on the surface against opponents ranked outside the Top 100. Who is responsible for the only such loss by Nadal? (Bonus: When and where did that match take place?)

2nd Round: Sisters Serena Williams (23) and Venus Williams (7) have won a total of 30 Grand Slam singles titles between them. How many major singles trophies have been won by all other active women combined?

4th Round: Ash Barty won the 2019 French Open for her first Grand Slam title, then sat out the tournament last year while staying home in Australia because of the coronavirus pandemic. Barty returns this year and will try to become the first woman since who to win the championship at Roland Garros in consecutive appearances that were not in consecutive years?

Quarterfinals: Bjorn Borg won his then-record sixth trophy at Roland Garros the day after his 25th birthday in 1981. It was his 11th Grand Slam title. How many more times did Borg enter the French Open?

Semifinals: Last year, Rafael Nadal beat Diego Schwartzman in the semifinals to reach his 13th French Open final en route to his 13th French Open title — extending two records he already held for the event. By beating Novak Djokovic to win the championship, Nadal collected his 100th match win at the tournament, yet another mark, improving his record there to 100-2. Who holds the record for most match wins at any Grand Slam tournament? (Bonus: Which tournament and how many wins?)

Women’s Final: Iga Swiatek earned her first Grand Slam title at the 2020 French Open without dropping a set along the way, including a 6-4, 6-1 victory over Sofia Kenin in the final. Who was the last woman before Swiatek to win the trophy at Roland Garros by winning every set she played during the tournament?

Men’s Final: Rafael Nadal's 6-0, 6-2, 7-5 win over Novak Djokovic last October in the French Open final ran the Spaniard's current winning streak at Roland Garros to 28 matches. That's not even his second-longest unbeaten stretch at the place (31). What is Nadal's longest streak of matches won in a row there?

2nd Round. a. Those 27 title are shared among 15 women. Tied for third among active players, behind the Williams sisters, are Naomi Osaka and Kim Clijsters, with four Grand Slam singles trophies apiece.

3rd Round. d. Sinner beat 11th-seeded David Goffin 7-5, 6-0, 6-3 on a rainy Day 1 of the 2020 tournament, which was moved to late September because of the coronavirus pandemic. That was the French Open debut for Sinner, a teenager from Italy, who would go all the way to the quarterfinals before losing to Nadal.

4th Round. b. Evert won the 1974-75 trophies in Paris, sat out the French Open in 1976-78 — part of a stretch when she preferred to play World TeamTennis — then returned in 1979 to take the third of what would become a women's-record seven titles at Roland Garros.

Quarterfinals. a. After Borg's 1981 triumph in Paris, the Swedish superstar lost to John McEnroe in the finals of Wimbledon and the U.S. Open later that year, but never entered another Grand Slam tournament. He announced his retirement in 1983, then made a brief comeback in the early 1990s, without appearing at a major.

Semifinals. b. Navratilova went 120-14 in singles at Wimbledon, well ahead of Federer's 101 wins there and 102 at the Australian Open. Serena Williams has won 106 matches at the U.S. Open, and Chris Evert won 101 there.

Women’s Final. a. Henin was not even pushed to a single tiebreaker while rolling to her third consecutive championship in Paris — and second in a row without losing a set. The Belgian beat Serena Williams 6-4, 6-3 in the quarterfinals, Jelena Jankovic 6-2, 6-2 in the semifinals and Ana Ivanovic 6-1, 6-2 in the final.

Men’s Final. d. 39. Nadal began his French Open career with 31 straight victories, until a stunning fourth-round loss to Robin Soderling in 2009. The next year, Nadal began his best run in Paris, going 39-0 from 2010 until a quarterfinal loss to Djokovic in 2015 ended a streak of five consecutive titles at Roland Garros.