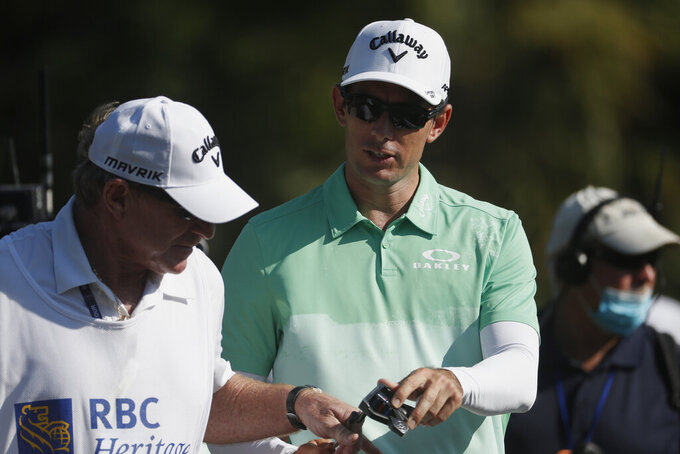 Dylan Frittelli, right, of South Africa, confers with his caddie on the 17th hole during the first round of the RBC Heritage golf tournament Thursday, June 18, 2020, in Hilton Head Island, S.C. (AP Photo/Gerry Broome)

CROMWELL, Conn. (AP) — Dylan Frittelli became the fourth PGA Tour player to test positive for the coronavirus and had to withdraw from Rocket Mortgage Classic next week in Detroit.

Frittelli missed the cut at the Travelers Championship, playing the opening two rounds with Ian Poulter and J.T. Poston. The South African player took a saliva test so he could take the tour's charter to Detroit, and the result came back positive Sunday.

“I am experiencing no issues and feel great physically and was surprised and disappointed to learn of the positive test today,” Frittelli said in a statement distributed by the tour. “I look forward to getting back on tour once it's safe to do so."

After conducting contact tracing, the tour said its medical advisors are not recommending additional testing at this time.

Four players and two caddies have tested positive for the coronavirus since the tour returned to competition three weeks ago with tournaments in Fort Worth, Texas; Hilton Head Island, South Carolina; and Connecticut.

Nick Watney received a positive test before his second round at Hilton Head, while Cameron Champ tested positive before the Travelers Championship and Denny McCarthy after his first round at the TPC River Highlands.

In addition, caddies for Graeme McDowell and Brooks Koepka tested positive. That led to the withdrawals of McDowell, Koepka and Chase Koepka, the younger brother of the four-time major champion. Bud Cauley also withdrew after playing the opening round with McCarthy, all to be safe.