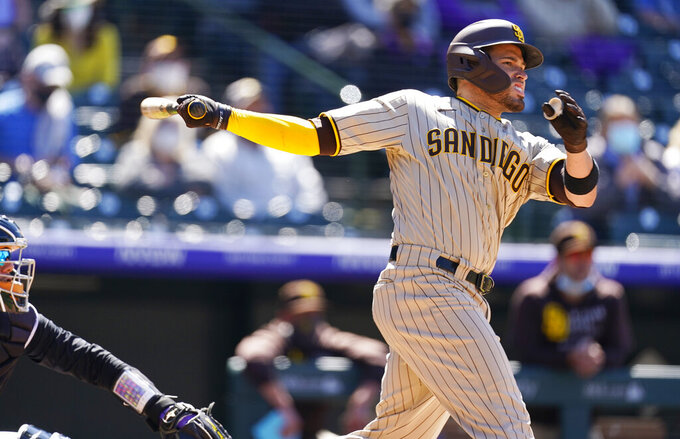 San Diego Padres' Victor Caratini follows the flight of his grand slam off Colorado Rockies relief pitcher Robert Stephenson in the sixth inning of game one of a baseball doubleheader Wednesday, May 12, 2021, in Denver. (AP Photo/David Zalubowski)

DENVER (AP) — The San Diego Padres trudged off the field as Josh Fuentes lost his shirt in a wild celebration near second base following Colorado's walk-off win Wednesday night.

A sense of disappointed, San Diego manager Jayce Tingler conceded. Still, a lesson in perseverance, too, after the Padres took two of three in the series despite missing key players due to coronavirus protocols.

Fuentes capped his big game with a game-winning, two-out single in the eighth inning after earlier hitting a two-run homer and the Rockies salvaged a doubleheader split by beating the virus-hampered Padres 3-2.

To Tingler, this was a prime example of how the shorthanded Padres need everyone to chip in.

The Padres, missing starters Fernando Tatis Jr., Eric Hosmer, Wil Myers and two others because of COVID-19 concerns, won the opener 5-3. Austin Nola, who's normally a catcher but was playing second base for shorthanded San Diego, made a nifty catch with the bases loaded for the final out.

“That’s what it’s going to take to get through with five guys down," Tingler said.

In the nightcap, Fuentes drove a changeup from reliever Nick Ramirez (0-1) to deep center to set off a wild celebration near second base — water was dumped on Fuentes and then he ripped off his uniform top — as the Rockies snapped a five-game skid. Fuentes' bat provided all the run production — he homered in the second.

For his breakout at the plate, Fuentes credits his new haircut and a pep talk from manager Bud Black. The takeaway in their talk: Don't be so hard on himself.

“It feels really good knowing I came up with a plan and had an approach and to get rewarded, said Fuentes, whose cousin is Nolan Arenado.

The Padres were haunted by a series of late-inning baserunning mistakes.

In the eighth, Jake Cronenworth started on second under the extra-inning rule. After advancing to third, he tried to score on Nola's grounder, but was thrown out at the plate. The Padres challenged thinking there was no sliding lane. The out call was upheld.

This after pinch-hitter Victor Caratini, who hit a grand slam in Game 1, continued his productive day by chopping a game-tying single through a drawn-in infield in the seventh. The Padres were poised for more, only to run themselves out of the inning with one out and runners on first and second.

Caratini was thrown out at third by left fielder Raimel Tapia on a blooper he thought was going to be caught. Then, Trent Grisham was caught trying to steal third.

“We preach aggressiveness," Tingler said. “We’re going to learn from those mistakes and move forward.”

San Diego managed seven hits with a lineup missing several big bats, with Tatis and Myers both testing positive for the virus.

Before the game, Myers was placed on the injured list along with Hosmer, who’s sidelined as part of baseball’s contact tracing health and safety protocols.

Tatis, their standout shortstop, went on the IL on Tuesday after testing positive. Jurickson Profar and Jorge Mateo also were added because of contact tracing.

“It’s one of those opportunities — an opportunity for us to come closer and build even better chemistry,” Tingler said.

Padres starter Blake Snell was lifted for a pinch-hitter after throwing four innings and allowing two runs. He struck out seven and walked three.

The 2018 AL Cy Young Award winner hasn’t lasted more than 5 1/3 innings in any of his eight starts for the Padres since being acquired from Tampa Bay.

“I'm obviously trying to get it back to the guy that I know I am,” Snell said.

Austin Gomber took a hard no-decision. Acquired in an offseason trade for Arenado, Gomber allowed one unearned run over 5 1/3 innings.

In the first game, Caratini lined a two-out grand slam in the sixth to put the Padres. It came on a belt-high fastball from reliever Robert Stephenson, who was summoned after starter Jon Gray (4-3) loaded the bases.

Emilio Pagán (3-0) picked up the win with a scoreless fifth inning. Mark Melancon earned the five-out save, his 12th, by getting Elias Diaz — on the 10th pitch of the at-bat — to pop out to Nola, who made the play with two other fielders converging.

Nola was a shortstop in the minor leagues but hasn’t played the infield regularly since 2019. He pinch hit for starter Yu Darvish in the fifth and closed out the game at second base.

Fuentes’ two-run homer ended a string of six straight homerless games for Colorado. It was the team's longest stretch without a homer since a drought of seven games in 2014.

Fuentes thought a reason he was pressing had a little to do with the last series in St. Louis. He wanted to impress Arenado.

“You can definitely say Nolan got me too fired up,” Fuentes cracked.

Padres: Off Thursday before starting a nine-game homestand that includes three games each against St. Louis, Colorado and Seattle.

Rockies: Open a four-game series with Cincinnati on Thursday.