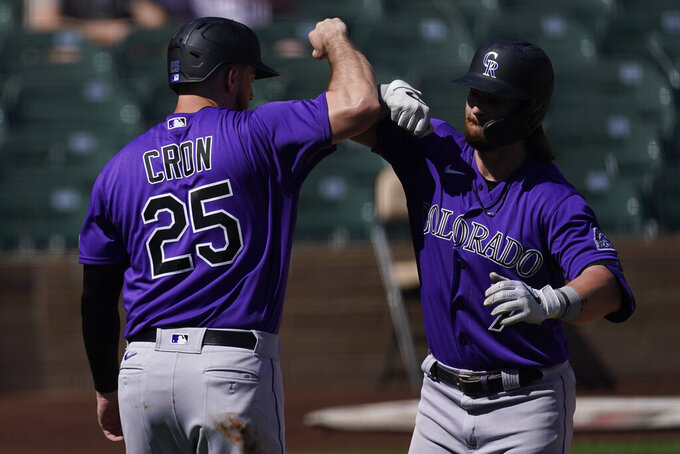 Colorado Rockies' Brendan Rodgers, right, celebrates with C.J. Chron (25) after they both scored off of a home run hit by Rodgers during the first inning of a spring training baseball game against the Arizona Diamondbacks Tuesday, March 9, 2021, in Scottsdale, Ariz. (AP Photo/Ashley Landis)

SCOTTSDALE, Ariz. (AP) — Joey Gallo's spent several spring trainings in Arizona so the Texas Rangers slugger knows the difference between a real homer and the cheap high fly balls that can drift out of the park in the forgiving desert air.

The 27-year-old says his power surge through the first two weeks of exhibition games is for real.

“It’s a different environment, it’s a different field,” Gallo said. “But for me, look, I know I have power. I know the balls that I’ve hit so far this spring would probably go out of Globe Life Field anyway.”

Gallo has hit an MLB-high five homers through his first seven games, giving the Rangers hope that he can bounce back from a tough 2020 season. The 6-foot-5, 250-pounder has always had an all-or-nothing approach that often ends in a homer, walk or a strikeout.

But in last year's pandemic-shortened season, it was a lot more “nothing” than “all."

He finished with a .181 batting average and 10 homers which is one of many reasons the Rangers finished last in the AL West with a 22-38 record.

Gallo's hoping to return to his 2019 All-Star form when he had a career-high .253 batting average and .389 on-base percentage.

He's pleased with his start but also understands it only matters if it carries over into April.

“I wish these counted,” Gallo said. “That would be awesome, but they don’t.”

Here are a few other players who were impressive during the first two weeks of exhibition action.

1B Matt Olson, Athletics: The Athletics slugger is much like Gallo in trying to bounce back from an uneven 2020 when he hit just .195, though he did have a team-high 14 homers. He's had a good start with seven hits in his first 14 at-bats, including three homers and three doubles.

LHP Madison Bumgarner, Diamondbacks: The four-time All-Star had an encouraging first outing, striking out six batters over two innings while giving up one hit. The 31-year-old signed an $85 million, five-year deal with D-backs before last season but struggled in 2020 when he finished with a 1-4 record and a 6.48 ERA. Also encouraging: His fastball velocity was back in the 90-91 mph range after sitting in the high 80s for much of last year.

2B/SS/3B Nico Hoerner, Cubs: The versatile Hoerner can play just about anywhere and is looking like he might be ready to take a step forward offensively. Chicago's 2018 first-round pick out of Stanford has nine hits in his first 13 at-bats, including three doubles and a homer. He could potentially be the team's starting second baseman on opening day.

LHP Robbie Ray, Blue Jays: The 2017 All-Star had a tough time with his control last season — walking 45 batters in 51 2/3 innings — and was dealt at the trade deadline from Arizona to Toronto. He's shown dominant stuff at different points throughout his career and struck out a career-high 235 batters in 2019. He's looked closer to that version through two starts, striking out eight batters in 4 1/3 innings

2B Brendan Rodgers, Rockies: The third overall draft pick in 2015 has seven hits in his first 18 at-bats, including two homers, and looks like he might be able to seize the starting job at second base. The 24-year-old has been a top prospect for several years and hit .350 with nine homers in 2019 at Triple-A Albuquerque.

RHP Lance Lynn, White Sox: Chicago added the 33-year-old in an offseason trade and his first two starts have been solid. He's given up no runs over 4 2/3 innings while striking out eight. The durable right-hander pitched an MLB-high 84 innings for the Rangers last season and had a 6-3 record with a 3.32 ERA.