Game On: NHL restart a small step toward return to normalcy 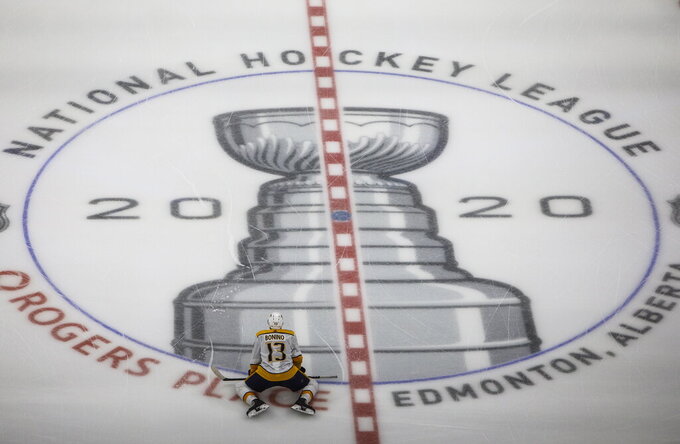 TORONTO (AP) — NHL Commissioner Gary Bettman took a short break from watching the final few exhibition games Thursday to ponder the significance of awarding the Stanley Cup some two months from now — should all go as planned.

The magnitude of the task it took to simply reach the cusp of resuming play following a four-and-a-half month pause certainly suggests this year’s celebration has the potential of being a shared experience.

“If you look at the NHL family as a whole, starting with our fans, our players, our people at the league office and our club, the focus, the determination, the desire and the effort — assuming we're able to get to that goal — will have been the ultimate collaboration,” he added. “I believe whoever ultimately hoists the Stanley Cup will deserve it in ways we couldn’t have imagined, and probably still can’t.”

The first step towards closing the NHL’s most unique season begins Saturday, with the start of the expanded 24-team playoffs in Toronto and Edmonton, Alberta.

A nine-day slate of a potentially 52 games -- depending on the results of the eight best-of-five series -- will begin with the Carolina Hurricanes facing the New York Rangers at noon (Eastern) in Toronto. The top four teams in each conference, meanwhile, will play a round-robin series to determine seeding for the first round to begin Aug. 11.

Rust will certainly play a factor, given how the exhibition games over the past three days featured a mix of sloppy and surreal.

The crispness might take some time to develop after months with no action, and the ice conditions will need to be monitored in the summer heat — even in empty arenas — with as many as three games a day.

With players eager to hit opponents after weeks of practices and scrimmages, New York rivals Johnny Boychuk and Brendan Lemieux dropped the gloves for an old-time hockey tussle.

So much for self-isolation.

Keep in mind, too, what might spill over with teams quarantining in a “bubble” in the same hotels — though staying on separate floors.

“I’m sure there’ll be a lot of head down, walk right by, maybe just give a quick nod if you run into somebody,” he added, before breaking into a laugh. “I’m sure it’ll be civil but strange, although you never know.”

Little seems normal in the age of COVID-19.

Not the mostly empty streets of downtown Toronto, where the hustle and bustle of the business-suited crowd and tourists is down to a trickle.

The entrances of the Royal York Hotel, where some teams are staying, were completely fenced off and covered in black tarp featuring NHL and NHL playoff logo, with a notable security presence at each entry point.

Though hockey was being played inside Toronto’s Scotiabank Arena, there was no hint of it outside the building.

Maple Leaf Square, usually packed with throngs of fans, was instead fenced off, and the benches used by a handful of NHL and arena staff enjoying a late lunch.

Even the Hockey Hall of Fame was essentially empty. It’s averaging about 100 visitors a day since it opened two weeks ago, as opposed to the usual 1,000.

“This is steady by comparison to a month ago,” an employee at the Hall of Fame’s gift store cracked, pointing to the two customers inside.

For Maple Leafs and Oilers players, there’s no such thing as home-ice advantage. They’ll be getting changed in the visitors’ locker room when called for and certainly won’t be sleeping in their own beds.

“I think the reality definitely set in yesterday,” Oilers goalie Mike Smith said Monday, a day after teams moved into their respective bubbles. “You bring your luggage into a hotel room after you drive to the rink 10 minutes from your house.”

In Toronto, the city in early August would be buzzing if not for the coronavirus.

The long-standing Caribbean Carnival two-week long street fest was supposed to open this weekend. The Toronto Blue Jays are spending their entire season south of the border. And the Canadian National Exhibition, which draws hundreds of thousands of visitors, would be gearing up to open in a few weeks.

Chosen as one the NHL's two hubs is a point of pride for Toronto Mayor John Tory, even if it means fans can’t attend.

“We consider ourselves over others — like it or not — to be the hockey capital of the world, and so this kind of reinforces that,” Tory said. And he doesn’t mind Edmonton being chosen to host the conference finals and Stanley Cup Final, even if it means the Maple Leafs win their first championship since 1967 in Alberta.

Tory has already made initial plans for the Cup celebration.

“If it needs to be a one-car parade with no spectators on Bay Street, we will have such a parade,” Tory said. “So long as the one car has the Stanley Cup in it, I won’t care beyond that.”

Philadelphia Flyers coach Alain Vigneault hopes the return of hockey can represent one small step in a return to normalcy.

Vigneault has good reason to hope after spending part of the NHL break in his native Quebec. His first stop was visiting his parents at a senior care residence, where his 87-year-old mother is battling dementia.

Both came out on their second-floor balcony, from where he enjoyed a brief chat.

“It was a cold day in May, but it was a good day for my mom. She recognized me,” Vigneault said. “This moment was no doubt the highlight of my quarantine.”