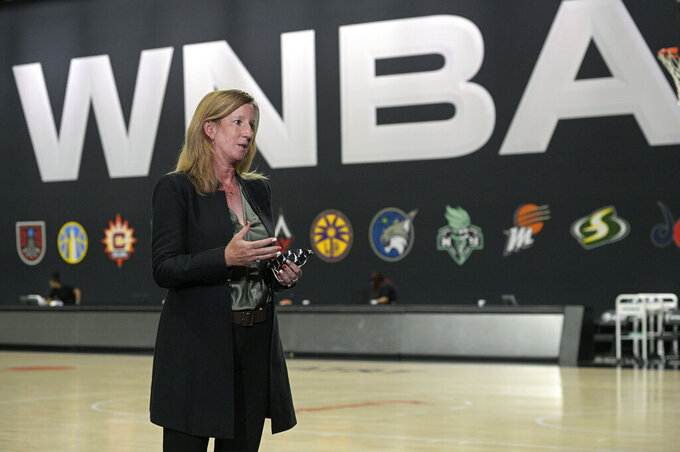 The Seattle Storm and Minnesota Lynx prepared to take the court Tuesday night, two days after Game 1 of their WNBA playoff semifinal was postponed because of inconclusive COVID-19 tests.

WNBA Commissioner Cathy Engelbert said three players on the Storm had inconclusive results Sunday from tests they took the day before, so the league decided to postpone the scheduled opener of the best-of-five playoff series.

“The health and safety of all players and staff continue to be our top priority. After comprehensive consultation with health and safety specialists following the additional testing of Seattle’s players and staff as well as the implementation of contact tracing, we feel confident in moving forward with the Storm and Lynx taking the court for Game 1 of their semifinals series,” Engelbert said. “We are closely monitoring the situation and are coordinating with medical specialists.”

The Storm players underwent additional testing and all three were cleared before game time.

“The balloon popped,” Seattle coach Gary Kloppenburg said about the postponement. “We were all prepared (to play) and then it all hit the fan pretty quick there. It was deflating in a way, the uncertainty of the situation. Fortunately, we got them back. We were able to get on the court today with a couple of them.”

Kloppenburg said seeing other teams go through similar situations during the regular season helped ease the concerns of his players since there had been a few inconclusive tests before. He wasn't concerned about their focus heading into the opener.

“This team has been good at putting this behind them and moving on,” he said.

The first game of the series was scheduled to tip at 9 p.m. EDT. It was originally scheduled to be the earlier game on Tuesday, but the league switched it with the other semifinal, between Las Vegas and Connecticut, to give it more time to make sure that there wasn't an infection or more exposure to the virus in the WNBA bubble.

“We were advised by the infectious disease specialists to make that decision,” Engelbert said. “Every day is a new day in COVID world. This was not made to clear a specific player."

The league said all players and staff remaining in the playoffs will continue being tested under its health and safety protocols.

“I am confident the league isn’t going to take any chances when it comes to our safety,” Lynx star Napheesa Collier said. “I know whoever takes the court tonight is 100 percent cleared.”

The WNBA made it through the regular season with a few false positive tests for the coronavirus, but no players developed COVID-19 once the season started. While those players had to miss a game, no contests were canceled until Sunday's because of coronavirus fears.

“We are constantly monitoring it,” Engelbert said. “With all the challenges we had this year, the virus is one that every day gets reset to zero.”

The season is being played inside a bubble environment at IMG Academy in Bradenton, Florida.

Seattle, which finished 18-4, received a double bye to the semifinals and hadn't played since getting routed by Las Vegas on the final day of the regular season. The Storm have won six straight against Minnesota, including both regular-season meetings this year.