Garrett jumped at chance to be Giants' offensive coordinator 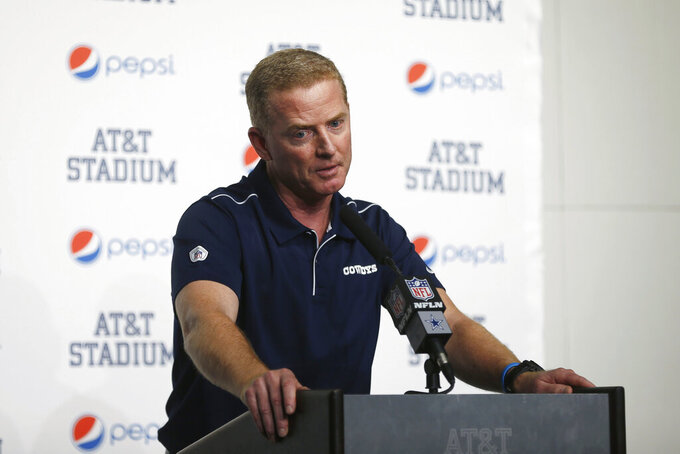 FILE - In this Dec. 15, 2019, file photo, then-Dallas Cowboys head coach Jason Garrett takes part in a news conference following an NFL football game against the Washington Redskins in Arlington, Texas. Jason Garrett wasn’t interested in sitting around for a year after the Dallas Cowboys didn’t renew his contract as their head coach. So when the New York Giants and new head coach Joe Judge called to ask him about becoming the offensive coordinator, he jumped at the opportunity. Speaking to the media Tuesday for the first time since he was hired, Garrett refused to discuss his final days in Dallas, where he was the head coach for a decade. (AP Photo/Ron Jenkins, File)

Jason Garrett wasn't interested in sitting around for a year after the Dallas Cowboys didn't renew his contract as their head coach after 10 years in charge.

So when the New York Giants and new head coach Joe Judge called to ask him about becoming the offensive coordinator, he jumped at the chance

Speaking to reporters on Tuesday for the first time since he was hired in January, Garrett refused to discuss his final days in Dallas. He thanked the Cowboys organization and players for his time there, but wanted to focus on the Giants and his return to the area.

“I love coaching football," Garrett said on a virtual conference call Tuesday. “I was just so fortunate to have been able to play football in the National Football League for 15 years and now I have been coaching since then. I love the game. I love every part of it about the game as a player, as a coach.”

Garrett said the opportunity to return to the Giants and the area was too good for him and his wife to pass up.

Garrett grew up in New Jersey, played football at Princeton and spent four seasons with the Giants, primarily as Kerry Collins' backup from 2000-2003.

The 54-year-old steered clear when asked about whether he was helping Judge in his first season as a head coach. Garrett said he was learning and contributing to the team in any way he could.

There has been speculation the Giants' offense would look very much like the one the Cowboys ran in his tenure.

While there probably will be some similarities. Garrett said his focus is learning about his players.

Garrett said the common theme in his offenses is the desire to attack defenses in different ways while executing at a high level.

The hard part is in a season restricted by COVID-19 is the lack of minicamps, limited team time and a lot of virtual learning. That has forced Garrett to watch a ton of NFL and college videotapes to get an understanding of players.

One of the big jobs for Garrett will be developing second-year quarterback Daniel Jones, who had an excellent rookie season after being the No. 6 pick overall in the 2019 draft.

Garrett said Jones has all the tools a quarterback needs. The Duke product is a hard worker with an inquisitive mind.

“There is no question he is a football guy,” Garrett said. “”He loves football and he is always so prepared and always studying his stuff. He always has great questions and wants to get better. My experience is when you have that approach and attitude, if you have some ability, he will keep growing and getting better every day."

NOTES: Garrett, defensive coordinator Pat Graham and special teams coach Tom McGaughey all expressed their sympathy to co-owner Steve Tisch, whose 36-year-old daughter Hillary died on Monday. ... McGaughey, who recently battled cancer, said he never hesitated returning to coaching this season because of the coronavirus pandemic. ... Graham said his defenses will be tough, have team-first personnel, will hard hard, be efficient and stress fundamentals. ...The Giants are scheduled to have their first practice on Monday.