Gaza man: After lengthy torture, Hamas forced me to divorce 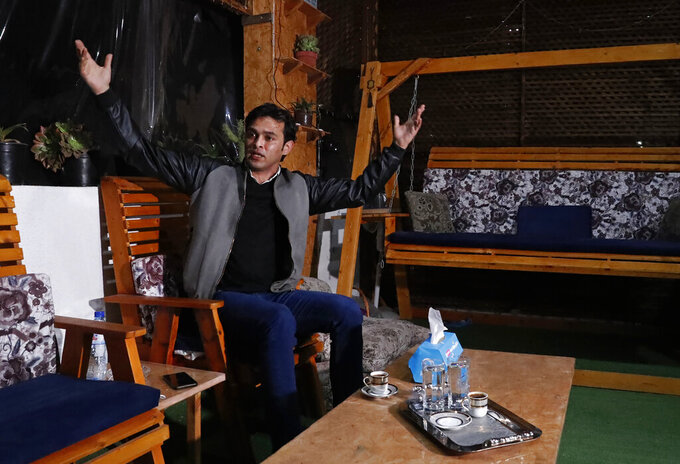 Rami Aman, a Palestinian Gazan peace activist, recalls his ordeal, during an interview on the roof of his family house in Gaza City, Feb. 10, 2021. After months of torture and interrogations in a Hamas prison, Aman says he was offered an unconventional proposition: Divorce your wife and you are free to go. Aman had recently signed a marriage contract with the daughter of a Hamas official, and the ruling Islamic militant group apparently wanted to dispel any insinuation that it supported Aman’s outreach to Israeli peace activists. (AP Photo/Adel Hana)

GAZA CITY, Gaza Strip (AP) — After months of torture and interrogations in a Hamas prison, Palestinian activist Rami Aman says he was offered an unconventional proposition: Divorce your wife and you are free to go.

Aman had recently signed a marriage contract with the daughter of a Hamas official, and the ruling Islamic militant group apparently wanted to dispel any insinuation that it supported Aman’s outreach to Israeli peace activists. He says he eventually caved into the pressure. Now he says the love of his life has been whisked out of Gaza against her will, and he may never see her again.

“I realized I was sent there to do time until I break up my relationship,” Aman said in an interview on the roof of his Gaza City home.

It was the final humiliation in a saga that began with what he believed to be an innocent online meeting with Israeli peace activists. Instead, the episode landed him in a notorious prison cell known as “the bus,” and ultimately destroyed his marriage. His experience shows the tough constraints on free expression in the Hamas-ruled territory, and the militant group’s hostility to any talk of coexistence with Israel.

“The deplorable treatment of Rami Aman by Hamas authorities reflects their systematic practice of punishing those whose speech threatens their orthodoxy,” said Omar Shakir, Israel-Palestine director at Human Rights Watch.

Aman did not think he was doing anything subversive when he joined that fateful Zoom call last April. Amid the widespread closures at the start of the coronavirus pandemic, Aman wanted to discuss the “double lockdown” in Gaza, which has endured 14 years of a tight Israeli-Egyptian blockade against Hamas.

“I wanted to let people know more how it is when you live under Israeli occupation and siege, deprived of the rights the rest of the world enjoys,” said Aman, a 39-year-old freelance writer.

For over two hours, Aman and his group of peace activists, the Gaza Youth Committee, talked about coexistence with dozens of Israelis.

As word of the meeting leaked out, social media filled with angry comments branding him a traitor. Some urged Hamas, which has ruled Gaza since 2007, to act.

Aman said that on April 9, he and seven members of his group were summoned to Internal Security, the agency that deals with dissidents and people accused of spying for Israel.

He said he was blindfolded and quickly sent to “the bus,” a room lined with rows of kindergarten chairs and a pair of toilets at the end. There, he said, detainees are forced to sit in the tiny chairs for days or weeks at a time, with few breaks.

“They did not present any evidence against me,” Aman said. He said he would sit in the chair from 6 a.m. until 1 a.m., except when he was taken away for questioning or to pray. He was only allowed to remove his blindfold when he went to the bathroom. His captors called him by his prison number, 6299.

The questions focused on the Zoom meeting and who might have been behind it. Aman was accused of collaborating with Israel -- a crime punishable by death.

The Gaza Youth Committee has held dozens of talks with Israelis, Americans and Europeans under an initiative called Skype with Your Enemy. In 2019, it organized an event with cyclists in Gaza and Israel riding in parallel on opposite sides of the barbed-wire perimeter fence.

He said at 1 a.m., the “bus riders” were allowed to sleep blindfolded next to the chairs. They would curl up in their jackets and lie on the cold floor before they were woken up a few hours later for the Muslim dawn prayer. In a 2018 report, Human Rights Watch documented similar accounts.

The interrogation was over after one week, but Aman said he spent 18 agonizing days on the bus before being moved to a tiny cell.

Then the questioning took a strange new turn.

Just two months earlier, Aman had signed a marriage contract with the daughter of an exiled Hamas official based in Egypt. The couple did not have time to celebrate their wedding with a formal ceremony due to a coronavirus lockdown, but they were considered married under Islamic law.

Aman said he met her in 2018 after she separated from her first husband. He said she believed in the message of peace and joined his team in several discussions with Israelis. He asked not to publish her name, fearing it could bring her harm.

Any insinuation that a member of Hamas was friendly toward Israel is deeply embarrassing to the group. In an unrelated and far more serious case, Mosab Yousef, a son of one of Hamas’ co-founders, spied for Israel from 1997 to 2007. Now living in the U.S., he is a staunch critic of Hamas and the subject of a 2014 documentary.

Aman said his new wife was arrested with him but they were quickly separated.

“She doesn’t want you,” an officer told him. “It’s better you both divorce.”

For two months, he said, he resisted the pressure to break up. On June 28, she finally visited, telling him she had been released on bail.

“This was not the woman I knew,” he said. “She was full of weakness and fear.” Officers sat in the room.

He asked her if she wanted to end the relationship, and she said yes. “I know she did not say so from her heart and it was clear she was under heavy pressure,” Aman said. He refused to grant her a divorce.

In July he was transferred to Hamas’ central prison, though he still had not been convicted of any crime. There was no more interrogation or torture.

On Aug. 12, an Islamic judge came for a visit and asked whether he felt coerced to divorce. Aman told him yes, and felt encouraged since Islamic law does not allow divorce to be forced on someone. But then the imam turned against him.

“How are you being forced? Do you see me carrying a gun?” he says he was told.

He said he finally gave in and signed the divorce papers after he was promised he would be released the next day.

Yet he remained in captivity for two more months. On Oct. 25, Egypt opened its border with Gaza to allow a Hamas delegation to travel to Cairo.

The next day, a Hamas court convicted Aman and two members of his team on the vague charge of “weakening the revolutionary spirit.” They were sentenced to one year in prison, but had the remainder of their terms suspended and were released.

Only then did Aman learn his wife had been taken with the Hamas delegation to Egypt and turned over to relatives living there.

The Associated Press contacted the woman, who confirmed she was forced into the divorce and wanted her husband back.

The landlord of the Gaza apartment where the woman lived confirmed that she had collected her belongings, accompanied by a Hamas official, after her release on bail. She was then taken to a women’s shelter until her move to Egypt. The Hamas official, a well-known public figure, did not answer calls seeking comment.

Aman spends his days speaking to his lawyer, human rights groups, and texting Hamas officials. Internal Security are still holding his laptop, desktop computer, and his phone along with several other devices belonging to family members.

He also has learned that he is now barred from leaving Gaza. In December, after receiving an invitation to speak at New York University, he said Hamas officers blocked him from entering Israel to apply for a visa at the U.S. consulate.

Eyad Bozum, an Interior Ministry spokesman, confirmed the travel ban but said the issue is “on its way to being resolved,” without elaborating.

For now, Aman has put aside his political activism. “Now I have my personal battle: return to my wife.”