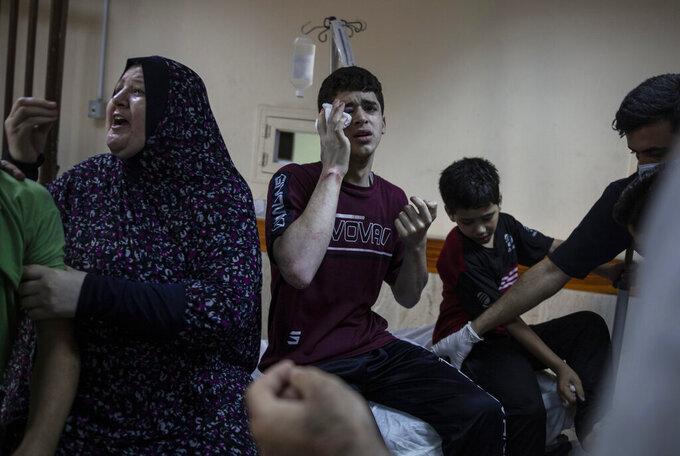 FILE - In this May 17, 2021, file photo, Palestinians receive treatment at the Shifa Hospital for their wounds caused by an Israeli airstrike airstrike that destroyed the upper floors of a commercial building and caused damage to the nearby Health Ministry and prime health care clinic, in Gaza City. The Gaza Strip's already feeble health system is being brought to its knees by the fourth war in just over a decade. (AP Photo/Khalil Hamra, File)

GAZA CITY, Gaza Strip (AP) — The Gaza Strip’s already feeble health system is being brought to its knees by the fourth war in just over a decade.

Hospitals have been overwhelmed with waves of dead and wounded from Israel’s bombardment. Many vital medicines are rapidly running out in the tiny, blockaded coastal territory, as is fuel to keep electricity going.

Two of Gaza’s most prominent doctors, including the No. 2 in Gaza’s coronavirus task force, were killed when their homes were destroyed during barrages since fighting between Hamas and Israel erupted 10 days ago.

Just as Gaza was climbing out of a second wave of coronavirus infections, its only virus testing lab was damaged by an airstrike and has been shut. Health officials fear further outbreaks among tens of thousands of displaced residents crowded into makeshift shelters after fleeing massive barrages.

At one U.N.-run school where 1,400 people were taking shelter, Nawal al-Danaf and her five children were crammed into a single classroom with five other families. Blankets draped over cords crisscrossed the room to carve out sleeping spaces.

“The school is safe from the war, but when it comes to corona, with five families in a room, everyone infects each other,” said al-Danaf, who fled Israeli tank shelling on the northern Gaza town of Beit Lahiya a few days ago.

Blankets and laundry dangled from the railings of the school’s balcony, as women looked down into a yard where children were playing and men sat chatting. No one wore a mask or could do any social distancing in the cramped quarters.

The Gaza Strip’s health infrastructure was already collapsing before this latest war, said Adnan Abu Hasna, a spokesman for UNRWA, the U.N. agency that provides vital assistance to the 75% of the enclave’s population who are refugees. “It’s frightening,” he said.

The sector has been battered by three previous wars between Israel and Gaza’s Hamas rulers.

This war began May 10 when Hamas fired long-range rockets toward Jerusalem in support of Palestinian protests against Israel’s heavy-handed policing of the Al-Aqsa Mosque compound, a flashpoint site sacred to Jews and Muslims, and the threatened eviction of dozens of Palestinian families by Jewish settlers.

Since then, Israel has struck hundreds of targets across the Mediterranean coastal strip, and Hamas has fired thousands rockets at Israel. Israel says it seeks to cripple Hamas by targeting its leaders, and military infrastructure, while trying to avoid civilian casualties. But the powerful bombs dropped on crowded Gaza have caused significant damage to the territory's infrastructure.

During each of the wars, hospitals and clinics were damaged or destroyed, and medical personnel killed. And after each, authorities had to slowly rebuild, hampered by the blockade imposed by Israel and Egypt since Hamas took power in 2007.

Other turmoil also weighed on the system. More than two years of weekly Friday Palestinian protests at the border with Israel against the blockade produced a constant stream of casualties from Israeli fire — more than 35,000 injured, many with lifelong disabilities and around 100 still awaiting reconstructive surgery and amputations.

Now health facilities are struggling to handle both the casualties of war and the everyday needs of Gaza’s 2 million people.

"It’s layer-upon-layer of crisis. And there never is really enough time between each crisis to rebuild," said Matthias Schmale, the UNRWA director in Gaza. "The (health care) system has gradually been quite significantly weakened. I wouldn’t say it’s on its knees, but getting close."

The bombardment has driven more than 56,000 Gazans from their homes, fleeing into 59 schools run by UNRWA. The U.N. agency is providing them with water and basic hygiene supplies, including face masks. Unknown numbers more have taken refuge with relatives.

UNRWA learned from the last war, in 2014, when some 292,000 displaced people crammed into its schools and other shelters during 50 days of fighting. Since then, the agency has installed showers, more bathrooms and extra water and electricity capacity into some of the schools in case they might be needed again for shelters, officials said.

So far, the current onslaught has not been as directly destructive to health facilities as 2014, when multiple hospitals and clinics took direct hits from Israeli bombing, as did U.N. schools housing the displaced.

Still, Israeli attacks this time have damaged at least 18 hospitals and clinics, the World Health Organization said. Nearly half of all essential drugs have run out. Schmale said at least three health care centers have been leveled, including a trauma and burn center run by Doctors Without Borders.

Among the sites damaged was the main health care clinic, the only site in Gaza where tests detecting COVID-19 can be analyzed, said Dr. Majdi Dhair, head of preventive medicine at the Health Ministry. As a result, coronavirus testing has halted.

“It’s like a ticking bomb because people are not tested, and those who are infected won’t know that they are infected,” Dhair said.

As of Monday, when the clinic was damaged, Gaza had recorded more than 105,000 coronavirus infections, including 986 deaths. Some 80 people were in critical condition with the virus.

Just under 39,000 people, or 2% of Gaza's population, have received vaccinations. There are only enough doses to vaccinate another 15,000, and those expire in June, raising fears they will be unusable by the time they can be given.

“In a war, there are responsibilities to protect health institutions and health care workers,” Schmale said.

He said this week a senior lab technician who works at a main UNRWA health clinic was seriously wounded in an airstrike as he rushed home to help his wife evacuate. He is in intensive care with severe brain damage.

"The price the civilian population is paying is unbearable and unacceptable, and health care workers are an element of that," Schmale said.

"Our staff are as terrified as the rest of the population. They are really afraid to go to work after heavy nights of shelling or bombing."

Only about half of government-run primary care centers are operating. Sixteen of UNRWA’s 22 health care centers were working as of Wednesday. Most of Gaza relies on the U.N. centers, according to UNRWA.

All of the government’s 13 hospitals are running, though some have sustained damage, and as of Monday, 16 private or NGO-run hospitals were working.

But all are badly in need of emergency medical supplies. WHO listed some 40 key medicines and medical supplies that it is waiting for, including anesthetics, antibiotics, sutures and blood bags. Gaza’s border with Israel has been closed throughout the fighting.

During one brief opening, UNRWA was able to bring in five fuel trucks, enough to help it run its facilities for a few weeks. But other trucks of food and medicine could not enter, reportedly prevented by ongoing shelling. Two days ago, Egypt sent in a supply convoy that included medical supplies and fuel, but that fuel is expected to run out Thursday.

If the border stays closed, supplies will begin to run out and “we will need so-called humanitarian corridors open to bring stuff in,” Schmale said.