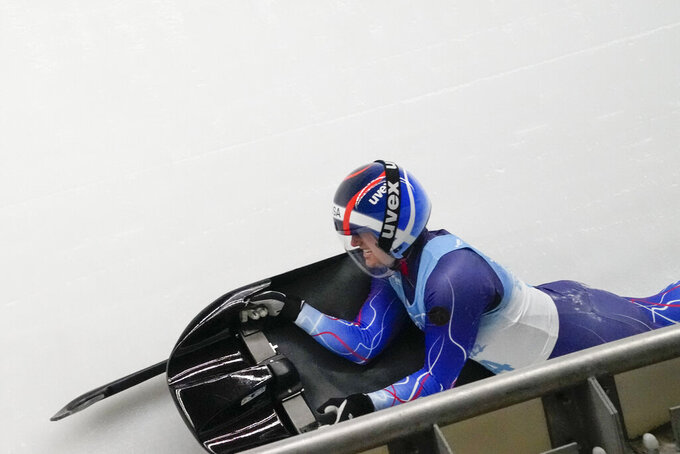 Emily Sweeney, of the United States, crashes during the luge women's singles run 2 at the 2022 Winter Olympics, Monday, Feb. 7, 2022, in the Yanqing district of Beijing. (AP Photo/Dmitri Lovetsky)

BEIJING (AP) — Natalie Geisenberger has been here twice before, holding the lead midway through the Olympic women’s luge race.

Both times, she won gold.

She’s not celebrating this time quite yet.

As many other medal hopefuls — including the two USA Luge Olympic veterans — slipped, skidded and crashed their way out of contention, the German sliding star found a way to be better than anyone else through two runs at the Beijing Games. Geisenberger ended Monday night with a combined time of 1 minute, 56.825 seconds, about two-tenths of a second ahead of teammate Anna Berreiter and more than a half-second up on Tatyana Ivanova of the Russian Olympic Committee.

“I’m happy that half of the race is over,” Geisenberger said. “But the second half is not over.”

She is understandably leery, knowing one mistake is all it would take to derail her bid to become the first three-time women’s singles gold medalist in Olympic history.

Then again, history is also on her side: In each of the last five Olympic women's luge races, the 1-2-3 order at the midway point ended up as the gold, silver and bronze order when the competition was complete.

“I may not sleep that well tonight," Geisenberger said.

Many of the best in the world were no match for the Yanqing Sliding Center on this night. Julia Taubitz and Madeleine Egle were, by far, the best in the women’s luge world all season. They won almost every race, finished in the top two spots of the World Cup standings and were supposed to be the ones who ended Geisenberger’s Olympic reign.

Nope. Egle slipped in the first run and is 1.010 seconds — forever in luge — behind Geisenberger, only in seventh place. Taubitz, the first-run leader, crashed in her second run and slipped all the way to 14th place.

Berreiter took advantage, joining Geisenberger in the very small club of sliders who had no big mistakes.

“I want to have two consistent runs tomorrow again, and hopefully, I’ll be satisfied with my result,” Berreiter said.

The Americans had a rough night. Ashley Farquharson is 18th at the midway point of her Olympic debut. Summer Britcher, racing with a broken finger, crashed in her first run to doom her chances; she’s now 26th.

“I’m a little sad, but I’m OK and I’m also happy because I’m here,” Britcher said. “I’m competing at the Olympics. The one thing, when I decided to commit to another four years, I decided somewhere along the way that whatever the outcome — win, lose, crash, track record, mistakes — I wanted to come away feeling joyful for having competed at this level and joyful for the experience.”

Emily Sweeney, who was 10th after the first heat, crashed in her second run and is 28th. She broke her neck and back in a crash at the Pyeongchang Olympics four years ago. This crash was nowhere near as severe, but left her hurting nonetheless.

Like many, she had trouble toward the bottom of the track in Turn 13, truly an unlucky number so far in this competition.

“If you’re not correct coming out, the track dips away and you’re weightless a little bit,” Sweeney said, her eyes welling with tears. “So, if you’re crooked a little bit in your sled or you’re not in a great spot, it’ll get you.”