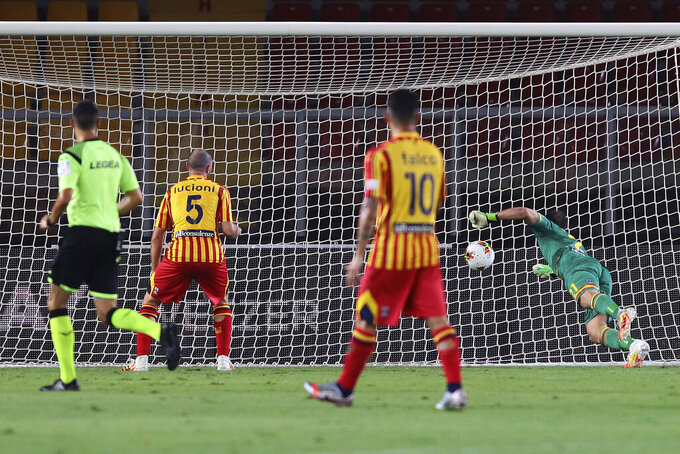 Lecce's Fabio Lucioni (5) watches the ball go in after an own-goal during a serie A soccer match between Lecce and Parma, at the Via Del Mare stadium in Lecce, Italy, Sunday, Aug. 2, 2020. (Donato Fasano/Lapresse via AP)

ROME (AP) — Genoa secured safety on the final day of the longest-ever Serie A season, while Lecce dropped down to the second division on Sunday.

Genoa beat Hellas Verona 3-0 to finish four points ahead of Lecce and ensure a 14th consecutive season in the top Italian league. Lecce lost 4-3 to Parma,

Brescia and Spal had already been mathematically relegated.

The coronavirus-delayed season ended almost 12 months after it started on Aug. 24, 2019.

At the start of the lockdown in March, Italy was the epicenter of the pandemic in Europe and has now registered more than 35,000 deaths from COVID-19.

“During those weeks we really thought that the season should be stopped,” Spadafora said. “But thanks to the series of precautions we took and the seriousness of the protocols put in place by the Italian soccer federation, the season was not only able to restart but also be completed.”

Due to the virus, the season was suspended for more than three months between March and June.

Antonio Sanabria scored twice for Genoa, which also got a goal from Cristian Romero.

Still, it was a nervous finish with Genoa losing two players to red cards and ending with nine men to Verona's 10.

Lecce, which needed to win and hope that Genoa didn’t, fought back from two goals down to equalize by halftime. But then Andreas Cornelius and Roberto Inglese restored Parma’s two-goal lead before Gianluca Lapadula pulled one back for Lecce.