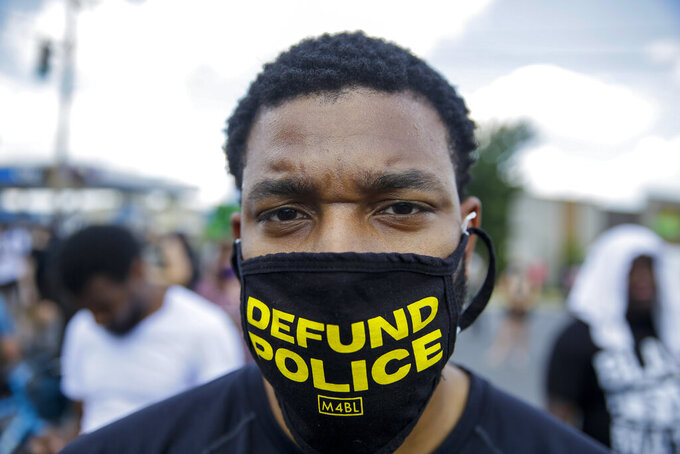 Arthur Williams, 31, of Atlanta protests on Saturday, June 13, 2020, near the Wendy's restaurant, in Atlanta, where Rayshard Brooks was fatally shot by police late Friday during a struggle following a field sobriety test. Authorities said the slain man had grabbed an officer's Taser, but was running away when he was shot. (AP Photo/Brynn Anderson)

The measure is a response to arguments by protesters nationwide that minority communities are suffering from overpolicing and that governments should spend less on law enforcement and more on social service workers who could help address problems, but without guns and arrest powers.

House Bill 286 says cities and counties can't cut spending on their police departments by more than 5% a year. The House Governmental Affairs General Government Subcommittee on Tuesday approved it on a split voice vote, sending it forward to the full committee for more debate.

“We all recognize that supporting law enforcement is of the utmost importance, and in my opinion, the most important role that our local governments have,” said the bill's Republican sponsor, Rep. Houston Gaines of Athens.

Similar bills have been offered in Arizona, Iowa, North Carolina and Florida, among other states. Lawmakers in Indiana voted such a bill down Monday.

Defunding the police was debated extensively across the country, including during the presidential race, but not much action followed. An Associated Press review found that while some local governments trimmed police budgets, cuts were mostly modest. They were driven as much by shrinking government revenue related to the coronavirus pandemic as from the calls to rethink public safety. In Minneapolis, despite efforts to transform policing, the city is planning to spend $6.4 million to try to fill vacancies.

Leaders in Gaines' hometown debated a 50% cut in police funding over the summer before rejecting it. Athens-Clarke County Commissioner Tim Denson co-authored the plan calling for the 10-year-shift toward mental health, housing and medical funding, saying he wants to create “a more holistic public safety department.”

Denson, like many advocates of change, rejects the “defund the police” label. He and other commissioners in the consolidated city-county say they were motivated by local police shootings involving mentally ill people, even before George Floyd's death at the hands of Minneapolis police.

“A lot of these things were dealing with mental health crises, with our police put into situations they really shouldn't have been,” Denson said.

Gaines, though, suggests that like Minneapolis, Athens needs to be spending more on policing to fill vacancies on its force. His proposal is supported by the Police Benevolent Association, the largest police group in Georgia.

“We believe this bill is a strong statement of support for our law enforcement officers and the citizens they protect across the state and will help ensure our local governments don’t defund our police service,” the association said in a statement Gaines read during the hearing.

In a nod to local concerns, Gaines says cities and counties can cut more than 5% if local revenues decline by more than that, and says that cities and counties with fewer than 10 officers are exempt. He also included a provision to allow governments to make larger capital expenditures for a year and not get locked in to higher levels of spending. Cities could also abolish their police forces and contract with counties for law enforcement if they guarantee equivalent levels of protection.

Georgia cities and counties oppose the bill, though, saying state lawmakers shouldn’t be wading into local decisions on how much to spend on governmental services.

“I think the bottom line is that our members feel like the decision-making on municipal budgets should be left to the elected officials in each community,” said Tom Gehl, a lobbyist for the Georgia Municipal Association.