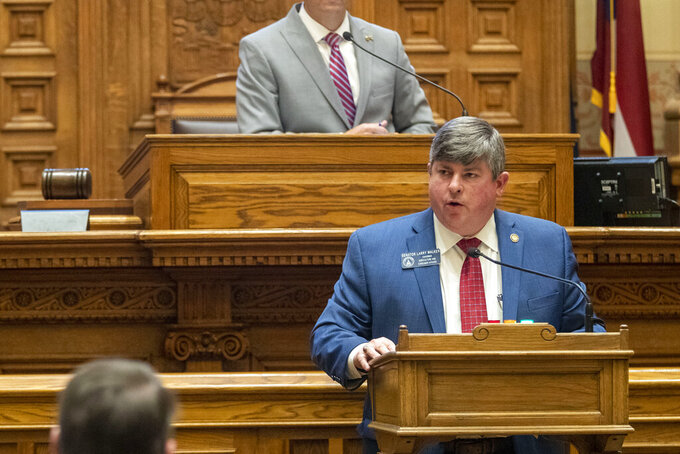 Sen. Larry Walker, Chairman of the Agriculture and Consumer Affairs committee, speaks on behalf of SB 67 in the Senate Chambers during the legislative session at the Georgia State Capitol building in Atlanta, Tuesday, Feb. 23, 2021. (Alyssa Pointer /Atlanta Journal-Constitution via AP)

ATLANTA (AP) — A $140 million state income tax cut is on its way to Gov. Brian Kemp's desk after passing the state Senate on Thursday.

Senators voted 35-15 to pass House Bill 593, which would raise the amount of money that someone could earn before starting to pay state income taxes.

Mallory Blount, a spokesperson for the Republican governor, said he would evaluate the bill before deciding whether to sign it. Previously, Kemp and Republican House Speaker David Ralston had expressed concern the tax cut could threaten federal funds. However, a U.S. Treasury spokesperson now says it will not.

“House Bill 593 is a tax cut for hard working Georgians” said Sen. Larry Walker, a Perry Republican. “The larger government gets and the more tax we pay, the less liberty and individual freedom we have.”

Kemp, Ralston and Republican Attorney General Chris Carr had attacked a provision in the recently signed federal pandemic relief law that prohibits states from using $4.7 billion in federal aid “to either directly or indirectly” offset a reduction in tax revenue through 2024. A treasury spokesperson told The Associated Press on Wednesday that the provision isn’t meant as a blanket prohibition on tax cuts; states just can’t use the relief funds to pay for them.

“This is not going to cost the state money from the feds,” Walker said.

Democrats still opposed the bill, saying that the amounts were so small that many people won't notice the tax cut, while the money could be used to offset unfunded needs in state government, such as community living services for intellectually disabled adults.

Democrats also argued that it would be better to create a state earned income tax credit that would be better targeted at the working poor and provide them a significant cash boost, instead of spreading out a small amount of cash to richer people.

“Oh great, I get 60 bucks," said Sen. Elena Parent, an Atlanta Democrat. "A lot of people aren’t going to notice that at all.”

The sharp partisan divide contrasted with the House, where the measure passed unanimously.

“People constantly ask me not to raise their taxes, instead to lower their taxes, let them have their money back," said Senate Majority Whip Steve Gooch, a Dahlonega Republican. "They can make decisions how best to raise their families, keep more of their hard-earned dollars.”

The tax cut would take effect on Jan. 1 of next year.

Before the pandemic scrambled state revenues last year, Republicans were eyeing a larger tax cut, a second reduction in the state’s top income tax rate. Legislators cut the top income tax rate from 6% to 5.75% in 2019. Republicans envisioned an additional quarter-percentage decrease to 5.5%. Analysts estimate the state would forgo $500 million to $550 million in revenue from another cut.