German brewery pairs with bakers to use surplus beer 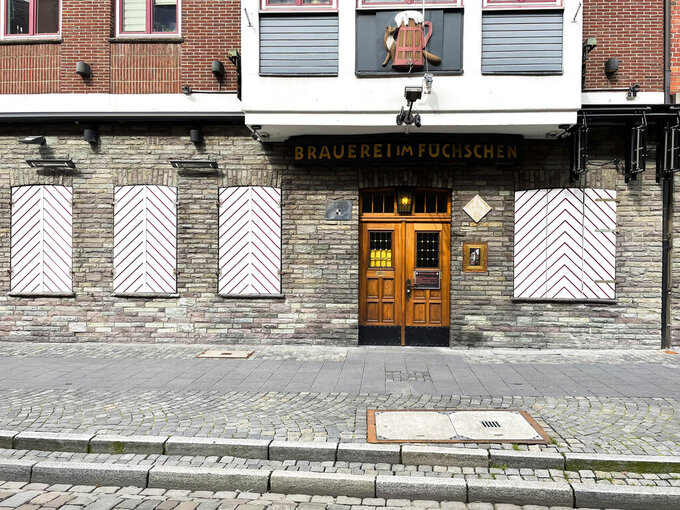 The restaurant of the Fuechschen brewery is closed in Duesseldorf, Germany, Tuesday, March 23, 2021, where about 6,000 litres of its renowned copper-colored 'Altbier' remain unsold and nearing its expiry date. The brewery now works with craft bakers who use the beer to make bread, with about twelve bakeries producing the grain bread and are giving the additional bonus of a bottle of Fuechschen's Altbier free of charge with every loaf.(AP Photo/Daniel Niemann)

DUESSELDORF, Germany (AP) — With restaurants and bars all closed due to pandemic restrictions, a Duesseldorf brewery found itself with 6,000 liters (1,585 gallons) of its copper-colored “Altbier” unsold and nearing its expiry date.

“It would have been such a shame to just toss out such a tasty beer,” said Peter Koenig, whose family has run the brewery since 1908.

“Then we came up with this idea to bake the bread with the beer, to leave out the water,” he said Tuesday. “I think it's great that these two craft industries have come together like this.”

About a dozen bakeries have been producing the Treberbrot since the start of the week, giving the added bonus of a bottle of Fuechschen's Altbier, a regional specialty, for free with each loaf.

She said that word of the bread, which her bakery sells for 3.95 euros ($4.65) a loaf including the bottle of Altbier, has spread rapidly.

“We've had queries from all across Germany if we can send it by mail, which we gladly do,” she said.

Customer Michael Maassen dropped by on Tuesday to pick up a loaf for himself — and the bottle of Altbier — after hearing about the promotion from social media.

“It's a great campaign, solidarity with one another is more important now than it ever has been," said the 48-year-old soldier.

Beer sales in Germany have been hurt by lockdown measures that have kept restaurants and bars shut since the beginning of November, except for takeouts.

That's a problem particularly for Germany's many small brewers, like Fuechschen, which often rely heavily on selling draft beer that they can't shift at the moment.