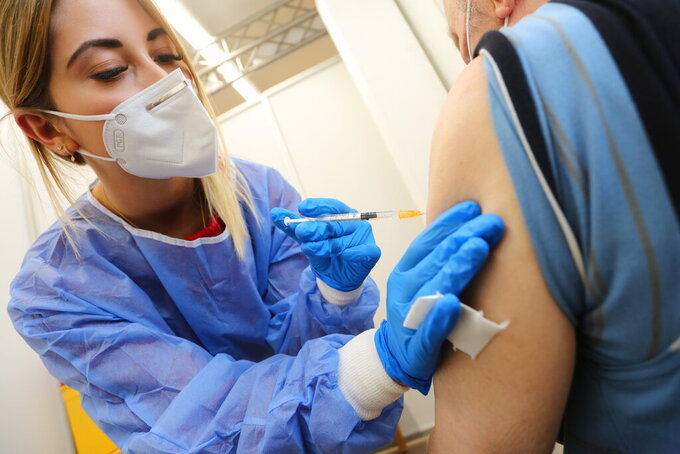 Geriatric nurse Jasmin Lasse vaccinates in the vaccination centre in Quedlinburg, Germany, Thursday, May 13, 2021. Germany's coronavirus infection rate dropped to its lowest level in nearly two months on Friday, while the health minister said the country had the most successful day yet of its vaccination campaign this week. (Matthias Bein/dpa via AP)

BERLIN (AP) — Germany's coronavirus infection rate dropped to its lowest level in nearly two months on Friday, while the health minister said the country had the most successful day yet of its vaccination campaign this week.

Still, Jens Spahn called for caution as authorities move toward allowing a more normal life, urging officials to hold off on fully reopening restaurants and calling for Germans to choose vacation destinations carefully.

The national disease control center, the Robert Koch Institute, said the number of weekly new cases per 100,000 inhabitants stood at 96.5, the first time since March 20 it has been under 100. There are still considerable variations between regions, many of which are still subject to an overnight curfew and other rules that kick in when an area's weekly infections top 100 per 100,000 people.

At the same time, Germany's vaccination campaign, which was much criticized for a slow start, is accelerating. Spahn said 1.35 million shots were administered on Wednesday, the highest one-day total so far. There were 408,260 on Thursday, a holiday.

The improving situation is raising hopes of restaurants, for example, reopening after months of closures. However, Spahn stressed the need for caution, saying that activities outdoors can be allowed but appealing for regional authorities to wait until weekly new cases drop below 50 per 100,000 residents before reopening indoor parts of restaurants.

“We must all take great care ... to secure what has been achieved and not want too much too quickly, because that could backfire,” Spahn said during a visit to a vaccine storage and distribution center.

Prospects of summer vacations also are rising. While Germany never banned nonessential travel, the government is still advising against it but expects to relax that advice in time for the summer.

“I can only advocate choosing and planning on destinations which really are very, very low (in terms of infections) and, in case of doubt, not going on a faraway journey,” Spahn said.

“So ... more the North Sea than the south seas,” he added. “I understand the longing, but we are still in the pandemic. There are many regions of the world that are still very, very hard hit by the pandemic.”

Foreign Minister Heiko Maas said there won't be a repeat of the concerted government-arranged repatriation flights in the first phase of the pandemic if something does go wrong somewhere.

He told the Funke newspaper group that “if the pandemic situation were to worsen in certain countries, that can’t surprise anyone anymore today, in 2021, in contrast with last year.”