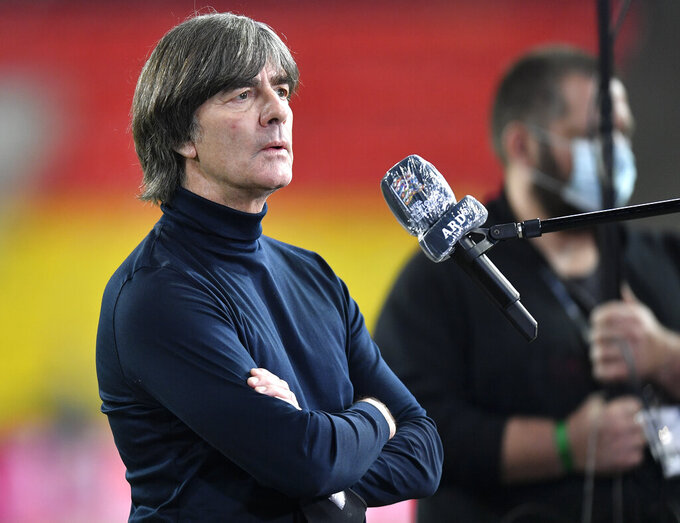 FILE - In this Tuesday, Oct. 13, 2020 file photo, Germany's head coach Joachim Loew is interviewed ahead of the UEFA Nations League soccer match between Germany and Switzerland in Cologne, Germany. Loew on Tuesday, Nov. 10 says an overloaded soccer calendar is endangering players’ health and the problem will get worse as next year's European Championship approaches. Clubs around Europe are regularly playing twice a week after the coronavirus pandemic delayed the start of the season. (AP Photo/Martin Meissner, file)

Clubs around Europe are regularly playing twice a week after the coronavirus pandemic delayed the start of the season. Most European national teams have scheduled friendlies for this week, too, packing three games into the current international break.

Löw added his criticism of the pandemic-affected schedule to that voiced by coaches such as Liverpool's Jürgen Klopp and Manchester City's Pep Guardiola.

With reduced winter breaks in many leagues, the coming months could lead to more injuries, Löw said.

“We're treading a thin line ... the cold months, the difficult conditions outdoors and also sometimes for training and games in a three-day rhythm,” he said. “If we as coaches don’t exercise the utmost caution, the ones who don’t do that will have a big problem next year.

“And some people, those who are responsible for the calendar and other things, have to put their heads together and take decisions for the future ... because the calendar is also too full in general. The players have to bear the consequences.”

Löw said Bayern Munich, Leipzig, Borussia Dortmund, Real Madrid and Manchester City — who all have players in the German team — have particularly packed schedules coming up in November and December.

“The really difficult phase is coming now, without the winter break,” he said. "Every coach has to be clever if he wants to have fresh, physically healthy players next year in March or April.”

Löw has allowed seven players to skip Germany's friendly against the Czech Republic on Wednesday to let them rest before Nations League games against Ukraine and Spain. They have all been playing Champions League games in recent weeks, including goalkeeper Manuel Neuer, midfielder Toni Kroos and forward Timo Werner.

“We have to allow some players a break because health counts above all,” Löw said.

Bayern midfielder Joshua Kimmich is out of the German team after he injured the meniscus in his right knee during Bayern's 3-2 win over Borussia Dortmund on Saturday. The Leipzig pair of center back Lukas Klostermann and left back Marcel Halstenberg are also unavailable because of injuries.