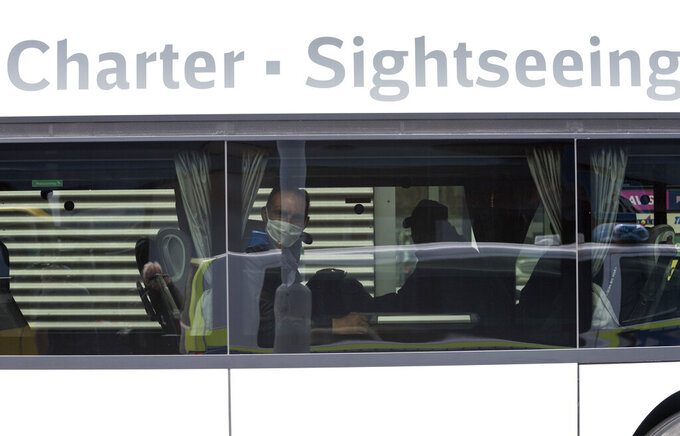 A man wearing a face masks as he sits in a bus after arriving from Craiova in Romania at the 'Schoenefeld Airport' in Berlin, Germany, Thursday, April, 2020. The first planes with harvest workers from Romania have been landing in the morning. (Soeren Stache/dpa via AP)

BERLIN (AP) — Two planes carrying Eastern European farmhands arrived Thursday in Germany as an ambitious government program to import thousands of seasonal agricultural workers got underway amid strict precautions to protect both the laborers and the country from the new coronavirus.

The flights to Berlin and Duesseldorf were arranged to address a massive labor shortage created when Germany banned most foreign travelers from entering the country last month in response to the virus outbreak.

Seasonal workers caught up in the ban were not available to pick asparagus, which has already sprouted in Germany, and to plant other crops in the fields where some 300,000 such workers were employed last year.

Most came from Eastern European countries such as Romania, Bulgaria, Ukraine, and Hungary, where wages are much lower than in Germany, which is Europe’s largest economy.

Mariana Hopulele, 43, waited at the airport in the central Romanian city of Cluj with her 17-year-old son, Valentin, for the flight to Duesseldorf. While farm work in Germany is physically demanding, "there is no way to find work that pays enough to support one's family” in Romania, she said.

“I have worked for 15 years abroad, the last eight in Germany on asparagus farms," Hopulele said. "Our contract says we work eight hours a day, but we actually work 10 to 12 hours, seven days a week. It's very, very tough but we do get compensation for the extra hours.”

Under the new program, workers are flown to Germany in controlled groups — to prevent possible infection en route — and are subject to medical checks upon arrival. They will be required to live and work apart from the farmhands already in Germany for two weeks and wear protective gear.

German Agriculture Minister Julia Kloeckner described the program as a “pragmatic and goal-oriented solution” that would bring up to 40,000 seasonal workers into the country in April and 40,000 more in May. The government hopes to recruit an additional 20,000 during the two months among people in Germany who are unemployed, students or resident asylum-seekers, the minister said.

“This is important and good news for our farmers,” Kloeckner said. “Because the harvest doesn’t wait, and you can’t delay sowing the fields.”

Farmers had brought in some 20,000 workers before virus-related travel bans were imposed, and Germany has extended the time seasonal workers are allowed to stay from 70 days to 115 days, Kloeckner said at a press conference at a Frankfurt-Hahn airport.

The government will work with farmers along the way to determine if more needs to be done, she said.

“We will need to always reevaluate the situation and then act, and act quickly,” she said.

Ahead of time, interested workers have to register online and have their information checked by federal police. Farmers needing help register online with the airlines contracted to bring the workers in, saying when they’re needed and where.

Flights are then organized to bring in groups, and the first group of workers, 530 people from Romania, arrived on Thursday in Duesseldorf and Berlin, said Eurowings, the airline contracted for the initial group of workers. Further flights were already planned to Duesseldorf, Karlsruhe, Leipzig, Nuremberg and Frankfurt.

Nicoleta, another worker waiting to board a plane in Cluj who did not want to give her last name, said she had traveled to Germany every fall for the last seven years to help make Christmas decorations. With everything uncertain due to the pandemic, she said she leapt at the opportunity to work on an asparagus farm instead.

“We are happy we can go work in Germany” she said. "It is an opportunity. I can go there to earn enough to properly raise my two little children.

Other countries in Western Europe have taken different approaches, like in France where authorities and the agricultural sector have launched a call for local residents to help in the fields, called “arms for your plate.”

Spain is trying to prevent a critical shortage of workers for its important agriculture industry in its sunny south, which helps feed the nation as well as providing Europe with exported fruit and vegetables.

Earlier this week, the government launched a campaign to try and find 75,000 residents to help, and extended seasonal migrants' work permits.

“If we do not harvest this produce, we will see a drop in our ability to supply our markets, and (that) could increase prices,” said Spanish Agriculture Minister Luis Planas.

Kloeckner, the German minister, cautioned that with the additional costs to fly in the seasonal workers, Germany will also likely see an increase in the cost of fruit and vegetables.

“We live in very challenging times,” she said.

This version has been corrected to show surname of quoted worker is Hopulele, not Hopulete.

Raul Stef in Cluj, Romania, Angela Charlton in Paris and Joseph Wilson in Barcelona contributed to this report.