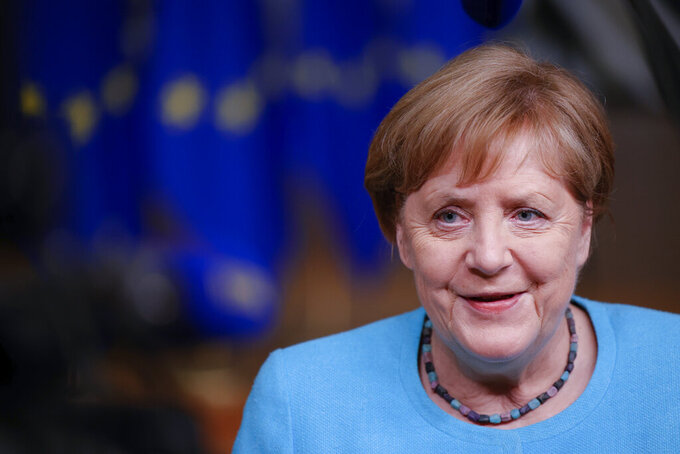 Germany's Chancellor Angela Merkel gives a statement at the end of the first day of an EU summit at the European Council building in Brussels, early Friday, June 25, 2021. At their summit in Brussels, EU leaders are set to take stock of coronavirus recovery plans, study ways to improve relations with Russia and Turkey, and insist on the need to develop migration partners with the countries of northern Africa, but a heated exchange over a new LGBT bill in Hungary is also likely. (AP Photo/Olivier Matthys, Pool)

BERLIN (AP) — The German government on Friday hinted at possible tweaks to an agreement between the European Union and Britain on how to set border controls with Northern Ireland. The move could help resolve a long-running dispute between Brussels and London.

Spokeswoman Ulrike Demmer avoided replying directly to a question on what Germany thinks of the EU executive arm's implied willingness to impose punitive tariffs if Britain doesn't comply with the Brexit deal.

But she cited Merkel's comments at the recent Group of Seven meeting in Cornwall, at which the German leader had called for “pragmatic solutions" within the framework of the accord, especially on border checks between Britain and Northern Ireland.

Northern Ireland is the only part of the U.K. that borders the 27-nation bloc. The debate over exactly where to conduct customs controls has raised political tensions in the territory where some people identify as British and some as Irish.

Demmer said that Merkel had spoken out in favor of “considering where one can improve matters if it better serves the citizens in Northern Ireland.”

Merkel's trip next Friday to Chequers — the British prime minister's country retreat — will be one of the last bilateral trips of her 16-year chancellorship. The 66-year-old is not running for a fifth term in Germany's national election on Sept. 26.

Germany has imposed strict quarantine rules for travelers coming from Britain due to concerns about the highly contagious delta variant of COVID-19 that's dominant there. But Demmer said “all precautionary measures” would be taken during Merkel's trip and that there would be only limited contacts.

Merkel recently received her second dose of vaccine against COVID-19.