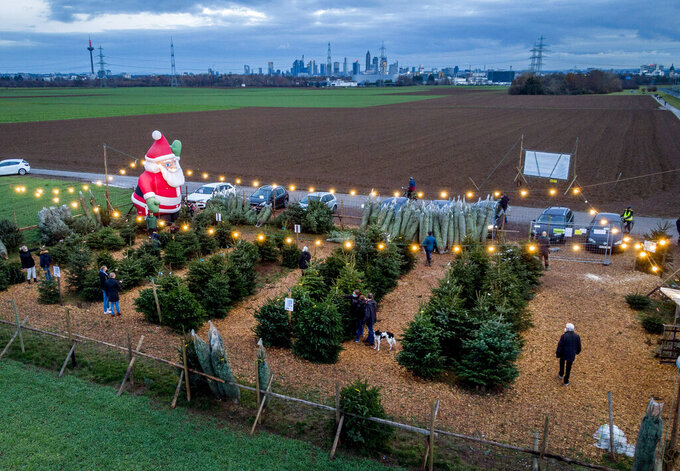 Christmas trees for sale on the outskirts of Frankfurt, Germany, Sunday, Dec. 13, 2020. Chancellor Angela Merkel said she and the governors of Germany’s 16 states agreed Sunday to step up the country’s lockdown measures from Dec. 16 to Jan. 10 to stop the exponential rise of COVID-19 cases. (AP Photo/Michael Probst)

BERLIN (AP) — Germany's health minister demanded that the European Union's regulatory agency work faster to approve a coronavirus vaccine and bring an end to the suffering on the continent, but the head of the agency said Monday that his team is already working “around the clock.”

Other German officials suggested that residents should forgo Christmas shopping and attend Christmas Mass online as a new lockdown loomed that will close schools and most stores.

Chancellor Angela Merkel and the governors of Germany’s 16 states agreed Sunday to step up the country’s lockdown measures beginning Wednesday and running to Jan. 10 to stop the exponential rise of COVID-19 cases. Germany has been hitting records of new daily infections and virus deaths in recent weeks, and Merkel said exisiting restrictions imposed in November had failed to halt the rise in new infections.

Expressing impatience, Health Minister Jens Spahn said in tweets late Sunday that Germany, which has created more than 400 vaccination centers and has activated about 10,000 doctors and medical staff to start mass vaccinations as early as Tuesday, was hamstrung by the lack of regulatory approval.

It was especially galling because the vaccine developed by Germany's BioNTech and American drugmaker Pfizer has been authorized for use in Britain, the United States, Canada and other countries. But it's still waiting for approval by the European Medicines Agency, or EMA, and can therefore not be used in Germany yet or in any of the EU's 27 nations.

The EMA has a Dec. 29 meeting on vaccines but Spahn said the agency's assessment and approval of the Pfizer-BioNTech vaccine should “take place as quickly as possible.”

“This is also about the trust of the citizens in the European Union’s capacity to act,” Spahn wrote. “Every day that we can start sooner with the vaccinations lessens the suffering and protects those who are the most vulnerable.”

In response to questions from The Associated Press about Spahn’s tweets, the executive director of the EMA said Monday that the agency is “working around the clock towards the licensing of the first COVID-19 vaccine.”

Emer Cooke said while EMA’s expert committee was expected to give its recommendation by Dec. 29 at the latest, “these timelines are of course constantly under review."

“European citizens have told us they want a fast approval, but more importantly they want a thorough evaluation of the benefits and the risks of the vaccine, so that they can be confident it is safe, effective and of high quality,” Cooke added.

Spahn's ministry said Monday that Germany was ready to give 3 million to 4 million BioNTech vaccination doses in January and up to 11 million doses in the first quarter of 2021.

In recent weeks, hospitals across Germany have repeatedly warned they are reaching their limits in caring for COVID-19 patients. On Monday, 4,552 COVID-19 patients were being treated in ICUs.

“The virus still has a tight grip on us,” Steinmeier said. “The situation is bitterly serious: Thousands of death cases in one week and an infection scenario that threatens to spin out of control. There is no way we can avoid drastic measures.”

“I wish and I hope that people will only buy what they really need, like groceries,” Economy Minister Peter Altmaier said. “The faster we get these infections under control, the better it is for everyone.”

In some states, including Saxony in eastern Germany and North Rhine-Westphalia in the west, schools are already closed or mandatory school attendance lifted so parents can keep their children home.

Starting Wednesday, schools nationwide will be closed or will switch to home schooling; most non-food stores will be shuttered, as will businesses such as hairdressers. Restaurant takeout will still be permitted, but no eating or drinking can take place on site.

With the exception of Christmas, the number of people allowed to meet indoors will remain restricted to five, not including children under 14. The sale of fireworks to celebrate New Year’s will also be banned as will public outdoor gatherings on New Year’s Eve.

Michael Kretschmer, the governor of Saxony, told the German news agency dpa that this Christmas, for the first time in his life, he won't be attending midnight Mass.

“I don’t need it for my belief and I think it is right if all of us hold off during this sensitive time,” Kretschmer said. ”Joseph and Mary were also on their own on the Holy Night.”

This story corrects the quote in the final paragraph to “Joseph and Mary” instead of “Jesus and Mary.”

Mike Corder contributed reporting from The Hague, The Netherlands.