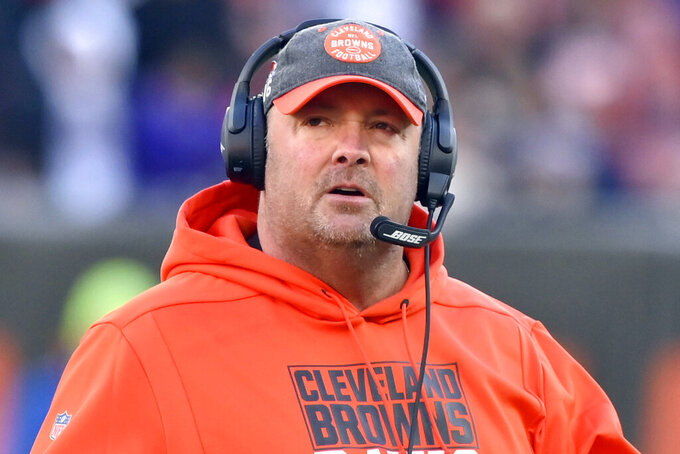 FILE - In this Dec. 22, 2019, file photo, then-Cleveland Browns head coach Freddie Kitchens walks on the field during the fourth quarter of an NFL football game against the Baltimore Ravens in Cleveland. Freddie Kitchens was fired after one stormy season as Browns coach. On Sunday, Dec. 20, 2020, he'll get at shot at some personal payback. Kitchens will call plays for New York on Sunday night against Cleveland after Giants offensive coordinator Jason Garrett tested positive for COVID-19 on Thursday. (AP Photo/David Richard, File)

Rookie coach Joe Judge and his staff have planned for almost any eventuality relating to either a positive COVID-19 test or an outbreak.

With the team heading into its 14th game, the virus struck the coaching staff for the first time. Garrett tested positive Tuesday and is sidelined. So Kitchens is shedding his role as tight ends coach and will call plays for the Giants (5-8) on Sunday night.

Coincedentally, he'll be facing the Cleveland Browns (9-4), the team that fired after a disastrous first year as coach.

“We’ve prepared for this throughout the year in training camp and things like that,” Kitchens said Friday. "So it’s just kind of the next game and it just happens that, you know, we had a guy go down this year or this week.”

While he is familiar with some of the Browns' players, Kitchens said Cleveland's roster has changed a bit.

Kitchens deferred to Judge when asked whether he knew whether quarterback Daniel Jones (hamstring-ankle) would be replaced this week by backup Colt McCoy. He also sidestepped questions about his play-calling style.

“I don’t get into self-descriptions of things I do and stuff like that,” Kitchens said. “I kind of just try to do the best I can for the team, for our staff, for our players, and try to the best of my ability to try to put players in position to make plays.”

Kitchens laughed when asked if he planned new wrinkles for the offense, questioning whether a reporter was trying to get him to give away the game plan for one of the worst offenses in the NFL.

“Nothing is changing with our offense,” Kitchens said. “Our offense is our offense, and we’re just going to try to execute on a consistent basis truly. I couldn’t be any more truthful than that.”

Judge said some of the play calling can be scripted, but not for an entire game. Adjustments have to be made based on what is working and what is not.

“When he gets into the game, he has to be able to call plays as he sees fit to help this team,” Judge said. “We’ll discuss those situations and scenarios before we get to Sunday, like I do every week with all of the coordinators, and make sure that we’re on the same page in terms of, ‘OK, what are you thinking in these situations?’”

Bobby Blick, who helps Kitchens work with the tight ends, will have a bigger role with the group Sunday, Kitchens said.

Browns cornerback Denzel Ward was amused hearing Kitchens would have a new role.

“That is something like written in a book,” said Ward, who may return Sunday after missing three games with a calf injury. "He was obviously here and then get to call plays against us. So looking forward to that.”

Ward would not be surprised if Kitchens has some surprises in store.

“We just have to do our assignment, stay to our man and take care of business,” he said.