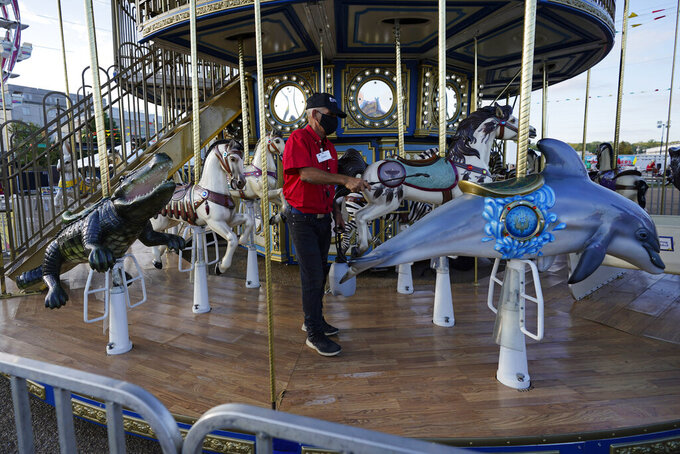 A merry-go-round operator sprays down one ride following use at the Mississippi State Fair in Jackson, Miss., Wednesday, Oct. 7, 2020. The fair's grand opening went ahead as planned amid criticism that masks will not be required at the event after Gov. Tate Reeves repealed the state's mask mandate. However, boxes of face masks were available at each entrance for those who wanted one. And ride operators cleaned all seats and posts after each ride session. (AP Photo/Rogelio V. Solis)

Gipson said in a Monday news release that the fair will open again Thursday morning for a four-day run. It will feature 58 rides, games, food and the Mississippi Department of Agriculture and Commerce’s Biscuit Booth. There also will be a Saturday concert by The Gaither Vocal Band.

Some attractions won't be back for the extension, including the petting zoo, pig races, pony and camel rides, Fetch-N-Fish, the Timberworks Lumberjack Show, and Mississippi Trade Mart exhibits.

“The extension provides the Mississippi State Fair the opportunity to continue its time-tested, fall tradition that has been a staple of the Jackson area for 161 years," Gipson's release said.

Gipson said Monday on Twitter that days are being added because Hurricane Delta brought rain that hurt attendance during the first weekend.

The fair was also affected by the COVID-19 pandemic. Gov. Tate Reeves lifted Mississippi’s statewide mask mandate before the fair started. Gipson encouraged people at the fair to wear masks if they could not maintain social distance.

Overall attendance figures for the 12 days were not available Monday.