Gladbach may host Man City outside Germany because of virus 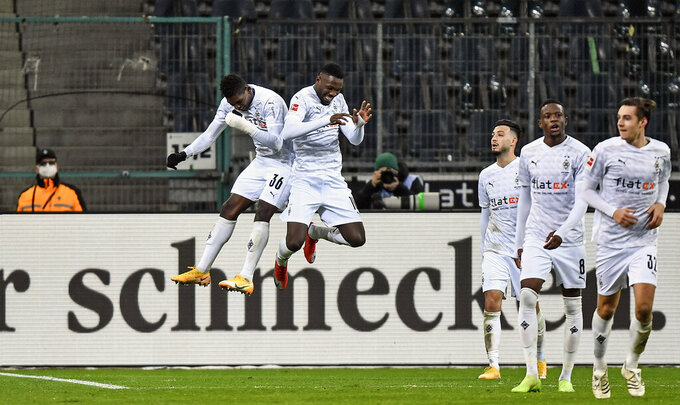 MÖNCHENGLADBACH, Germany (AP) — Borussia Mönchengladbach is making plans to host Manchester City outside Germany in the last 16 of the Champions League, with Denmark a possible venue, the German club said Friday.

The German authorities are currently blocking almost all entry to the country from Britain to restrict the spread of new variants of the coronavirus. On Thursday, the authorities confirmed that Leipzig can't host Liverpool in Germany on Feb. 16.

The current German travel rules are set to expire on Feb. 17, a week before Gladbach hosts City on Feb. 24, but could be extended. Gladbach sporting director Max Eberl said the club had made inquiries with venues including Danish club Midtjylland, which played in the group stage of the Champions League this season.

“It appears that in Germany, because of the mutated virus, we are not allowed to have any English teams coming in, which affects Leipzig and Liverpool, and us and Manchester City,” Eberl said. “The situation right now is that we can't play in Germany, that we can't play at the Borussia Park, and instead that we should and must look for an alternative location."

Eberl said Gladbach had held talks with German politicians, health authorities and UEFA, and that various options were considered, including switching the home and away legs to play in Manchester first.

UEFA is open to delaying games affected by travel bans. It has set April 2 as the latest possible date to finish the last 16 games in time for the quarterfinals.

In the Europa League next week, Arsenal's game against Benfica could be affected by British travel restrictions, and Norwegian travel rules could stop Molde from hosting German club Hoffenheim.