A glance at bills passed by the Maryland General Assembly 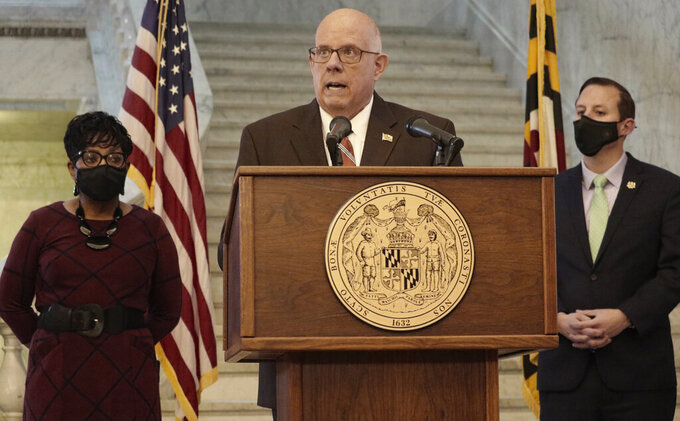 ANNAPOLIS, Md. (AP) — Maryland lawmakers have their annual 90-day session, working all the way up to the midnight deadline Monday. Here is a glance at some of the measures the General Assembly passed this session:

Gov. Larry Hogan and lawmakers were quick to enact more than $1 billion in pandemic relief early in the session. It included more than $178 million in direct payments to more than 400,000 state residents. A tax credit for low-income residents was expanded by an estimated $478 million over the next three tax years. To help the unemployed, state and local income taxes were repealed on unemployment benefits for tax years 2020 and 2021. Small businesses also received a break on sales taxes.

Lawmakers passed an extensive package of police reform measures. It includes repeal of police job protections in the Law Enforcement Officers Bill of Rights, a statewide use-of-force policy, limits on no-knock warrants and an expansion of public access to records in police disciplinary cases. It also requires body cameras statewide by July 2025. Hogan vetoed those measures, but the legislature overrode the vetoes.

Lawmakers overrode Hogan’s veto from last year of a sweeping 10-year plan to improve the state’s K-12 schools, which is known as the Blueprint for Maryland’s Future. They also passed a bill this year to revise the plan to adjust for learning loss due to the pandemic, including more tutoring and money for digital devices.

Lawmakers voted to settle a 15-year federal lawsuit over inequitable funding at the state's four historically Black colleges and universities for $577 million. Hogan has signed the measure.

Lawmakers passed legislation so that “Maryland, My Maryland," a Civil War-era call to arms for the Confederacy against “Northern scum” that refers to President Abraham Lincoln as a despot, will lose its status as the state song.

Maryland will abolish life sentences without possibility for parole for juveniles. Hogan vetoed the bill, but the legislature overrode the veto.

Lawmakers voted to repeal a requirement that parole for an inmate serving a life sentence must be approved by the governor and puts the decision in the control of a parole commission.

Lawmakers approved changing how the state compensates people who have been wrongly imprisoned for crimes they didn’t commit. The measure sets a standard process for compensation through an administrative law judge and the bill repeals current state law that leaves payments to the discretion of the Maryland Board of Public Works.

Lawmakers passed a bill to prohibit local jails from entering into agreements that facilitate immigration-related detentions.

A process will be created to designate “Health Equity Resource Communities" to target resources to specific parts of the state to reduce health disparities and promote prevention services.

Sports wagering would be allowed at casinos, the stadiums where the state’s three professional sports teams play and horse racing tracks. The state also would allow 30 licenses for businesses that want to offer sports betting and up to 60 more licenses for online betting.

College athletes would be able to earn money from endorsements. The Jordan McNair Safe and Fair Play Act, named for the former University of Maryland offensive lineman who died in 2018 after suffering heatstroke at a team workout, would require athletic departments to implement guidelines to prevent and treat serious sports-related conditions.

Legislation would exempt the news media from a first-in-the-nation tax on digital advertising by Big Tech companies like Facebook and Google. It also would prohibit the companies from passing the cost of the tax on to consumers.

A package of measures are aimed at improving the state's unemployment system, after lawmakers have been flooded with complaints over the coronavirus pandemic from their constituents about delays, difficulties and unresponsiveness.