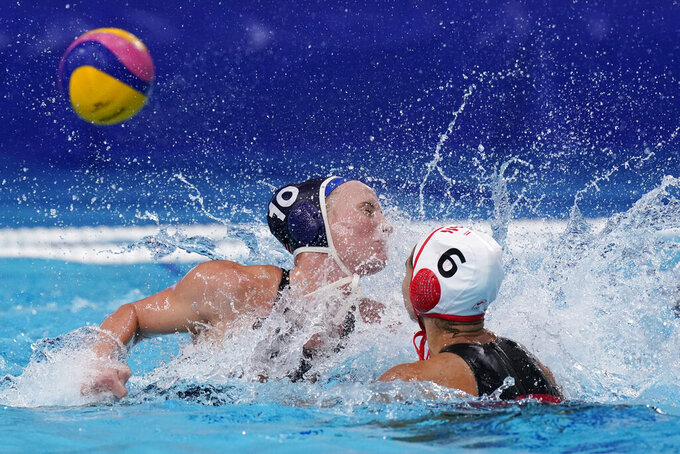 So she waited patiently for an Olympic debut that she knew might never come. She was active for two U.S. games in group play, but didn't get in. Coach Adam Krikorian put her back on the roster for the quarterfinals, and this time, it worked out.

Longan relieved Ashleigh Johnson and played the fourth quarter as the U.S. rolled into the semifinals of the Tokyo Games with a convincing 16-5 victory over Canada. She finished with three saves on five shots and an experience that she will never forget.

“Honestly, I thought when I would get my chance I would be super, super nervous,” Longan said. “But honestly, today, I was just more happy and grateful to have that time than anything.”

Maggie Steffens, Makenzie Fischer and Alys Williams each had three goals as the U.S. stayed in the hunt for its third consecutive gold medal. The Americans improved to 21-1 this year, with their lone loss coming against Hungary last week.

“I think it's been a different level after that Hungary game,” Krikorian said. “This doesn't guarantee us anything, but it was a little bit of awakening for us and just got back to, again, the fundamentals and just playing the right way.”

Spain, the Russian team and Hungary also won Tuesday. Judith Forca Ariza scored four times to lead Spain to an 11-7 victory over China. The Russians held off Australia for a 9-8 win, and Hungary topped the Netherlands 14-11 in a dramatic finish.

“Intense. Extremely intense,” Hungary player Rebecca Parkes said. “I mean we knew this was going to be exactly this hard.”

Dorottya Szilagyi and Dora Leimeter scored in the final 39 seconds to help close it out. Hungary goalkeeper Alda Magyari hit her left hand on the cage in the final minute, but she stayed in and said she was fine after the win.

Hungary will take on Spain in Thursday's semifinals, and the U.S. will face the Russian team.

Longan quickly ditched her sandals when Krikorian gave her the go-ahead, and she shot Johnson a wide grin after she jumped into the water. Johnson helped Longan warm up before taking a seat on the bench to cheer her on.

“It's so cool. Like goalie gang,” Johnson said. “It's always supporting that girl, seeing the work that she puts in day in and day out, and the way that we push each other and help each other grow in this sport.”

Longan, 24, led Southern California to NCAA titles in 2016 and 2018. She also won the Cutino Award winner in 2018, given to the nation’s top collegiate water polo player.

Longan isn’t used to watching someone else play — but the U.S. also has the athletic Johnson, who made 14 saves against Canada.

It could have been a tricky situation for Krikorian to manage, but Johnson and Longan have made it work with a relationship based on the talent they see in each other, and an overwhelming desire to help the team win.

“If we didn't get along, I still think that the respect that we have for each other would overrule the potential awkwardness,” Johnson said. “But we have a good relationship.”

Krikorian had been looking for a spot for Longan since the tournament started. But he never had a chance during her two games on the bench in a group play; a tight 12-7 victory over China, and Wednesday's 10-9 loss to Hungary.

In Krikorian's first Olympics as U.S. coach in 2012, he did not get backup goalkeeper Tumua Anae Tavana into a game — something he carries with him to this day. He called Tavana "one of my favorite players and people of all time.”

Sami Hill played behind Johnson at the 2016 Rio de Janeiro Games, and now Longan has her first Olympic appearance.

“Amanda is one of the fiercest competitors I've ever seen,” Krikorian said. “But yet, she's also one of the most selfless players. And so when you have a backup goalie like that and then you have someone like Ashleigh, who's obviously phenomenal, but she carries herself with so much grace and humility. It makes my job so much easier.”