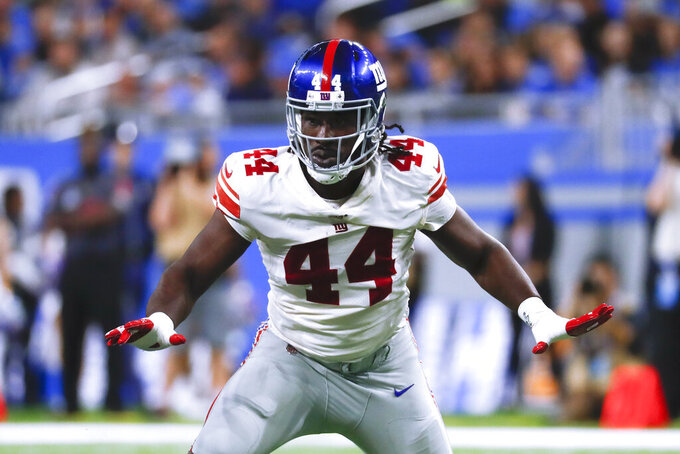 FILE - In this Oct. 27, 2019, file photo, New York Giants linebacker Markus Golden plays against the Detroit Lions during an NFL football game in Detroit. Free agency has not been good to linebacker Markus Golden. The 29-year-old pass rusher had to settle for a one-year deal from the New York Giants in 2019 because he was coming off a so-so season with the Arizona Cardinals following a major knee injury in 2017. (AP Photo/Paul Sancya, File)

Free agency has not been good to linebacker Markus Golden.

The 29-year-old pass rusher had to settle for a one-year deal from the New York Giants in 2019 because he was coming off a so-so season with the Arizona Cardinals following a major knee injury in 2017.

This past offseason was no better. Teams didn't want to meet his asking prize of roughly $10 million annually after a team-high 10-sack season and the Giants ended up keeping his exclusive rights for this season by placing a rarely used May 5 tender on him.

When no other team gave him a contract by July 22, the Giants got him back for $4.1 million and a $1 million incentive clause.

Golden on Monday said he had never heard of a May 5 tender offer, which gives a player's last team his exclusive right if he is not signed. But he said the NFL is a business and the Giants used a business move to keep him. No bitterness.

There was frustration with how the free agency system has worked for him.

“You put in a lot of work during the season,” Golden said. “You know, this a game where they say if you put the work in, the hard work pays off and the game is going pay you back in different ways. So, of course, it was frustrating. but you go back to that business is business mindset, because that’s the mindset you’ve got to have in this business.”

The bottom line is the snub will be motivation for Golden in this strange season caused by the coronavirus pandemic. He will have a cap hit of roughly $5.1 million for the Giants.

This should be an interesting season. A second-round draft pick by Arizona in 2015, Golden has played in a defensive scheme run by James Bettcher most of his career, first with the Cardinals and then the Giants.

With Joe Judge taking over as coach and hiring Pat Graham as his defensive coordinator, Golden is learning a new system.

Golden doesn't mind being back. He enjoyed his season here in 2019 despite the 4-12 record that led to the firing of coach Pat Shurmur after just two seasons.

The defense is coming off a bad season, but now has some talent at linebacker with Golden back to help a weak pass rush in the 3-4 scheme.

The Giants have two young linebackers in Lorenzo Carter and Oshane Ximines, and they signed former Packers Blake Martinez and Kyle Fackrell to bolster the group that includes Ryan Connelly, who was having a good rookie season until a knee injury.

“At the end of the day, I love playing ball,” Golden said. “That’s what I’m about. I’m playing ball. I love competing and in this situation I am in right now. I can't sit back and complain about it. I’ve got to go out and get it and that's the mindset I am going to keep.”

The Giants gave him a one-year prove-it contract and he did. It just didn't pay off, in part because New York could not afford his 2020 price tag and most teams seemed wary about signing him.

Golden said the Giants know what to expect from him. He is going to play hard.