Gonzaga and Baylor to face off in rare top-2 meeting 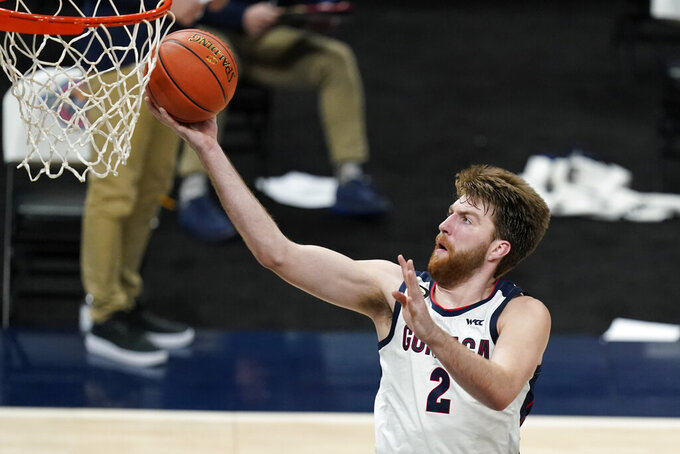 Gonzaga's Drew Timme goes to the basket during the second half of the team's NCAA college basketball game against West Virginia, Wednesday, Dec. 2, 2020, in Indianapolis. (AP Photo/Darron Cummings)

The first week of the college basketball season was filled with great games, a few upsets, stellar performances and a handful of coronavirus cancelations.

Top-ranked Gonzaga and No. 2 Baylor will play in Indianapolis on Saturday for the ninth meeting between the top two teams in AP Top 25 since 2005.

Top-ranked Michigan State and No. 2 Kentucky met last season in the previous 1-vs.-2 meeting, a game won by the Wildcats 69-62.

The Zags and Bears both won Wednesday, setting up a showdown for the No. 1 ranking next week.

Gonzaga blew through its first two opponents, beating No. 7 Kansas and Auburn by a combined 35 points.

The Zags faced a much stiffer test against No. 11 West Virginia Wednesday night in Indianapolis. The rugged Mountaineers stymied the Zags throughout the first half and Gonzaga suffered a scare late when talented freshman Jalen Scruggs went down with a left foot injury.

Suggs managed to return in the second half and so did the Zags' offensive efficiency, helping them hold on for an 87-82 win.

Baylor pulled out of a multi-team event in Connecticut after coach Scott Drew tested positive for COVID-19 and played its first two games under assistant coach Jerome Tang.

The distractions did nothing to slow the Bears.

Playing in Las Vegas, Baylor opened with a 112-82 win over Louisiana-Lafayette and followed with an 96-52 thumping of Washington.

Drew returned for Wednesday's game against No. 5 Illinois and the Bears were glad to see him again.

“We’re all really excited,” guard Davion Mitchell said. “We all gave him hugs when he came off the plane, so we’re ready to get to work.”

The excitement carried over into the late-night game, an 82-69 win over the Illini to set up a showdown for No. 1 against the Zags.

WILDCATS AND LONGHORNS: The only other game between ranked teams this week should be a good one: No. 12 Villanova at No. 17 Texas on Sunday.

Longhorns coach Shaka Smart has a new look after growing out his hair and a team that's primed to make some noise in March. The Longhorns are experienced, talented and have one of the nation's best backcourts in Matt Coleman III and Greg Brown III.

Texas (4-0) had to eke out a two-point win over Davidson to open the Maui Invitational — relocated to Asheville, North Carolina during the pandemic — but looked sharp the final two games to win the title.

The Longhorns blew out Indiana in the semifinals and beat No. 14 North Carolina 69-67 on Coleman's step-back jumper with less than a second left.

Jay Wright's Wildcats opened the season in Bubbleville and opted to stay in Connecticut to face Hartford. Villanova won that game 87-53 to bounce back from its first loss of the season, 81-73 to No. 16 Virginia Tech.

The Wildcats, who opened the season with wins over Boston College and No. 25 Arizona State, have four players scoring at least 13 points per game, led by Jeremiah Robinson-Earl.

It should be a nice little Sunday in Austin.

HOUSTON RISING: No. 10 Houston picked up its first marquee win of the season on Sunday, knocking off No. 19 Texas Tech in Fort Worth.

The Cougars (3-0) face another test on Saturday with South Carolina coming to town. The Gamecocks lost their opener to Liberty, but Frank Martin's bunch plays a hard-nosed defense that makes it tough on any team they face.

Houston is averaging 78.5 points per game and Marcus Sasser has gotten off to a superb start, scoring 17.5 points while making 9 of his 16 shots from the 3-point arc.