Good news for Raptors: In Tampa, no conflict with badminton 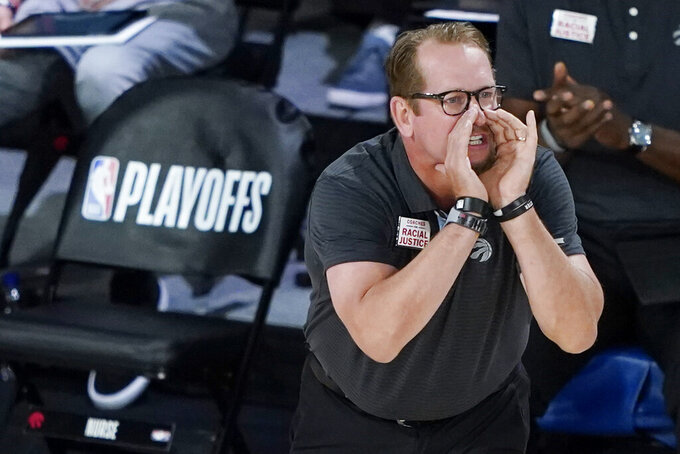 FILE - Toronto Raptors' head coach Nick Nurse yells to his players during the first half of an NBA basketball conference semifinal playoff game against the Boston Celtics in Lake Buena Vista, Fla., in this Sunday, Aug. 30, 2020, file photo. Nick Nurse isn’t exactly sure yet how the practice setup for the Raptors will work this season at the team’s temporary home in Tampa, Florida. He is certain of this much: It won’t be the most challenging of his career.(AP Photo/Ashley Landis, File)

Nick Nurse isn’t exactly sure yet how the practice setup for the Toronto Raptors will work this season.

He is certain of this much: It won’t be the most challenging of his career.

Go back to 30 years ago, when the Raptors coach and reigning NBA coach of the year was in England leading the Derby Rams. His team could afford to rent a court to hold practices on Tuesdays and Fridays. And the Rams couldn’t get on the floor until exactly 7 p.m., because badminton nights never ended early.

“Literally, it’d click 7 o’clock, and they’d take the nets down and we’d come onto the floor,” Nurse said.

It wasn’t perfect, but Nurse made it work.

To the best of everyone’s knowledge, there is no badminton club in Tampa, Florida that will be needing to share a venue with the Raptors this season. Toronto will open the season playing “home” games at Amalie Arena, home of the Stanley Cup champion Tampa Bay Lightning, and the plan is for the Raptors to practice inside a ballroom at a nearby hotel when they’re in Tampa.

The combination of Nurse’s somewhat nomadic coaching life and the fact that the Raptors just went through a most nontraditional existence in the NBA’s restart bubble at Walt Disney World earlier this year have him convinced that this season’s setup, while not ideal, will work as well.

“There’s been some other doozies in there,” Nurse said as he thought back some of the other practice setups over a career that has seen him coach in England, Belgium, the United States Basketball League and the NBA Development League before it was called the G League. “But I always say, just get me to a practice floor, to the games and we’ll be happy.”

The Raptors are spending this week getting settled in the Tampa area, holding training camp through Dec. 11 at Saint Leo University, about a half-hour drive north of where the 2019 NBA champions will be playing their home games. Nurse said he’s getting settled into his new routine of hotel living. Players and staff are getting used to what will be the new normal, at least for a few months. General manager Bobby Webster is looking for a good place to get a cup of coffee.

“It’s a huge strain on us as an organization,” Webster said. “But when faced with different challenges or obstacles we thrive and we like it. So, we’re looking at it much more as a really unique experience for our team, for our staff. Most of us came from Disney where we had a similar situation, so it’s not altogether foreign for us.”

The Raptors are slotted to play just one home preseason game, that being Dec. 18 against Miami. Their schedule to start the regular season should be finalized in the coming days; the final drafts are being worked through now.

They are in Tampa because of the coronavirus pandemic and how it forced the closure of the U.S.-Canada border to non-essential travel. The Raptors tried to find ways to get government clearance around that, but for many reasons — numbers spiking in both countries being among them — a solution to play games in Toronto wasn’t possible.

“I can only say this: I know I’d rather be in Toronto, but I’m not,” Nurse said. “And now I’m going to make the best of it here. I’m not going to make any excuses and I’m going to get to work and we’re going to expect to play at a super-high level. And that’s it. There’s a lot of things surrounding what’s happening and we’re going to do our best to focus in on just becoming the best basketball team we can become. And we do that with just accepting, here’s where we are.”