Goodell: Many lessons NFL learned in 2020 will carry forward 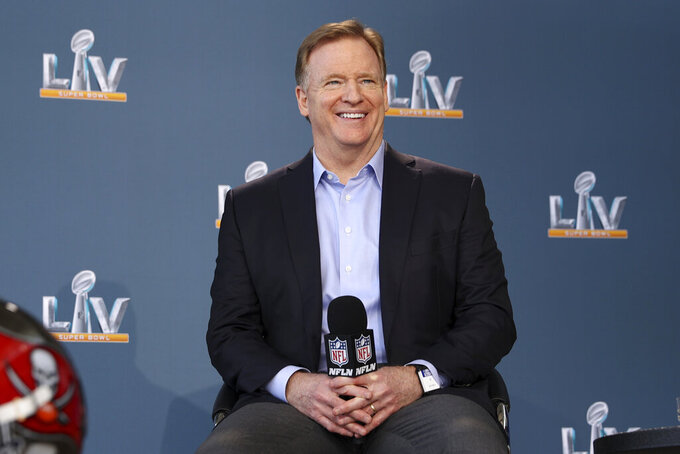 TAMPA, Fla. (AP) — The many lessons learned from 2020 will be needed as the NFL moves forward, Commissioner Roger Goodell noted Thursday in his annual state of the league news conference ahead of the Super Bowl.

Held before both in-person and virtual audiences and staged outside of the arena that is home to the NHL's Tampa Bay Lightning, Goodell said developments ranging from dealing with the coronavirus pandemic to minority coaching hires to scheduling to the NFL's working relationship with the players' union all will carry forward as major topics.

“I don’t know when normal will occur again or if normal will occur again,” he said. “I know we have learned to work in a very difficult environment, and we will do it again. That is one of the things we learned ... hearing clubs and the NFLPA saying our relationship has never been stronger. I interpret that as a trust that has been built here that will take us forward and will be the long-lasting legacy of this season.”

That legacy, on the positive side, includes something the other major sports leagues and organizations couldn't manage: playing a full season, uninterrupted, with the championship game on time despite COVID-19 issues.

“This was an extraordinary collective effort,” Goodell said. “There’s so many people that had to work together to get this done. There were doubters, people that didn’t believe we could do it, we had a lot of unknowns ourselves. We believed that staying on schedule and working to try to get 256 games done as we try to say, ’avoid the asterisk,' I think we were able to do that.”

But the negative part of the legacy, one that has plagued a league made up of 70% minority players, has been the head coach hiring cycle. Goodell said the league is not satisfied with only two minorities hired for seven head coach openings: The New York Jets hired Robert Saleh, the first NFL coach who is known to be Muslim and the son of Lebanese immigrants, and Houston hired David Culley, making him only the league’s third Black current head coach.

Goodell noted three African-American general managers were hired in 2020 and early 2021, with more diversity also seen among coordinators, something the NFL can build on. Asked if a hiring freeze on head coaches until after the Super Bowl would be discussed, Goodell said everything that could enhance diversity would be explored.

The offseason structure for the league is so uncertain that Goodell preferred not to be specific about training camps and preseason games, though he did say the NFL plans to hold international games next season. There’s no timeline for when the league has to decide whether to go ahead with international games in 2021, however.

“We hope to get to be there,” he said. “We’re planning for it. We’ll make that decision whenever we have enough information to do so.”

NFL Players Association President JC Tretter of the Cleveland Browns has suggested there is no need for required minicamps and other workouts at team facilities, given how the NFL got through 2020 without them.

But Goodell mentioned the opportunities younger players have to improve or just to make teams through preseason matches and offseason availabilities. He added the NFL will look into what changes from the pandemic season are worth keeping in a post-COVID-19 world.

"The virtuals are going to be a part of our life for a long time,” he said, because coaches and players were able to remotely work through the playbooks in 2020.

— Goodell said it’s far too early to talk about whether unvaccinated players will be playing next season or if fans will need to be vaccinated to attend games in 2021. The NFL hopes most of society is vaccinated by summer because it’s in the best interest of the country. If the NFL’s protocols must be altered, Goodell said the league will do so.

The NFL is endorsing the use of vaccines for the coronavirus pandemic by hosting 7,500 vaccinated healthcare workers at the Super Bowl on Sunday.

— An investigation into allegations of sexual harassment in the Washington Football Team’s organization will be finished soon. Beth Wilkinson was hired following a report in the Washington Post that 15 female employees team alleged sexual harassment and a poor working culture in the organization. Goodell said team owner Daniel Snyder has begun to make changes and is welcoming the probe.

“They asked for this type of review and recommendations on this,” he said.

— Goodell acknowledged that former 49ers quarterback Colin Kaepernick deserves recognition and appreciation for bringing up issues of social justice and racism. Kaepernick highlighted those issues in the 2016 season when he kneeled during the national anthem to protest racism and police brutality.

Goodell publicly apologized to Kaepernick last year for the league not listening to him enough and taking his concerns more seriously. Kaepernick has been unable to get a contract with any other team after being let go by San Francisco following the 2016 season.

Goodell says the owners and league have worked with players to identify issues in their communities and says he is pleased with the commitment from the players and support from the owners.