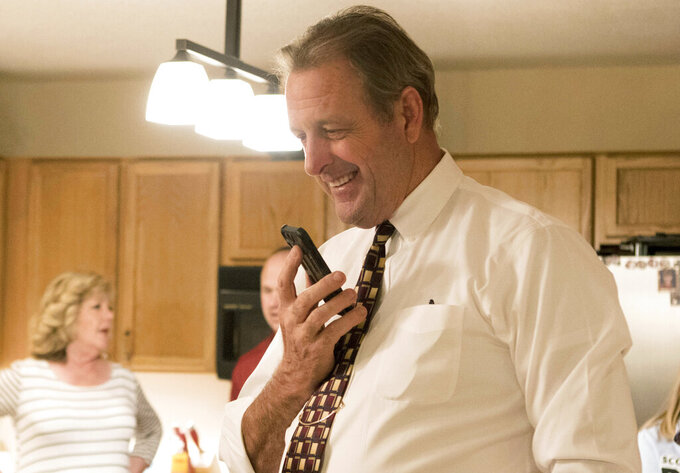 FILE - In this April 4, 2017, file photo, North Las Vegas Mayor John Lee takes a call about election results in Las Vegas. Lee left the Democratic Party and joined the GOP in April 2021 but the gubernatorial candidate is working to assure Republicans that he's one of them. (Heidi Fang/Las Vegas Review-Journal via AP, File)

LAS VEGAS (AP) — North Las Vegas Mayor John Lee left the Democratic Party and joined the GOP less than two months ago. But the gubernatorial candidate is working to assure Republicans that he's one of them.

Lee, who left his party of more than two decades in April, citing a shift toward socialism among Nevada Democrats, told several hundred members of the state's largest Republican club on Tuesday that he is “pro-gun, pro-life, ... pro-jobs, pro-God” and “pro-Republican.”

“Though I had a ‘D’ with my name, I was a Nevadan first," said the former state lawmaker and current mayor of of Nevada’s third-largest city.

Lee, who voted for former Republican President Donald Trump in 2016 and 2020, was asked in a question posed by members of the Nevada Republican Club in Las Vegas how the GOP can be assured that Lee as governor would “follow the Trump agenda."

Lee responded by saying he is “pretty much an independent kind of guy,” who is financially secure enough that he doesn't have to worry about his future or his next job after serving as governor.

When asked to explain later, Lee told the Associated Press in an interview that his answer means that he is going to follow his conscience.

Lee said he originally voted for Trump in 2016 because he was unhappy with Democrats.

“I didn’t like the politics of what was happening in the Democratic Party at the time. I didn’t think that those things were good for my city in North Las Vegas and for southern Nevada,” he said. “It was just the policy.”

He did not offer specifics when asked which policies or politics drove him to make that vote five years ago.

“It was whatever. There was nothing that inspired,” he said.

When asked why he didn’t leave the Democratic Party in 2016, he said, “I’m really not a huge party guy. I just vote for the person, just like I expect people to vote for me if they like me.”

Lee became the first Republican candidate to announce last month he was running for governor in 2022, but his announcement was overshadowed that same day by the news that he’d contracted COVID-19. He said he had not received the vaccine.

Lee said he had waited to get the COVID-19 vaccine, which has been available to those 65 and older since late February, because he didn’t think it had been “approved” by the U.S. Food and Drug Administration.

The FDA issued emergency use authorizations for the Pfizer-BioNTech and Moderna COVID-19 vaccines in December, and the Johnson & Johnson vaccine in February. The FDA can give emergency authorization for medical products to address a public health crisis, in this case the pandemic, as long as the benefits outweigh the risks.

The vaccines that received emergency use authorization are also expected to receive full licensure by the FDA after submitting six months of safety follow-ups. Pfizer-BioNTech and Moderna have started the process of seeking full approval FDA approval for their vaccines.

Lee said he considered himself a “pretty strong guy” and in lieu of getting the vaccine, he planned to instead take precautions like wearing a face mask, but he caught COVID-19 anyway. He said he plans to get the vaccine in the coming months.

Lee is facing Clark County Sheriff Joe Lombardo in the June 2022 Republican primary, which could soon see the addition of former U.S. Sen. Dean Heller. Heller has not returned messages from the AP inquiring about the race but Republican Rep. Mark Amodei said Heller recently told him that he's interested in running for governor. Politico reported last week that Heller has been meeting with GOP governors, party leaders and donors about a run.

Incumbent Democrat Steve Sisolak was elected in 2018, becoming the first Democratic governor of Nevada in two decades. He is running for reelection.