GOP congresswoman-elect from Iowa says she has COVID-19 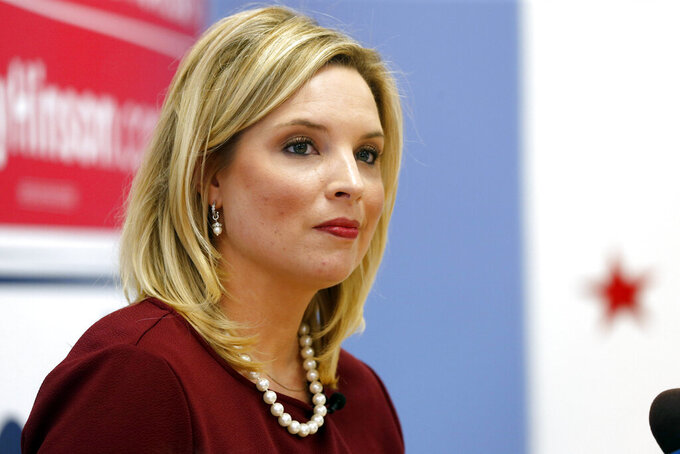 IOWA CITY, Iowa (AP) — A Republican congresswoman-elect who flipped an Iowa seat in last week's election said Thursday that she tested positive for the coronavirus.

Her campaign said in a statement that Hinson, 37, feels great and is quarantining with her family at her home in Marion. Hinson plans to speak with reporters on a conference call Friday and will attend an orientation for incoming members of Congress virtually, her campaign said.

Hinson unseated first-term Democratic Rep. Abby Finkenauer in Iowa's 1st Congressional District, which includes Cedar Rapids, Dubuque, Waterloo and other cities and towns in the state's northeast. Hinson received 51.3% of the vote, defeating Finkenauer by about 11,000 votes out of 413,000 cast.

The district is one of the nation's worst coronavirus hot spots, with rapid community spread happening in Cedar Rapids and other cities and a huge outbreak at a state prison in Anamosa.

Campaign spokeswoman Annie Topp declined to comment when asked how Hinson, a married mother of two young children, may have contracted the virus. Referring to a brief statement, she said, “This is all the information we intend to make public.”

Public health experts and Democrats have warned that Republican events attended by Hinson and other candidates during the final weeks of the campaign may have fueled the spread of the virus.

Hinson was often — but not always — seen wearing masks at those events when she was not speaking.

They included an Oct. 26 event at an indoor Cedar Rapids venue with Donald Trump Jr., where hundreds of mostly mask-less supporters listened as the president's son said the COVID-19 death rate was “almost nothing.”

President Trump also held a large outdoor rally in Dubuque on Nov. 1, where Hinson briefly joined him and others on the stage. “Iowa is Trump country!” she said.

This story has been updated to correct Abby Finkenauer's first name. She had been erroneously referred to as Ashley Finkenauer.