GOP efforts to tighten voting laws gets underway in Texas 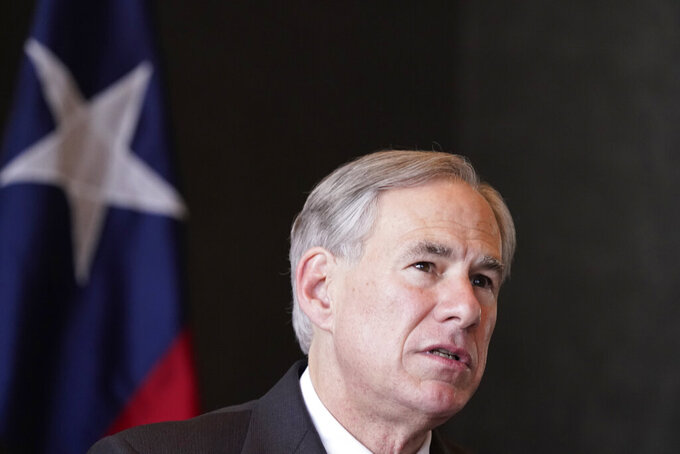 AUSTIN, Texas (AP) — Republican efforts to tighten voting restrictions across the U.S. are getting underway in Texas, where state GOP leaders helped push unsupported claims of irregularities in the last year's presidential election.

Republican Gov. Greg Abbott's unveiling this week of sweeping proposed changes to Texas elections puts the state in some ways behind many parts of the country. Legislative voting battles are well under way in Georgia, and Iowa passed a Republican-backed bill this month that makes it harder to vote early.

Texas already has some of the toughest voting laws in the country — including stringent I.D. requirements — and the rush for more crackdowns worries voting rights groups and Democrats whose ability to block new measures in the Capitol are limited.

New legislation in Texas takes particular aim at Harris County, around Houston, where the state went to court last year over efforts to expand mail-in voting and ballot access during the pandemic. One proposal would require eligible voters to provide a written doctor’s note certifying a disability to apply for an absentee ballot.

“The last time we had this much paperwork we called it a poll tax,” said Isabel Longoria, Harris County’s elections administrator. “This idea that bureaucracy is somehow going to save us is not based in reality.”

The bills are expected to begin advancing this month, including through a House committee chaired by Republican state Rep. Briscoe Cain, who flew to Pennsylvania last year to help former President Donald Trump's campaign investigate false claims of voting irregularities.

At a news conference Monday, Abbott said “election fraud does occur” in Texas but did not name any examples from the November election. Many Republicans have said the new bills are meant to shore up public confidence after Trump and his GOP allies, without evidence, criticized the election as fraudulent.

“Election officials should be working to stop potential mail ballot fraud, not facilitate it,” Abbott said.

Other proposals would create deadlines and financial penalties for local election administrators on voter roll maintenance. Remi Garza, the election administrator in Cameron County, said he is concerned with how differently these bills will affect counties with different population sizes, resources and staffing levels when it comes to maintaining voter rolls.

Garza said though it is good to create maintenance requirements, the state may “inadvertently create some challenges for us."

Texas was one of only a handful of states that did not expand mail-in voting eligibility during the pandemic.

Even before more statehouses got back to to work in January, the Brennan Center for Justice, a public policy institute, identified more than 100 bills in 28 states meant to restrict voting access.

Trump won Texas by fewer than 6 percentage points — the thinnest margin of victory for a GOP nominee in American's biggest red state in decades.

Myrna Perez, director of the Brennan Center’s Voting Rights and Elections Program, called the bills in Texas an attempt of the “the good ol' boy power structure in Texas” to stay in power. She said politicians who have claimed election fraud exists have not questioned the legitimacy of the elections in which they won.

“Whose elections can we not trust?" Perez said.