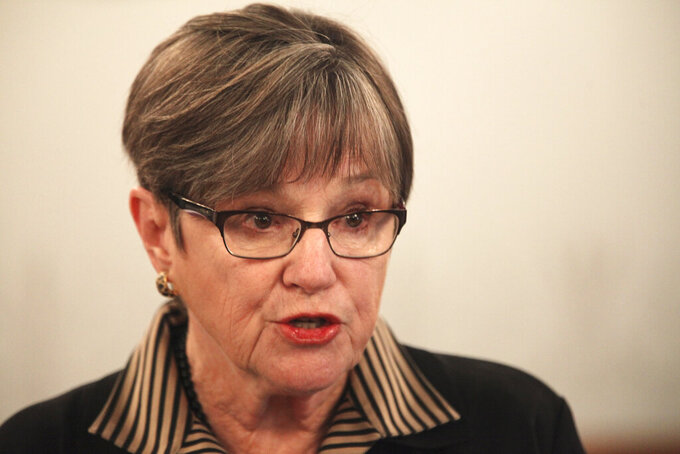 TOPEKA, Kan. (AP) — Kansas Attorney General Derek Schmidt launched his campaign for governor on Tuesday after weeks of heightened visibility for the three-term Republican amid the GOP-controlled Legislature's debates over Democratic Gov. Laura Kelly's handling of the coronavirus pandemic.

Schmidt, 53, is the first major Republican to formally enter the race against Kelly in 2022, though former GOP Gov. Jeff Colyer on Friday signaled plans to run by naming a granddaughter of President Dwight Eisenhower as the treasurer for “our campaign.”

Top Republican lawmakers said they haven't intentionally been trying to boost Schmidt's visibility by pushing legislation that would give the attorney general a check on the governor's power during future emergencies. Schmidt has clashed with Kelly during the pandemic, including by objecting to her unsuccessful attempt last spring to restrict indoor religious services.

Schmidt also has increased his political profile by joining battles over the 2020 election, siding with fellow Republicans who have spread former President Donald Trump's unfounded allegations of voter fraud even though he acknowledges the legitimacy Democrat Joe Biden's victory.

“Stability, practicality, less-is-more all ought to be guiding principles," he said in a pre-announcement interview. “Most Kansans, generally, prefer instinctively conservative leadership.”

Many Republicans are still smarting over Kelly's 2018 defeat of polarizing conservative Kris Kobach after Kobach, who was Kansas' secretary of state at the time, narrowly defeated Colyer in the GOP primary.

Republicans have criticized Kelly for months over her pandemic response, including a five-week statewide stay-at-home order, the closure of K-12 school buildings last spring and her attempts to impose mask mandates. They also have highlighted ongoing problems with the state's unemployment system.

“No. 1, Republicans want to beat Laura Kelly,” said former Kansas Senate President Susan Wagle, a Wichita Republican. “And No. 2, they want an authentic, reliable conservative in that seat.”

Kelly has professed indifference to the emerging race. Her campaign issued a statement Friday saying that she's not focused "on an election that’s two years away.”

Both Schmidt and Colyer are running as limited-government conservatives who oppose abortion, limits on gun rights and an expansion of the state's Medicaid health coverage for the needy. They'll also play to Trump's supporters in a state Trump twice carried comfortably. Both come across as affable and usually low key.

But Colyer immediately attacked Schmidt for "carrying water for the most liberal elements of the Kansas Republican Party,” citing Schmidt's time as a staffer for former U.S. Sens. Nancy Kassebaum Baker, of Kansas, and Chuck Hagel, of Nebraska. Kassebaum endorsed Kelly and the Democrat in last year's U.S. Senate race in Kansas, and Hagel later served as Democratic President Barack Obama's defense secretary.

Colyer was governor for a little less than a year, starting when GOP Gov. Sam Brownback resigned in January 2018 for an ambassador's post, elevating Colyer after seven years as lieutenant governor.

Brownback left the governor's office deeply unpopular with voters because of persistent budget shortfalls that followed his notorious 2012-13 experiment in slashing income taxes. Legislators repealed most of the tax cuts in 2017, and Kelly ran largely against Brownback's legacy in 2018.

While Schmidt argued that Kansas needs a low-tax and low-regulation environment that fosters business growth, he said wouldn't bring back the Brownback era because, “The math has to work."

“I don't think there's any need to experiment with novel ideas,” he said. “I'm not particularly driven by abstract ideas.”

Senate Majority Leader Gene Suellentrop, another Wichita Republican, said Republicans will worry about needing to get past the “Brownback-Colyer era" but also about a perception on the right that Schmidt has been a "soft” conservative in the past.

“Those two issues are going to clash,” he said.

University of Kansas political scientist Patrick Miller sees the main difference between Schmidt and seemingly more Trump-like figures such as Kobach as their approach — not being "a bomb thrower.”

“Does he have the substance? Sure, in many ways,” Miller said.

Meanwhile, measures approved by the state House and Senate would require a review by the attorney general before a governor could issue executive orders during a state of emergency. House Majority Leader Dan Hawkins, also a Wichita Republican, sees those measures as an extension of GOP leaders' regular consultations with Schmidt, not a push to help him politically. Hawkins supported Colyer in 2018.

“Either one of them wins, I'm OK,” Hawkins said.

Schmidt was a Kansas Senate majority leader in 2010 when he made his first run for attorney general and unseated a Democrat after promising to push back against the Affordable Care Act championed by Obama. Schmidt's participation in lawsuits with other GOP attorneys general have been a regular feature of his tenure.

Schmidt brought Kansas in December into an unsuccessful effort by Texas' GOP attorney general to overturn election results in four battleground states won by Biden. Schmidt's announcement of it came after Colyer called on social media for him to do it.

Schmidt joined other attorneys general Friday in writing to congressional leaders protesting Democratic voting rights legislation approved by the U.S. House, suggesting it would unconstitutionally infringe on states' right to run elections. He argued the measure would exacerbate problems arising after “the 2020 general elections generated mass confusion and distrust."

Pressed about the false voter-fraud narrative from Trump and other Republicans, Schmidt said he is leaving “factual disputes” to others and trying to “insist that states all play by the same rules to the extent that they apply to all of us.”