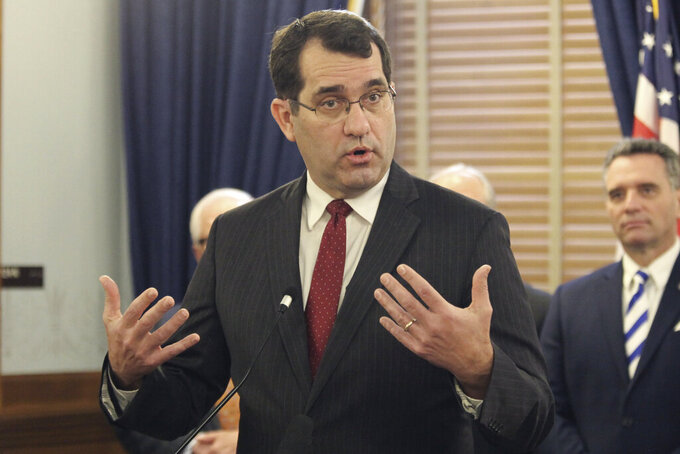 In this photo from Tuesday, Feb. 23, 2021, Kansas Attorney General Derek Schmidt answers questions at a news conference with Republican legislative leaders, at the Statehouse in Topeka, Kan. Legislators in 2020 imposed special rules for tracing the contacts of people exposed to COVID-19 to protect their privacy at the GOP attorney general's urging, and they're now considering making them permanent. (AP Photo/John Hanna)

TOPEKA, Kan. (AP) — Republican lawmakers argue that a pandemic justifies special rules in Kansas for protecting the privacy of people exposed to COVID-19 and on Wednesday advanced a proposal to preserve those rules over public health groups' objections.

The Senate approved, 26-14, a bill that would make contact tracing rules for the coronavirus permanent, setting COVID-19 apart from other infectious diseases, such as syphilis or hepatitis. The GOP-controlled Legislature enacted the special rules at Attorney General Derek Schmidt's urging, but they are set to expire May 1.

Key provisions in the rules prevent people exposed to the COVID-19 virus from being forced to disclose their close contacts and say people can’t face criminal charges or civil lawsuits for refusing. The Senate's vote sends the measure to the House.

Schmidt, a Republican, argued that the special rules are necessary to protect people's privacy. Senate Judiciary Chair Kellie Warren, a Leawood Republican, argued during a debate Tuesday that public health officials are collecting massive amounts of data because COVID-19 is so widespread, and contact tracing for it represents a bigger threat to privacy than it does with other diseases.

Schmidt said in an interview Wednesday that a pandemic of such a “widespread nature” in a digital age raised compelling questions about protecting the privacy of people's data.

"In the important rush to deal with public health issues, privacy concerns, data protection concerns and other important issues are sometimes given a back seat, and this law ensures that, that's not the case,” he said.

Public health officials, including Norman, have said the rules make it harder to track the contacts of people infected with or exposed to the COVID-19 virus, hindering efforts to learn where cases originated.

Republicans have criticized Kelly's handling of the pandemic, and that's also led to questioning of Norman's actions by GOP conservatives.

Schmidt also is running for governor in 2022, when Kelly is seeking a second term. None of the Senate's 11 Democrats supported the bill.

“We have been doing contact tracing in our state for quite some time," said Senate Minority Leader Dinah Sykes, a Lenexa Democrat. "We have not had concerns.”

Two public health associations told the Senate committee that it makes no sense to have different rules for COVID-19, particularly when it's likely eventually to be managed with vaccines like other infectious diseases.

“Emergency response is complicated enough,” said Brandon Skidmore, president of the Kansas Public Health Association, told the Judiciary Committee in written testimony. “Creating rules and systems unique to one disease/virus creates confusion for those tasked with implementing a response."

But Warren cited the “unique set of circumstances” in the coronavirus pandemic. She said an outbreak of syphilis, for example, “is not affecting such a big population."