GOP seeks to convince vaccine skeptics within its own ranks 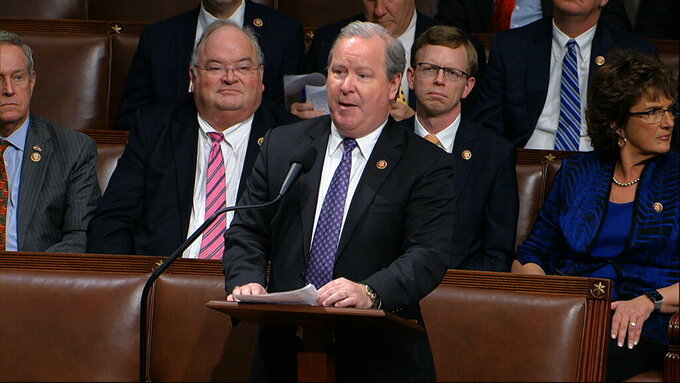 FILE - In this Dec. 18, 2019, file photo, Rep. Larry Bucshon, R-Ind., speaks on the House floor at the Capitol in Washington. With vaccination rates lagging in red states, Republican leaders have begun stepping up efforts to persuade their supporters to get the shot, at times combating misinformation spread by some of their own. (House Television via AP)

WASHINGTON (AP) — When a group of Republican doctors in Congress released a video selling the safety of the coronavirus vaccine, their message wasn't explicitly aimed at their conservative constituents, but nonetheless had a clear political bent.

Getting the shot is the best way to “end the government's restrictions on our freedoms," Rep. Larry Bucshon, an Indiana Republican and heart surgeon who donned a white lab coat and stethoscope when he spoke into the camera.

The public service announcement was the latest effort from GOP leaders to shrink the vaccination gap between their party and Democrats. With vaccination rates lagging in red states, Republican leaders have stepped up efforts to persuade their supporters to get the shot, at times combating misinformation spread by some of their own.

“Medicine and science and illness, that should not be political,” said Dr. Brad Wenstrup, a Republican congressman from Ohio and a podiatrist who has personally administered coronavirus vaccine shots both as an Army Reserve officer and as an ordinary doctor. “But it was an election year and it really was.”

Wenstrup said both parties helped foment some skepticism, though increasingly vocal moves by other Republicans amount to acknowledgement that GOP vaccine hesitancy is a growing public health problem — and potentially a political one.

"Things could easily spiral quickly if we don’t solve this red-state-blue-state issue," said Kavita Patel, a physician and health policy expert who worked in the Obama administration.

Patel said life could return to normal in certain parts of the country while the pandemic continues to rage elsewhere — potentially even disrupting in-person voting in primaries ahead of next year’s midterm elections.

“We could be sitting here in the winter-fall with an entirely different, scary version of the pandemic,” she said. “One driven by a combination of variants and people who didn’t want to get vaccinated.”

It's easy to spot potential trouble spots now — and the political pattern.

Mississippi has the nation’s lowest vaccination rate, with less than 31% of its population receiving at least one anti-coronavirus shot. And the four states that proceed it in national rankings, Alabama, Louisiana, Idaho and Wyoming, according to an Associated Press analysis of Centers for Disease Control and Prevention data. They all vote reliably Republican in presidential races.

By contrast, the five states with the highest vaccination rates backed Democrat Joe Biden in November. New Hampshire leads the nation with 60% of its population receiving at least one dose, followed by Massachusetts, Vermont and Connecticut. The fifth highest vaccination rate state, Maine, awarded three of its electoral votes to Biden and one to former President Donald Trump.

Republicans are more likely than Democrats to say they definitely or probably won’t get vaccinated, 44% versus 17%, according to a poll released in February from The Associated Press-NORC Center for Public Affairs.

Hence this week's video, where Texas Republican Rep. Michael Burgess, an obstetrician who reassured viewers that rather than rush the vaccine out in an unsafe fashion, federal officials “cut bureaucratic red tape, not corners. And they got the job done in record time.” The video also credited the Trump administration's Operation Warp Speed with bringing the vaccine so quickly.

Amid polling showing that Republican men were among the most likely vaccine holdouts, Senate Minority Leader Mitch McConnell said earlier this month, "I can say as a Republican man, as soon as it was my turn, I took the vaccine." Even Trump, who was vaccinated privately while in office, suggested on Fox News Channel that he'd be willing to record a video urging vaccination.

Doing so would be an about-face for Trump, who as president long said he'd be willing to take a vaccine but also relished politicizing the pandemic. He suggested that lockdowns recommended by his administration's experts were governmental overreach, mocked then-candidate Biden for wearing a mask in public too frequently and used racist terms like “China virus.”

Not all Republican lawmakers feel the same sense of urgency to raise the vaccination rate, meanwhile.

“The science tells us that vaccines are 95% effective. So if you have a vaccine, quite honestly, what do you care if your neighbor has one or not?" Wisconsin Republican Sen. Ron Johnson said during a recent interview with a conservative radio host. "I mean, what is it to you?”

Between 70% and 85% of the population would need to be immune before the coronavirus is effectively contained, experts believe.

The GOP's top leaders may also have political incentives to appeal to those resistant to getting the shot. Joe Brettell, a GOP strategist in deep red Texas, said he expects Republican governors looking to raise their profiles will seize on vaccine-related debates, such as opposing “vaccine passports” that may eventually be required for travel, even as they implore their state's people to get immunized.

“I think that's where smart governors are going to start asserting themselves,” he said, noting that some already have.

Ideology also isn't the only factor in vaccine hesitancy. Experts are also tracking a generational gap, with younger Americans believing that, even if they get the virus, it is unlikely to seriously sicken or kill them. Republican West Virginia Gov. Jim Justice even is offering $100 saving bonds to residents ages 16 to 35 who get or have gotten the shot — trying to reverse a trend that saw his conservative state become an early leader in vaccination rates only to have it slow since.

Republican pollster Frank Luntz, who has been researching how best to convince vaccine skeptics, says he believes the effort is most effective when it avoids politics, with people hearing about the benefits of immunization from doctors, not politicians. He said many skeptics are persuaded to get the shot because it benefits their friends and family, not just themselves.

“If it’s politicized, they will not reach herd immunity,” said Luntz, who said that means giving credit to both sides, praising the Trump administration for Operation Warp Speed and the Biden White House’s efficient and effective distribution of vaccines.

Luntz argued that public health officials should be targeting Republicans in much the same ways that national campaigns sought to win over holdouts among Black Americans and other minority groups.

“It’s actually very tragic that appealing to Black Americans about the importance of staying safe is heroic,” Luntz said. "But appealing to Republicans, who have their own concerns, is considered political.”

The Biden administration is working with community health officials, promoting the vaccine to skeptics through doctors and experts who don’t have the celebrity buzz but may be seen as more trustworthy. Biden suggested that might be a better way to reach “Make America Great Again” diehard Trump supporters more than a video from the former president himself.

Wenstrup said vaccine reluctance can be bipartisan — but the opposite is also true. He told of helping vaccinate older adults in Ohio when one woman recognized his name and asked for a selfie.

“She said, ‘I probably don’t agree with you on one thing politically, but I thank you for your service and for being here today, giving the shot,’" Wenstrup recalled. “I said, ‘And that's America, ma'am.'”