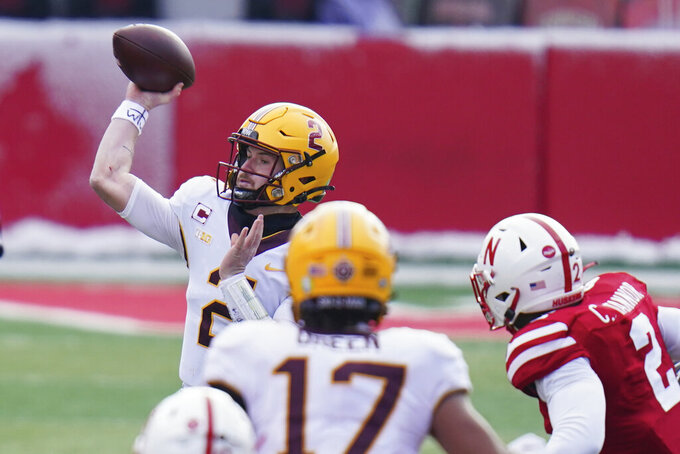 Ibrahim scored on fourth-and-goal from the 1 to give Minnesota a 10-point lead early in the fourth quarter after Adrian Martinez fumbled at the Nebraska 39.

Connor Culp's 30-yard field goal cut it to 24-17 with 4:42 left. The Gophers then called on Ibrahim to finish off the game, having him carry six straight times for 59 yards before they went into victory formation at the Nebraska 6.

“Through the stuff we've had to go through, we've become closer and our bond has grown,” quarterback Tanner Morgan said. “Guys want to do things for each other at an even higher level than before. It's a lot of fun being around the guys. Having fun was something we talked a lot about this week. Having fun playing the game, having fun with each other. Our guys definitely did that.”

The Gophers (3-3, 3-3 Big Ten) had their last two games canceled because of a COVID-19 outbreak on the team, and most of their missing 33 players were in the conference's 21-day return to play protocol.

It also was Minnesota's first game without star wide receiver Rashod Bateman, who opted out Nov. 25, and the Gophers were down to four defensive linemen, two tight ends and they also were depleted on the offensive line.

Minnesota coach P.J. Fleck gave part of the credit for the win to the team's medical staff, which helped manage the fallout from the virus.

“I do believe unless you're in a college football or college basketball locker room right now, I don't think anybody has any idea how hard this is,” Fleck said. "Constantly changing roster, roster management, injuries on top of it, opt-outs, players testing positive for COVID two days before a game.

“We don't have enough players to put a scout team out there (at practice). We had 22 days off. There's a mental, physical and emotional toll this year has taken on athletes.”

“I'm hurting for the kids,” Huskers coach Scott Frost said. "I love the team. I thought the energy and preparation were really good. We just didn’t play very well.”

The Gophers, who came to Lincoln as 10-point underdogs, took a 17-14 lead into the final quarter. They had gone ahead late in the first half after a targeting penalty on cornerback Cam Taylor-Britt kept alive a 75-yard scoring drive that started with Cam Wiley sprinting 61 yards down the sideline.

Taylor-Britt went helmet-to-helmet with Morgan while stopping him short on a third-down run. That set up Minnesota inside the 10, and Morgan threw to tight end Brevyn Spann-Ford in the back of the end zone for a 4-yard touchdown.

The Gophers opened the scoring after Tyler Nubin intercepted a tipped pass at the Huskers' 35 in the middle of the first quarter. On fourth-and-1, Seth Green replaced Morgan and lined up in wildcat formation. He stepped to the side as a direct snap went to Ibrahim, who broke through the middle for a 26-yard touchdown.

Luke McCaffrey threw the interception two plays after replacing starter Adrian Martinez, who appeared to get his left (non-throwing) hand dinged. Martinez returned for the next series.

Nebraska managed only 1.9 yards per play on its first three possessions against the statistically worst defense in the Big Ten.

“We just wanted our players to play with incredible effort and for each other, and I thought they did that,” Fleck said. “They gave us everything they had.”

Minnesota: This ranks as one of the guttiest wins in recent memory for a team ravaged by the virus. Ibrahim has been the bell cow for the Gophers, but they discovered young running back talent in Wiley and at receiver in Daniel Jackson to fill the void created by Bateman.

Nebraska: Whatever can go wrong for the Huskers does. The two turnovers were costly, and the defense lost Taylor-Britt to a targeting call for the second time this season and playmaking linebacker Luke Reimer to injury in the first quarter.

It was the first December game in Memorial Stadium history. The weather fit the time of year. About 3 inches of snow fell overnight and was piled behind the sidelines. The temperature was 32 degrees with a light north breeze at kickoff. The stadium opened in 1923.

Both teams are to play Dec. 19 against opponents to be announced by the Big Ten on Sunday.