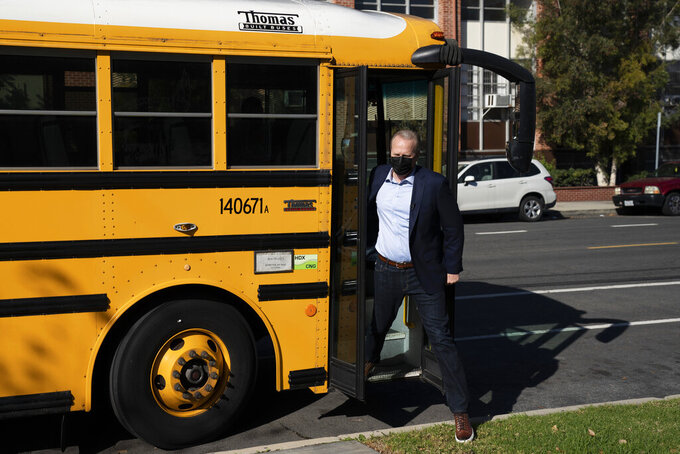 Former San Diego Mayor Kevin Faulconer gets off a school bus to attend a news conference in Tuesday, Feb. 2, 2021, in the San Pedro section of Los Angeles. Faulconer announced Monday he is entering the race for California governor, the first major Republican to formally step into the contest while a potential recall election aimed at Democratic Gov. Gavin Newsom moves closer to qualifying for the ballot this year. (AP Photo/Jae C. Hong)

LOS ANGELES (AP) — Republican Kevin Faulconer formally rolled out his campaign for California governor Tuesday with a blistering attack on Democratic Gov. Gavin Newsom paired with a symbolic flourish: He arrived in a yellow school bus to underscore the frustration of parents whose kids remain locked out of classrooms because of the pandemic.

Appearing with a small group of supporters outside a shuttered public school in Los Angeles, the former San Diego mayor said California had been transformed under Newsom from a lodestar for opportunity to "the land of broken promises."

He described a government dominated by Democrats in Sacramento as disconnected from the struggles of workaday Californians, and said while millions try to figure out daycare or find a new job, the governor “feels none of the consequences."

He faulted Newsom for zig-zag leadership during the outbreak that led to millions of lost jobs and a bumpy vaccine rollout, stranding public school children at home while Newsom's own youngsters attend private, in-person classes, and a massive unemployment benefits scandal.

He also chided the governor for attending a dinner with friends and lobbyists at the opulent French Laundry restaurant in Napa Valley after telling residents to spurn social gatherings and stay at home for safety.

The centrist former mayor enters the race with urgent challenges. He needs to quickly become better known in the state of 40 million people, raise tens of millions of dollars for the campaign and figure out a way to break the GOP's miserable track record in big races. The party hasn't won a statewide contest in California since 2006.

Faulconer’s announcement came as supporters of a possible recall that could oust Newsom from office continue gathering the nearly 1.5 million petition signatures needed to qualify the proposal for the ballot this year.

They have until mid-March to hit the required threshold, and organizers say they have over 1.3 million signatures so far. Faulconer said he will run in the recall if it qualifies or, if it doesn't, challenge Newsom when he is expected to seek a second term in 2022.

A Republican field is beginning to take shape.

Newsom’s 2018 rival, businessman John Cox, has said he is a likely candidate, whether in a recall or next year. Technology investor Chamath Palihapitiya is considering a run and another name mentioned in Republican circles is ex-President Donald Trump’s former acting director of national intelligence, Richard Grenell, who lives in California.

Newsom’s campaign said the governor would remain focused on distributing COVID-19 vaccine and providing relief for families and small businesses while Republicans jockey for political advantage.

“Trying to exploit a global pandemic to advance a political career exposes his craven ambition,” Newsom’s chief strategist, Dan Newman, said about Faulconer in a statement.

Any Republican would face obstacles in a statewide race in California, where registered Democrats outnumber Republicans by nearly 2-to-1 and Democrats hold every statewide office and dominate the Legislature and congressional delegation.

The race is unfolding with the Republican Party in disarray after Trump’s defeat in November and the insurrection at the U.S. Capitol. Also, the politically moderate Faulconer has had friction with some conservatives in his own party, including on immigration.

Asked about the GOP's history of election losses in the state, Faulconer said angry voters were ready for a different path forward.

“People are looking for a change in Sacramento,” he said, noting that he twice was elected mayor in Democratic-leaning San Diego. “One-party rule is not serving our state well.”

Faulconer's sketched his “comeback” platform in broad strokes, without providing specifics or financial details. When asked if he would cut taxes, he said first he would concentrate on not raising them. Public schools should be reopened immediately but safely. Homelessness needs to be decreased. The unemployment benefits system needs to be improved to get checks to the jobless, while guarding against fraud that has run into billions of dollars in the state.

He also attacked decisions to close outdoor dining at restaurants, with officials failing to provide the science to support it.

Newsom, a former San Francisco mayor, was elected in a 2018 landslide in the heavily Democratic state but has entered a difficult period, with criticism coming from Democrats and Republicans.

Last spring, Newsom received wide praise for his aggressive approach to the coronavirus outbreak, when he issued the nation’s first statewide stay-at-home order. But there has been growing public unrest over subsequent health orders that closed schools and businesses.

Faulconer's ties to Trump, who is widely unpopular in the state, are likely to complicate his campaign. Democrats already have labeled him a Trump acolyte.

Faulconer didn’t support Trump in 2016 but in 2020 changed course and backed the president's reelection, calling Trump the clear choice over Joe Biden for “getting our economic situation back on track.”

Asked about Trump, Faulconer responded indirectly. He emphasized he has a history of working with Democrats and independents in his city.