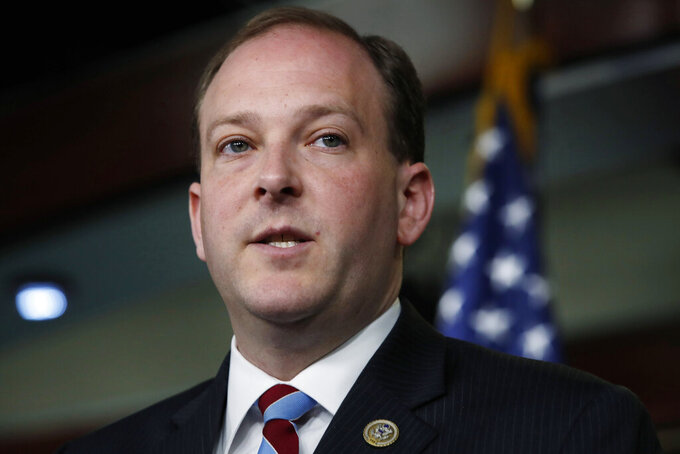 FILE — In this May 22, 2018 file photo, Rep. Lee Zeldin, R-N.Y., speaks during a news conference, on Capitol Hill in Washington. Zeldin announced his candidacy for governor of New York on Thursday, April 8, 2021, with an attack on incumbent Democrat Andrew Cuomo, the subject of investigations over sexual harassment allegations and COVID-19 deaths among nursing home residents. (AP Photo/Jacquelyn Martin, File)

“The bottom line is this; to save New York, Andrew Cuomo’s gotta go," Zeldin, a fourth-term Congress member from Long Island, said in a news release.

Zeldin, 41, promised to bring “the kind of relentless, fighting spirit towards helping to save our state that Andrew Cuomo only reserves for multimillion-dollar self-congratulatory book deals, cover-ups, abuse and self-dealing.”

Cuomo, who has not announced a run for a fourth term as governor in 2022, is facing allegations that he sexually harassed or behaved inappropriately toward several women. He has resisted calls for his resignation over the harassment claims and his administration's handling of COVID-19 cases in nursing homes during the height of the pandemic last year.

Other Republicans who have said they are considering seeking the Republican nomination for governor include Andrew Giuiliani, the son of former New York City Mayor Rudy Giuliani and a former aide in the administration of former President Donald Trump.

Former Westchester County Executive Rob Astorino, who lost to Cuomo in the 2014 governor's race, has told donors he is considering entering the race for the 2022 Republican nomination, as well.

Zeldin, a loyal ally to Trump during his time in office, did not mention the former president in his statement announcing his gubernatorial run or in an appearance earlier Thursday on Fox News' “Fox and Friends.”

Zeldin told the Fox hosts, “I am going to win this race. I’m all in, we’re all in, losing is not an option and we have to turn things around.”

Zeldin is an Army veteran who has represented New York’s 1st Congressional District since 2015. He served two terms in the state Senate before that.

Any Republican would face an uphill battle winning the governor's office in New York, where registered Democrats outnumber registered Republicans by more than 2 to 1. The state's last Republican governor was George Pataki, who served from 1995 to 2006.

Representatives for Zeldin's campaign did not respond to a question about whether Zeldin plans to run for reelection to his House seat. A spokesperson for the state Board of Elections said that if Zeldin were to receive the Republican nomination for governor, he would have to decide which office to pursue in the November 2022 general election.