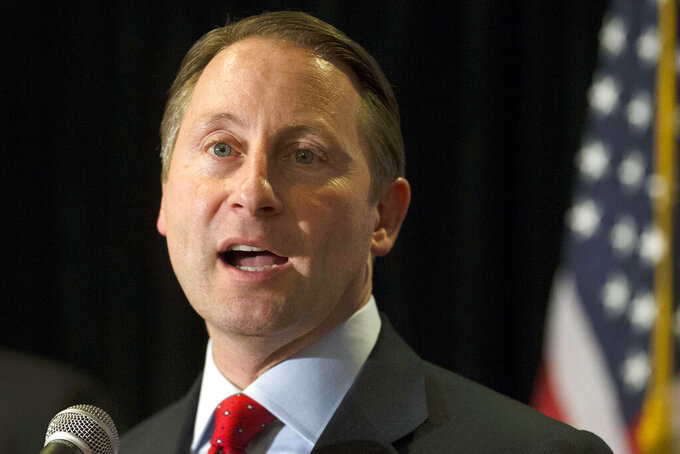 FILE — In this Nov. 4, 2014 file photo, then New York Republican gubernatorial candidate Rob Astorino gives his concession speech during his election night rally, in White Plains, N.Y. Astorino said Tuesday, May 11, 2021, he'll run for governor in 2022 in what would be his second bid to unseat Gov. Andrew Cuomo.(AP Photo/John Minchillo, File)

Astorino, a Republican former radio industry professional and two-term Westchester County executive, promised to release an agenda to address New York's steep job loss stemming from the COVID-19 pandemic on top of government corruption and the state's high taxes and cost of living.

“The state is hemorrhaging people, jobs and hope," Astorino, 54, said in a news release. “You don’t just offer a band-aid approach in this scenario. You have to be honest and you have to be bold, and I will be. I’ve done it before.”

U.S. Rep. Lee Zeldin of Long Island announced last month that he is seeking the Republican nomination for governor.

Astorino was the Republican gubernatorial candidate in 2014, losing to Cuomo by 54% to 40%, with Green Party candidate Howie Hawkins winning 5% of the vote.

Cuomo, who is now in his third term, won with nearly two-thirds of the vote in 2018.

The Democrat, who has not announced a 2022 reelection campaign, is facing investigations by the state attorney general's office and the Legislature's judiciary committee over sexual misconduct allegations. Those investigators are also probing whether Cuomo illegally used state employees and resources to write and promote his COVID-19 pandemic leadership book and to help get his family members priority access to COVID-19 testing last spring.

Federal prosecutors are also scrutinizing how Cuomo's administration handled data on COVID-19 outbreaks at nursing homes. The state refused to release data on deaths of nursing home residents at hospitals for months despite requests from lawmakers and the media dating back to March 2020.