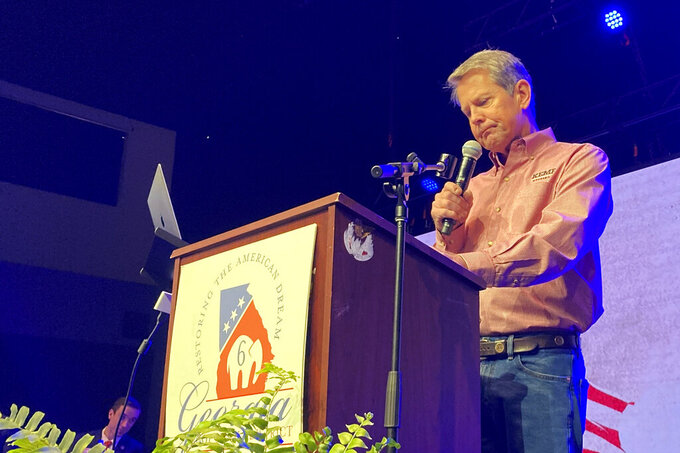 ATLANTA (AP) — Georgia Gov. Brian Kemp declared Friday that public schools no longer have his permission to require masks for coronavirus protection, though his executive order fell short of banning such mandates outright.

The Republican governor’s written order came two days after Kemp gave a preview in a Fox News Channel interview Wednesday, declaring: “The time for mandates is over.”

“We’re not going to have a mask mandate for our kids,” Kemp said. “Our teachers have had the ability to get vaccinated. It certainly doesn’t keep anyone from wearing a mask.”

Instead, Kemp's order says his COVID-19 emergency declaration “does not include the authority for local school districts to rely on the Public Health State of Emergency as a basis for requiring students or workers to wear a face covering" on school campuses.

In other words, Georgia school districts can no longer claim their authority to require masks comes from the governor.

It’s unclear how many Georgia districts ever required employees and students to wear masks. While a number of metro Atlanta school districts enforced the requirement, many districts in outer suburbs and rural areas only strongly recommended masks. A number of districts, including Cobb County and Fulton County, have loosened mask requirements in recent weeks.

“He does not have broad-reaching, unilateral powers in the Georgia constitution to usurp the power of local school boards,” Kreis said. “I think what he’s done here is basically removed himself from the calculus, punted this as a political issue back to the local school boards and said, `I don’t want you to do this and you can’t use me as your justification.'"

Jason Esteves, chairman of the Atlanta school board and the state Democratic Party treasurer, said his district will continue requiring masks when 11,000 students return for summer classes next week.

He said the wording of Kemp's order clearly shows the limits of his power over local school systems.

“We actually amended the dress code to require masks," Esteves said. "And we did it without consideration of what the governor or the political winds told us to do at the time.”

Kemp spokesman Cody Hall said the governor's prior emergency orders during the pandemic explicitly granted school systems the authority to require masks if they chose to. Kemp's new order rescinds that power at the end of May.

Hall declined to comment on whether the state would try to stop school systems that want to keep mask mandates in place. Many have already ended classes for summer break.

If any school boards choose to continue mask mandates, Hall said, “that's absolutely something they'll be hearing from their public, staff, parents and students about.”

Mask mandates have been unpopular with some parents, leading to angry scenes at school board meetings and even lawsuits. Those who oppose them have largely been white and Republican.

Children younger than 12 are not eligible to receive any coronavirus vaccine, meaning typically no students are vaccinated in fifth grade and lower. Vaccination progress thus far has been slow among students 12 and older who are eligible.

Although 7.4 million doses of COVID-19 vaccine overall have been administered in Georgia, it continues to be among the 10 lowest states for vaccination rates nationwide, according to data from the Centers for Disease Control and Prevention.

Daily coronavirus infections in Georgia averaged 397 for the seven-day period ending Friday, their lowest level since late March 2020. Deaths are still inching up in the state, which passed 18,000 confirmed virus deaths Thursday.

Kemp is running for reelection in 2022 and has been taking steps to shore up support among Republican voters still restive over claims that Kemp didn’t do enough to overturn President Joe Biden’s election victory in Georgia. In the past 10 days, he has also issued an order that says public agencies in Georgia can’t require people to prove they have been vaccinated against COVID-19 and sent a letter to the state Board of Education urging members to ban public schools from certain teachings about race.