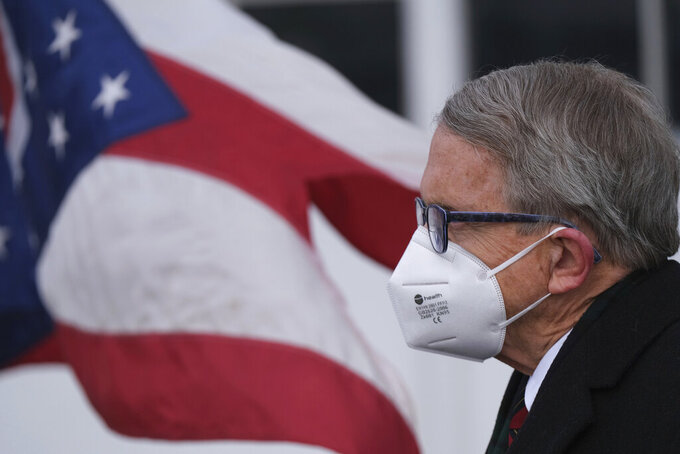 FILE - This Wednesday, Nov. 18, 2020 file photo shows Ohio Gov. Mike DeWine looking on during a news conference at Toledo Express Airport in Swanton, Ohio. A year after the first coronavirus shutdowns, many U.S. states and cities are still struggling with a silent side effect: Public records have become harder to get. After months of repeated AP inquiries, DeWine's office on March 3, 2021, released just two documents from last spring — one from a hospital association proposing criteria for resuming elective procedures. (J.D. Pooley/Sentinel-Tribune via AP, File)

As states prepared to reopen their economies following coronavirus shutdowns last spring, The Associated Press asked governors across the U.S. for records that could shed light on how businesses and health officials influenced their decisions.

Nine months later, after several more COVID-19 surges and shutdowns, the AP still has not received records from about 20 states. Some outright denied the requests or sought payments the AP declined to make. Others have not responded, or said they still need more time.

Public records have become harder to get since the world was upended by the pandemic a year ago. Governors, legislatures and local officials have suspended or ignored laws setting deadlines to respond to records requests. They cited obstacles for staffers who are working at home or are overwhelmed with crisis management.

The result is that information that once took a few days or weeks to obtain now often takes months — depriving the public of timely facts about decisions their leaders are making.

“The pandemic rages on, but investigative journalism doesn’t halt. The public’s right to know doesn’t cease to exist,” said Gunita Singh, a legal fellow at the Reporters Committee for Freedom of the Press, which has tracked nationwide delays in responding to public records requests.

“Having these unnecessary measures in place that hinder open government sets a terrible precedent,” Singh said.

U.S. states and local governments are far from alone in their deferrals and delays. Dozens of countries suspended or altered their right-to-information policies last year while citing the pandemic, according to a joint tracking effort by the Centre for Law and Democracy and Access Info Europe.

Open-government advocates have started to worry about potential long-lasting effects.

The pandemic could "give cover for emergency measures to come into force that could then over time become permanent,” said Joe Powell, deputy CEO of the Open Government Partnership, a Washington, D.C.-based nonprofit that works with governments in 78 countries, including the U.S., to promote transparency and public participation.

Even before the pandemic, some government agencies routinely blew past their own deadlines for responding to public records requests. But the number of such cases has grown over the past year, according to AP interviews with government watchdog groups.

New data indicates there has been both a higher demand for government information during the pandemic and longer waits to obtain it.

State, county and city governments experienced a sixfold increase in their time spent on public records requests last year, rising from an average of 346 hours in the first quarter to 2,121 hours by the last quarter, according to an analysis by GovQA, a company that provides cloud-based software to manage public records requests.

That surge was driven by both the volume and complexity of requests. After shutdowns led to a dip in records requests accepted by government agencies from April to June, the number of such requests shot up by 23% over the rest of the year, according to the GovQA data.

The AP last May sought copies of communications about the coronavirus between governors' offices, state health directors and groups representing businesses, health care providers and local governments. By August, the AP had received records from about one-third of the states, revealing that some governors had allowed businesses to help write the reopening rules affecting their own industries.

After months of repeated AP inquiries, Ohio Gov. Mike DeWine's office on March 3 released just two documents from last spring — one from a hospital association proposing criteria for resuming elective procedures, the other from a mayor's group about guidelines for opening swimming pools and camps. A spokesperson for the Republican governor apologized for the delay, citing “human error” for a breakdown of staff communication.

Delaware Gov. John Carney was one of several chief executives who initially suspended the state’s response deadline for public records requests during the coronavirus emergency. With no end to the pandemic in sight, the Democratic governor reversed course and lifted the suspension in September.

But Carney’s administration did not fulfill the AP’s request until Feb. 10, when it provided 109 pages of documents and a note that more could come later. Though most were merely press clippings, the records included emails from representatives of car dealers, home builders and other industries seeking to keep operating during a shutdown.

More than a half-dozen states — Connecticut, Hawaii, Indiana, Mississippi, New Hampshire, Rhode Island and Washington — continue to suspend some open-records requirements through gubernatorial orders, according to an AP review of public-records policies.

Hawaii Gov. David Ige, a Democrat, took the most sweeping action when he suspended the state’s entire open-records law in March 2020. Ige eased the suspension under pressure from open-government advocates. But his most recent order, issued in February, still allows deadlines to be suspended if hard copies of documents are inaccessible, staff are backlogged with other requests or a response would pull agency employees away from other COVID-19 work.

Some state legislatures also relaxed response deadlines for records requests during the pandemic.

The Missouri House in February overwhelmingly passed legislation that would suspend response requirements whenever governmental bodies are closed for extended periods. That bill is now in the Senate.

Some local governments also have rolled back records law suspensions.

Last April, Virginia's Albemarle County, which surrounds Charlottesville, extended indefinitely the deadlines to respond to records requests. The county board later softened that stance before finally repealing the extension in November — a move that came shortly after state Attorney General Mark Herring, a Democrat, said state law does not allow local governments to modify such deadlines.

“The ordinance was not intended to get out of the responsibilities that we have under the Freedom of Information Act,” she said. “It was really in response to the pandemic.”

The Dallas Independent School District suspended all records requests for seven months while its employees were working from home with laptop computers. Staff likely could have processed some requests for electronic records. But because the legal team was unable to access other records stored in offices, it chose not to process any requests “in order for everyone to be on the same playing field,” district spokesperson Robyn Harris said.

When staff returned to in-person work on Oct. 7, the school district had a backlog of 424 records requests, she said.

Among those was a July 7 request from Keri Mitchell, executive director of the Dallas Free Press, seeking information about internet hot spots provided for students’ families during the previous school year. By the time she finally received the information, Mitchell had moved on to other news stories.

“If we can’t get timely responses to open-records requests, we can’t get people actual answers,” she said. “It just creates another barrier to the information people need to literally survive.”