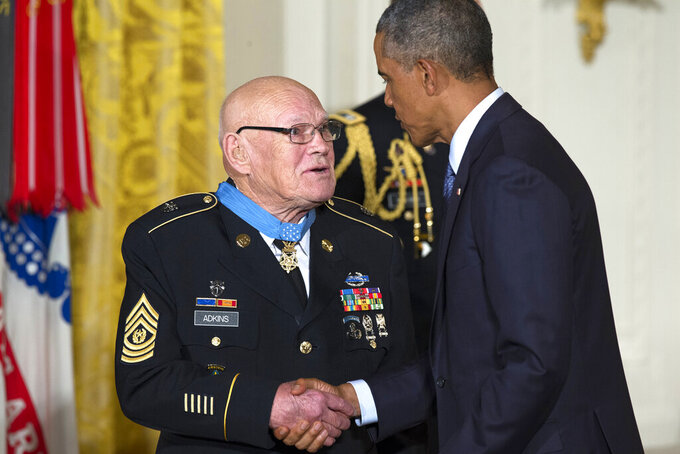 FILE - In a Monday, Sept. 15, 2014 file photo, President Barack Obama, right, shakes hands with retired Army Command Sgt. Major Bennie G. Adkins after presenting him with the Medal of Honor, in the East Room of the White House, in Washington. Bennie G. Adkins, who received the Congressional Medal of Honor for his heroism during the Vietnam War, died from complications from coronavirus. The Bennie Adkins Foundation announced the death on social media Friday, April 17, 2020. (AP Photo/Evan Vucci, File)

MONTGOMERY, Ala. (AP) — Alabama Gov. Kay Ivey said Tuesday she intends to keep a stay home order in place through April, striking a measured approach as some Southern states push to quickly reopen.

Ivey for now intends to keep a stay home order active through April 30 and will decide next week on what can reopen, saying the decisions will be driven by data and not a desire to hit a date.

“No one wants to open up businesses more than I do,” Ivey said at a news conference. “All of our decisions that I’m going to make are going to come from data, not a desired date.”

State Health Officer Scott Harris said the state is “not quite there” on meeting the White House recommendation of 14 days of declining cases before proceeding to an additional phase of reopening as the global pandemic continues.

The Alabama Department of Public Health said Tuesday that the state has more than 5,100 cases of coronavirus and 144 confirmed deaths from the virus. State health officials are investigating another 30 or so reported deaths in COVID-19 patients. Harris said the state had been reporting 200 or more new cases a day, but now the number is under 200.

Ivey expressed concern that the testing has not been adequate in the state but could not give benchmarks on what would be an adequate level. There have been about 48,000 tests conducted in Alabama, a state with a population of 4.9 million.

“We are not testing enough yet. We are little bit less than 1 percent of our population and we need to do a whole lot more testing to get up the speed,” Ivey said.

The governor suggested last week that the opening of the economy would likely take a tiered approach, with some segments opening before others and that areas with widespread outbreaks might have more restrictions.

Ivey is receiving mixed feedback on whether to cancel or extend closure orders. The governor asked for recommendations from the state’s congressional delegation.

Rep. Mo Brooks said Monday that his office recommended an immediate end to the stay-home order.

Ivey praised people’s cooperation with the stay home order, saying that has limited the spread of the virus.

“What we’re doing is working. I plead with the people of Alabama keep doing what you are doing,” Ivey said. "It’s been a challenging month. We’ve lost too many of our loved ones and our way of life has been turned upside down. But better days are ahead. We all look forward to that.”

For most people, the virus causes mild or moderate symptoms, such as fever and cough that clear up in weeks. For some, especially older adults and those with existing health problems, it can cause more severe illness, including life-threatening pneumonia.