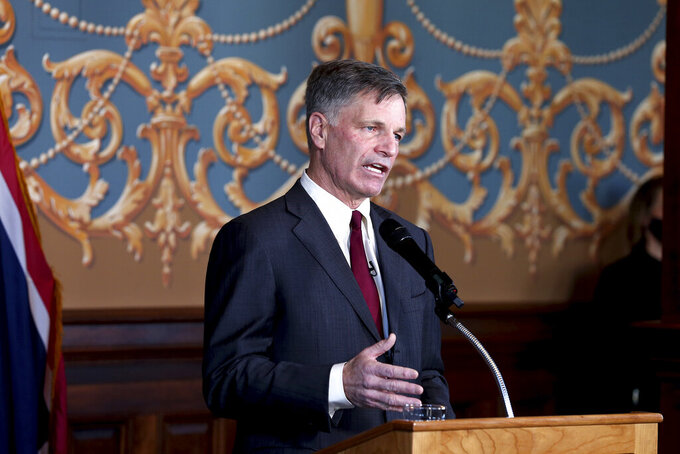 Wyoming Gov. Mark Gordon gives the State of the State address to the 66th Wyoming Legislature Tuesday, March 2, 2021, inside the state Capitol. Gordon gave the speech virtually from the Historic Supreme Court room as members of both chambers watched the live-streamed speech from their chambers. (Michael Cummo/Wyoming Tribune Eagle via AP)

CHEYENNE, Wyo. (AP) — The governor of Wyoming, the top coal-mining state in the nation, announced a goal Tuesday to capture more carbon dioxide than the state emits, as he criticized plans taking shape under President Joe Biden intended to limit climate change.

“They claim to follow the science but they adopt policies that resemble science fiction," Gov. Mark Gordon, a Republican, said in his state of the state address.

Prioritizing renewable energy over technology to keep carbon dioxide from power plants out of the atmosphere is a “crazed pursuit,” Gordon said about Biden's plans.

A tumultuous year of the pandemic and low oil prices has forced Wyoming to make steep spending cuts, but better days lie ahead, Gordon said.

He praised Wyoming's response to the pandemic that has kept schools open and businesses viable, and said vaccine distribution was going smoothly. Wyoming could see a tourism “bonanza” if pent-up demand for travel brings visitors to the state this summer, he said.

Still, Wyoming isn't out of the woods yet with the virus and economic turmoil, Gordon said.

He urged lawmakers meeting in Cheyenne over the next month to find a way to fund public education amid declining revenue from the state’s coal, oil and gas extraction industries.

Gordon has also ordered a statewide review of how a Biden administration pause in leasing federal land for oil and gas drilling will affect state agencies. Recently, Gordon joined 16 other Republican governors in asking Biden to lift the moratorium.

“I have had phone calls with Biden’s top climate officials explaining our position and demanding relief,” Gordon said.

Gordon has long advocated developing technology to capture carbon dioxide from power plant smokestacks and pumping it underground so it won't enter the atmosphere.

“The use of coal is under assault from all directions,” Gordon said. “Paradoxically it s that very industry that offers the best and most efficient way to remove CO2 from our atmosphere.”

Many states talk about becoming carbon-neutral with emissions, Gordon said.

“Today, I challenge you to join me in making Wyoming net negative in CO2 emissions," he said. “Fossil energy makes that possible. We have to take the lead and not look back.”

He didn't offer specifics but called for more use of hydrogen to power vehicles and more research at the University of Wyoming and at a coal-fired power plant near Gillette into carbon capture.

Vast open-pit coal mines near Gillette supply about 40% of the nation's coal, much of which fuels power plants in the Midwest. U.S. coal production has been in steady decline, down by about one-third over the past decade.

“Wyoming is embracing solar and wind development," Gordon said. “Both are emerging and important parts of Wyoming’s total energy portfolio. But we are not fooled by false promises either. We want to see what can be done.”

The Wyoming Republican Party voted overwhelmingly to censure Cheney for the vote. Gordon and other major state elected officials have stood by her.