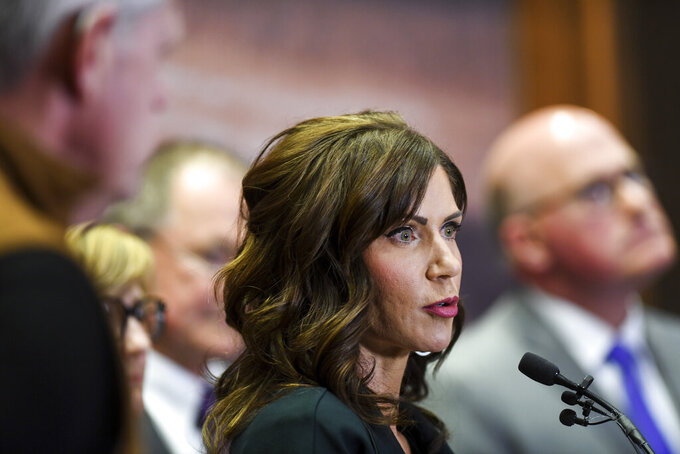 FILE - In this March 17, 2020, file photo, South Dakota Gov. Kristi Noem gives an update on the coronavirus in South Dakota, at the Sanford Center in Sioux Falls, S.D. Some of the nation's governors' offices routinely block access to public records to keep the public in the dark about key decisions involving the coronavirus pandemic. Noem's outspoken business-as-usual approach throughout the coronavirus pandemic has made her a darling of national conservatives and allowed her to hopscotch across the country as a fundraising force. (Abigail Dollins/The Argus Leader via AP, File)/The Argus Leader via AP)

PIERRE, S.D. (AP) — South Dakota Gov. Kristi Noem's outspoken business-as-usual approach throughout the coronavirus pandemic has made her a darling of national conservatives and allowed her to hopscotch across the country as a fundraising force.

But the public cannot see emails on how she made her decisions or how much state taxpayers are spending for her traveling security detail.

Despite Noem’s 2018 promise “to throw open the doors” of government, the South Dakota governor's office has denied requests for both records, citing broad exemptions to the state's sunshine law. Her state is among half a dozen where governors' offices routinely block access to executive records, keeping the public in the dark about decision making and possible influence peddling by special interests.

“Things that are in the public’s interests are still being hidden from the public," said Jack Marsh, a former executive editor of The Argus Leader newspaper and co-founder of the nonprofit South Dakota News Watch.

He said South Dakota's open-records laws are “some of the weakest in the country" and noted that there has been little advancement of transparency under Noem's administration other than a 2019 law that shields reporters from being forced to reveal sources.

In most states, sunshine laws give the public insight into the governor’s decisions. Since last year, governors across the country have provided thousands of pages of emails in response to requests filed by The Associated Press, revealing how some pushed economic interests ahead of public health guidance as they battled the pandemic.

But Noem and governors in five other states — Arkansas, California, Massachusetts, Michigan and New Jersey — have thwarted records requests by citing exemptions.

Her administration has refused to disclose how much it costs to send state troopers with her as she travels the country campaigning for former President Donald Trump and raising her own campaign cash. The governor’s office has cited state law exempting security details from records requests and argued that providing the information would “put lives in danger.”

Several GOP lawmakers pushed the governor's office to disclose its annual security costs to the Legislature. But Noem, a fellow Republican, pressured them to drop the matter.

When the AP sought records detailing how businesses belonging to Noem's brothers received over $600,000 from a state pandemic grant program pushed by the governor, those too were denied under the state's exemptions for disclosure.

In California, Gov. Gavin Newsom's office last year denied an AP request for communications showing how the Democratic governor made decisions related to the virus outbreak.

California's exemption dates to 1968 with legislation enacted under then-Gov. Ronald Reagan that shielded all documents belonging to the governor's office.

David Snyder, executive director of the First Amendment Coalition in San Francisco, called the exemption a “big barrier” to gaining insight into how Newsom’s office was communicating with public agencies.

Such a blanket rule “sweeps far too broadly and keeps out of public view a range of communications that really should not be exempt from public scrutiny,” Snyder said.

Lawmakers, newspapers and open-government advocates have pressed over the years to narrow the exemptions. But after the Los Angeles Times sued in 1988 to get appointment calendars and other records that would show the governor's daily activities, the state Supreme Court ruled the public interest was better served by not disclosing the calendar.

Today, Newsom discloses his monthly calendars, as Gov. Jerry Brown did before him. But they come with caveats. Pointing to the earlier court decisions, Newsom’s lawyers write that they “will not disclose entries that reveal the deliberative process” and note the calendars are an incomplete look at the governor's activities.

Massachusetts' exemptions can be traced to a 1997 ruling in a case seeking access to a questionnaire completed by the governor's nominee to the state's high court. The ruling denied the request to make the questionnaire public while also finding that the state’s public records law does not expressly include the Legislature, judicial branch or governor's office.

Secretary of the Commonwealth William Galvin, the state’s top public records official, said he agrees that a governor needs the freedom to seek a range of opinions. But he said the interpretation of the 1997 court decision has become too broad, sweeping up nearly all information a governor wants to keep secret.

In New Jersey, the pandemic has given the governor another way to deny records requests. Gov. Phil Murphy, a Democrat, has said his administration is dedicated to transparency, but the governor’s office also has blocked multiple requests for information.

It rejected the AP's email request on the grounds it was “overbroad,” a kind of catch-all denial under the state’s Open Public Records Act. It also cited the 2005 Emergency Health Powers Act, which dates to Hurricane Katrina and says reports and other records made during an emergency are not considered public. The state has been under such an order for a year because of the pandemic.

Murphy used the Katrina-era law to deny AP's request for reports to the governor's office on hospital and nursing home capacity. Other news organizations say they have been denied on the same grounds. That includes The USA Today Network, which operates across New Jersey and had sought records showing how the state managed protective gear.

NJ Advance Media, which publishes the Newark Star-Ledger, unsuccessfully sought agreements the state made with laboratories and consultants related to the coronavirus.

That was not lawmakers’ intent when the bill passed, said Democratic Senate Majority Leader Loretta Weinberg, who was a co-sponsor of the law.

“When we are in a crisis like this, people have to have faith in their leadership because they’re asking us — demanding of us — some pretty big personal sacrifices and with good reason,” she said in an interview last year. “I’m not questioning any of that. But because our residents need to have complete faith in the leadership, then it is more important that they be completely honest.”