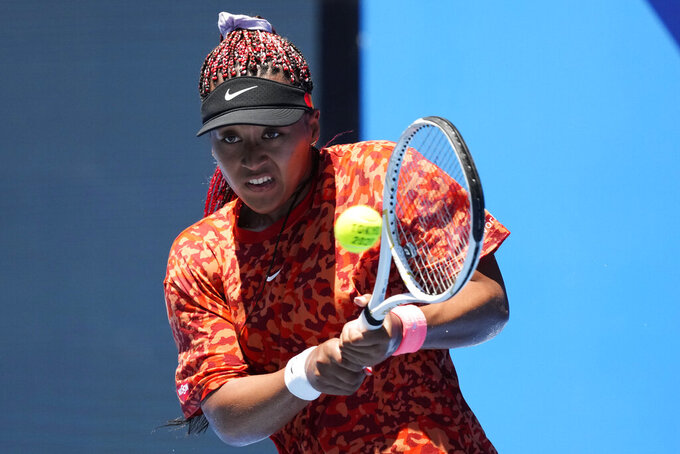 TOKYO (AP) — What a moment for Naomi Osaka. For the new Japan. For racial injustice. For female athletes. For tennis.

The four-time Grand Slam winner lit the cauldron at the opening ceremony of the Tokyo Olympics on Friday.

It was a choice that could be appreciated worldwide: In Japan, of course, the country where Osaka was born and the nation that she plays for; in embattled Haiti because that’s where her father is from; and surely in the United States, because that’s where the globe’s highest-earning female athlete lives and where she has been outspoken about racial injustice.

Plus, everywhere in between, because Osaka is a superstar.

But she has often received an uncomfortable welcome in Japan because of her race, with her family having moved to the U.S. when she was 3. Her emergence as a top tennis player has challenged public attitudes about identity in a homogeneous culture that is being pushed to change.

It’s always a mystery until the last moment who gets the honor of lighting the cauldron.

Sadaharu Oh, Shigeo Nagashima and Hideki Matsui were among the baseball greats who took part in bringing the flame into the stadium. And in a country where baseball is the No. 1 sport, Osaka was not necessarily expected to be given the ultimate honor.

But there she was at the center of the stage when a staircase emerged, the cauldron opened atop a peak inspired by Mount Fuji and Osaka ascended with the Olympic and Japanese flags blowing in the breeze off to her left. She dipped the flame in, the cauldron ignited and fireworks filled the sky.

“Undoubtedly the greatest athletic achievement and honor I will ever have in my life,” Osaka wrote on Instagram next to a picture of her smiling while holding the flame. “I have no words to describe the feelings I have right now, but I do know I am currently filled with gratefulness and thankfulness.”

It capped quite a series of events over the past two months for the 23-year-old Osaka.

Going into the French Open in late May, Osaka — who is ranked No. 2 — announced she wouldn’t speak to reporters at the tournament, saying those interactions create doubts for her.

Then, after her first-round victory, she skipped the mandatory news conference.

The next day, Osaka withdrew from Roland Garros entirely to take a mental health break, revealing she has dealt with depression.

She sat out Wimbledon, too. So the Tokyo Games mark her return to competition.

“The Olympics are a special time, when the world comes together to celebrate sports. I am looking forward most to being with the athletes that had waited and trained for over 10 years, for celebrating a very hard year (2020) and having that happen in Japan makes it that much more special,” Osaka wrote in an email interview when she was selected as the 2020 AP Female Athlete of the Year. “It’s a special and beautiful country filled with culture, history and beauty. I cannot be more excited.”

There was a big hint that Osaka might have an important role in the ceremony when her opening match in the Olympic tennis tournament was pushed back from Saturday to Sunday without an explanation earlier in the day.

She was originally scheduled to play 52nd-ranked Zheng Saisai of China in the very first match of the Games on center court Saturday morning. But clearly by lighting the flame as midnight approached, she wouldn’t have had enough rest for an early morning match.

Osaka became the first tennis player to light the Olympic cauldron. She’s also one of the few active athletes to be given the honor. Australian sprinter Cathy Freeman lit the cauldron for the 2000 Sydney Games and went on to win gold in the 400 meters.

Osaka — along with top-ranked Ash Barty — is a favorite to win the women’s singles title in a tennis tournament that also features Novak Djokovic aiming to become the first man to win a Golden Slam by holding all four Grand Slam trophies and Olympic gold in the same year.

Whatever the final results on the court, Osaka has already become part of Olympic history.