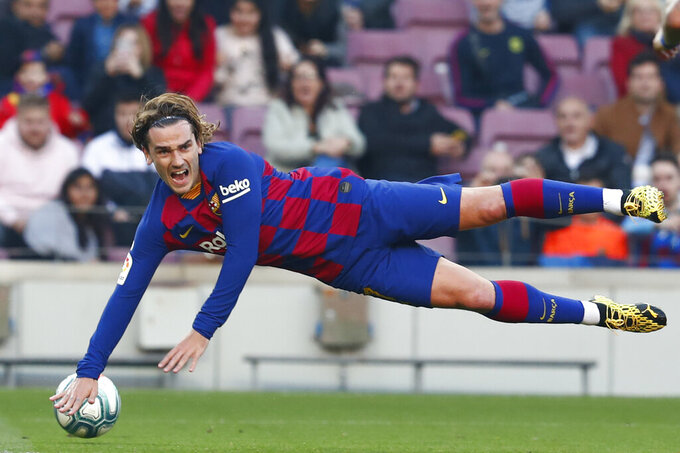 FILE - In this file photo dated Saturday Feb. 22, 2020, Barcelona's Antoine Griezmann falls during a Spanish La Liga soccer match against Eibar at the Camp Nou stadium in Barcelona, Spain. Griezmann arrived to Camp Nou last summer with the task of completing an intimidating strike trio with Messi and Suárez, but one year later, the French world champion can barely get on the pitch, and was left out of Barcelona’s starting 11 on Tuesday June 30, 2020. (AP Photo/Joan Monfort, FILE)

One year later, the World Cup champion from France can barely get on the field as Barcelona tries to defend its Spanish league title.

Griezmann was left out of the starting lineup for the second straight game on Tuesday when Barcelona hosted Atlético Madrid, the Frenchman's former club, in a game it needed to win to stay neck-to-neck with league leader Real Madrid.

After having Griezmann warming up on the sideline for most of the second half, Setién sent him on in the 90th minute even though his team had conceded an equalizer nearly half an hour before.

No miracle goal came, and the 2-2 draw left Barcelona one point behind Madrid, which can open a four-point lead with five games remaining if it beats Getafe on Thursday. Madrid also holds the tiebreaker if they finish even on points.

“It's true that it's not normal for a world champion to be brought on so late in the match. It can be hard for a player of his class, but the circumstances called for it,” Setién said. “You always hope that a player of his talent can win the game for you with an individual action. But I understand it is hard for him.

In July 2019, Barcelona paid 120 million euros (then $134 million) to trigger the buyout clause in Griezmann's contract with Atlético, where he had emerged as one of Europe’s top forwards. In his five seasons at Atletico, he scored 133 goals and helped the team win a Europa League title, a Spanish Super Cup and a UEFA Super Cup.

The idea was that Griezmann could finally fill the void left by Neymar up front when he bolted for Paris Saint-Germain in 2017.

That price was considered a good deal in the pre-pandemic market. Now, Barcelona is faced being saddled with a second major signing in a row that has flopped. Barcelona paid a club record 160 million euros ($192 million) for Philippe Coutinho in 2018, only to send him out on loan a year and a half later.

Griezmann started off the season well enough, scoring eight goals before the winter break. But his numbers started to dwindle and he has yet to score since the resumption of the league after a three-month stoppage caused by the coronavirus pandemic.

As his goal production has decreased, so have his minutes. He has only started two of five matches since the restart of the competition, and he is not being counted on for games against major rivals, playing only 11 minutes in a 0-0 draw against Sevilla.

Setién has instead chosen Puig, 17-year-old Ansu Fati and Martin Braithwaite over Griezmann.

Barcelona now needs Madrid to slip up and improve its own performances to win a third straight league title.

The question is whether Griezmann can be a piece of that comeback plan.