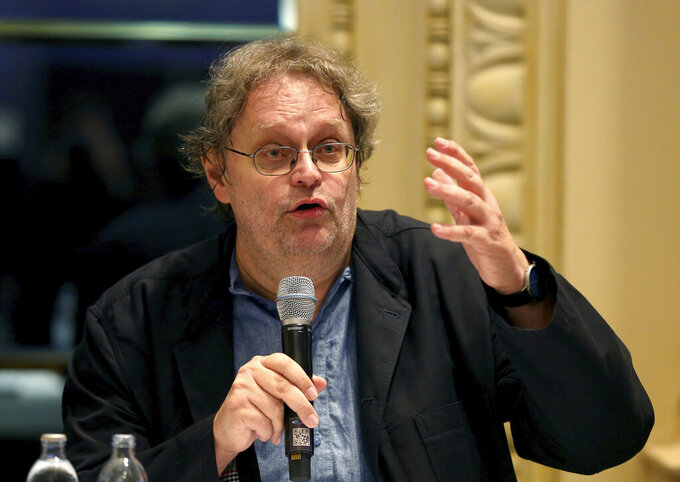 Chairman of the consumer protection association Peter Kolba speakes during a press conference of a class action lawsuit against the Tirol regional authorities for failing in their public health duties, related to the virus outbreak in the ski-resort of Ischgl, seen as a key location from which the virus spread across Europe, in Vienna, Austria, Wednesday, Sept. 23, 2020. (AP Photo/Ronald Zak)

VIENNA (AP) — An Austrian consumer protection group said Wednesday it has filed four civil lawsuits against the country's government for failing to contain a coronavirus outbreak at an Alpine ski resort that has been blamed for thousands of infections worldwide during the early phase of the pandemic.

The chairman of the Consumer Protection Association, Pete Kolba, said the cases —involving an Austrian and three Germans — will test the ground for a class action on behalf of 1,000 people who fell ill with COVID-19 following a trip to Ischgl in February and March.

The outbreak in Ischgl, a popular resort in western Austria, is considered one of Europe's earliest "super-spreader" events of the pandemic.

Kolba said his association, which is known by its German acronym VSV, has been contacted by 6,000 people from 45 countries, including Iceland, the Netherlands, Ireland and the United States. About 80% of them tested positive for the virus after returning from Ischgl and at least 32 people from the resort cluster have died.

He accused authorities of being beholden to the interests of the local tourism industry in the Paznaun Valley, where Ischgl is located. Numerous infections allegedly were acquired in cramped apres-ski bars where tourists often party the night away after a day on the slopes.

Kolba also placed some of the blame on Austrian Chancellor Sebastian Kurz, for declaring on March 13 that the valley would be placed under quarantine later that day, triggering the hasty departure of thousands of guests and seasonal workers.

“When it comes to managing the departure...Chancellor Kurz is probably the one who caused the chaos,” Kolba told reporters in Vienna. “What he did was reveal that something would happen and created an impossible situation for the police on site.”

He said authorities had enough information by March 7 to warn new arrivals about the virus but failed to do so. When the government imposed a regional quarantine on the Paznaun Valley on March 13, some 10,000 foreign tourists were told to leave Austria, but officials only collected contact details for 2,600, he said.

Kolba urged Kurz to consider convening a “round table’” of resort visitors and authorities in the western state to discuss how to compensate people without going to trial.

He indicated that a simple apology wouldn't suffice.

“If someone is found in Tyrol today who says specifically what mistakes were made, if they apologize without ifs and buts, and then says how many millions will be set aside to compensate the tourists instead of building new cable cars, then that's a good first step," Kolba said. “But that would surprise me.”

Alexander Klausner, a lawyer for the VSV, said one of the four cases was submitted Tuesday on behalf of relatives of a man who died as a result of COVID-19. Two other plaintiffs are still suffering from the effects of their illnesses, while a fourth had only a mild case.

Kolba said the plaintiffs are seeking damages of up to 100,000 euros ($118,000) each from Austrian federal authorities, who hold ultimate responsibility for enforcing health regulations.

U.S.-style punitive damages aren't possible under Austria's legal system, but courts can rule that plaintiffs deserve money for pain and suffering, and for loss of earnings.