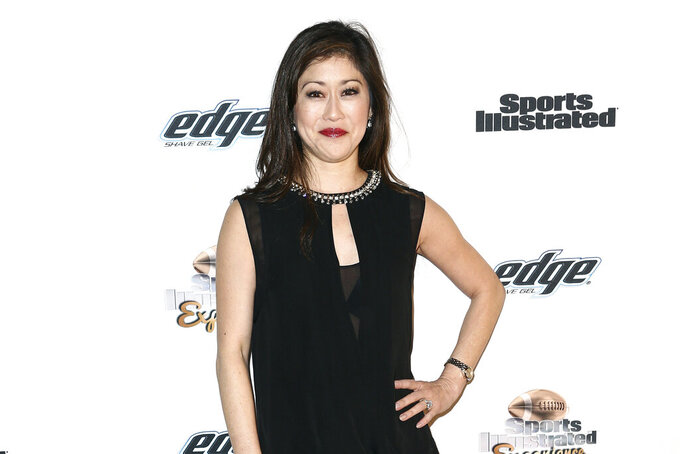 FILE - In this Feb. 5, 2016, file photo, Kristi Yamaguchi attends the Sports Illustrated Super Bowl Party held at 1015 Folsom in San Francisco. Unable to stage its annual major fundraiser due to the coronavirus pandemic, Figure Skating in Harlem is going from the ice to the internet.The Figure Skating in Harlem Champions in Life Virtual Gala will be held on May 14 and will feature Olympics champions Scott Hamilton, Kristi Yamaguchi and Meryl Davis. (Photo by John Salangsang/Invision/AP, FIle)

Unable to stage its big fundraiser because of the pandemic, Figure Skating in Harlem is going from the ice to the internet.

The Figure Skating in Harlem Champions in Life Virtual Gala will be held May 14 and will feature Olympic champions Scott Hamilton, Kristi Yamaguchi and Meryl Davis.

The 23-year-old group is the only organization for girls of color that combines education with access to the athletic and artistic discipline of figure skating.

“Pivoting is a skating term,” says Sharon Cohen, the organization's founder and CEO, “and we pivoted and decided we could showcase the show virtually. Anybody can log on to the gala, it is free to watch, and we hope people will support us through it.

"We took the basic structure of our gala and asked what could we adapt? Certainly our creed, speeches by the girls, our seniors growing up in the program. And lots of celebrities.”

Honorees this year are FSH Alumnus and Goldman Sachs Vice President Sherrie Smith; Olympian JoJo Starbuck; and Angela Thompson Howard, UPS vice president of human resources. The hosts will be sportscaster Andrea Joyce and newsman Harry Smith. Among those appearing will be Condoleezza Rice, the former secretary of state who figure skated as a youngster, and comic Andy Cohen.

“They are bringing in personalities to add to the virtual aspect of all this and to be able to send a quick message of support and encouragement,” says Yamaguchi, whose educational initiative, Always Dream, also is in its 24th year.

“I got to see kind of up close the leadership and some of the skills they kind of teach the girls,” she adds.

The annual show was called off in March, two days before it would have hit the ice. Everything from theme (environmental sustainability), costumes and choreography were set.

“We gave ourselves 10 days and we set up a virtual skating community as though nothing changed,” Cohen explains. "But our focus really became on emotionally supporting the girls, and giving them some health and fitness.

“Everyone got upended, they all had to learn to work online. Much of what we do happens off the ice anyway, so the education and leadership pieces of our organization were able to go."

FSH and its offshoot, Figure Skating in Detroit, which 2014 Olympic champion Davis helped launch, have about 300 young women in their programs. Some of them recently met U.S. Supreme Court Justice Sonia Sotamayor.

“The prospect of making an impact and hopefully changing someone’s trajectory in their life,” Yamaguchi says, “having that opportunity is an honor. And when I see organizations like Figure Skating in Harlem and how they do it, it inspires me even more. They homed in on the formula and stayed true to their mission, done an amazing job.”

“We want it to be uplifting and fun, and also in COVID-19 pandemic, communities of color have been hit the hardest,” Cohen says. “It’s more important than ever to be there for our families and our young women to help them develop that resilience. When you stick to the message that is true, you kind of can’t go wrong."