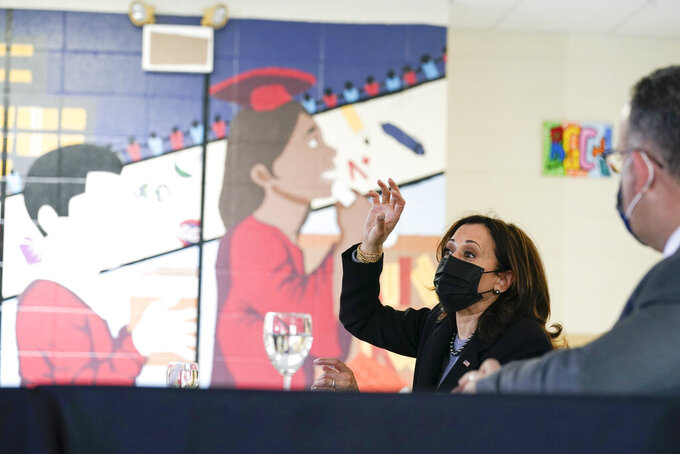 Vice President Kamala Harris praised Connecticut officials Friday for how the state plans to spend some of the billions of dollars from the newly passed coronavirus relief package on education and child care initiatives, noting the pandemic has given policymakers an opportunity to address longstanding challenges.

The Democrat, who made her first visit to the state since the November election, held a “listening session” on child poverty and education with U.S. Secretary of Education Miguel Cardona, the state’s former education commissioner, as well as state and federal officials at the Boys & Girls Club of New Haven. She later visited the West Haven Child Development Center.

"I do believe the pandemic has been an accelerator and also highlighting and making very clear the fractures and the fissures and the fault lines in our systems,” she said. “And this is a moment that, as we look at where we are, it is a moment to leapfrog over what might have otherwise been incremental change to actually fast-forward and address some of those long-standing issues that have affected our children.”

Harris lauded Connecticut officials, including Democratic Gov. Ned Lamont, for how the state plans to spend its share of the $1.9 trillion American Rescue Plan. The governor announced Friday his administration will release $210 million of the federal funding it has received to support early childhood programs across the state.

“There is a reason that we're here,” said Harris, who called Connecticut's plan a model for the nation. “It's a big country, right?”

Under Lamont's plan, $50 million will be set aside over two years to pay for child care services through the state's existing Care 4 Kids program for parents enrolled in higher education and approved workforce training programs. This would include parents who lost their jobs during the pandemic and need retraining for new employment.

Also, $120 million is earmarked for “operational stabilization grants” to help struggling child care businesses that were hit hard because of COVID-19. There will be a focus on providing grants to underserved communities. The plan also spends $26 million of the federal money over two years on high-quality child care programs that will pay “substantially higher market rates” to programs that have been accredited by the National Association for Family Child Care.

Other parts of the plan include covering fees for the approximately 15,000 families that receive child care subsidies from the state and initiatives to increase the wages of child care workers. Lamont's office said it will “work collaboratively” with the General Assembly to finalize the plan.

Harris was greeted by mostly cheering and waving bystanders as her motorcade proceeded from Tweed New Haven Airport to the Boys & Girls Club. The vice president said she came to Connecticut to discuss child poverty and education, especially in light of the coronavirus pandemic. Also, she wanted to discuss what resources were available to the state over the past year and what resources were not, as well as the “lingering effects we need to address in Washington," including the mental impacts. Her trip is part of the administration’s “Help is Here” tour, launched after passage of the sweeping pandemic relief package.

U.S. Rep. Rosa DeLauro, also a Democrat, predicted the American Rescue Plan, which increases the child tax credit that she hopes will eventually become permanent, will lift 608,000 children “out of poverty” in Connecticut. The plan, recently signed into law by President Biden, increases the current credit from $2,000 to $3,600 for children under age 6, and $3,000 for other children under age 18, among other changes.

“In our state of Connecticut, one-third of kids will be lifted out of poverty, one half out of deep poverty,” DeLauro said of the new federal legislation. “And it is really extraordinary what that expansion, of what a lifeline it is to the people of this state and our community.”