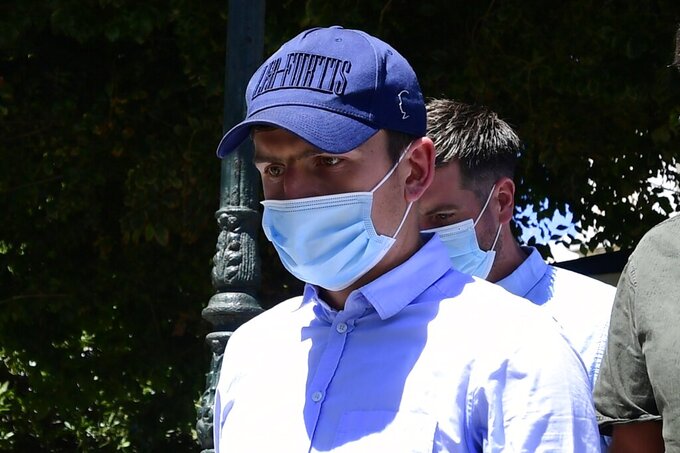 England soccer player Harry Maguire leaves a court building on the Aegean island of Syros, Greece, on Saturday, Aug. 22, 2020. The Manchester United captain was arrested during a brawl on the neighbouring holiday island of Mykonos. (AP Photo/Michael Varaklas)

LONDON (AP) — England defender Harry Maguire was called up Tuesday for England's UEFA Nations League games next month despite being arrested while on vacation in Greece.

England coach Gareth Southgate said the defender apologized for being detained after a brawl last week on the island of Mykonos but he was allowed to return to England.

Southgate continues to back Maguire, who denies wrongdoing.

“He has got my support at this moment,” Southgate said on a media video call. “Harry regrets the fact he has brought that sought of focus and attention on the team and he apologized for that, but he has his own side of the story that will come out.”

Maguire's trial started earlier Tuesday in Greece without him being required to attend the hearing. After the session started, the Syros court called a recess to consider procedural issues raised by Maguire’s lawyers. Maguire and two other defendants have been charged with assault and swearing in public, and Maguire has also been accused of attempting to bribe a police officer following his arrest.

Maguire has made 26 appearances for England, which plays Iceland on Sept. 5 and Denmark three days later.

“I have the insight into the story which is very different to what’s reported,” Southgate said. “You can only make decisions on facts you are aware of. Clearly if facts change or information changes I will have to review the decision.”

Southgate's side has not played this year due to the coronavirus pandemic, which led to the European Championship being postponed until 2021.